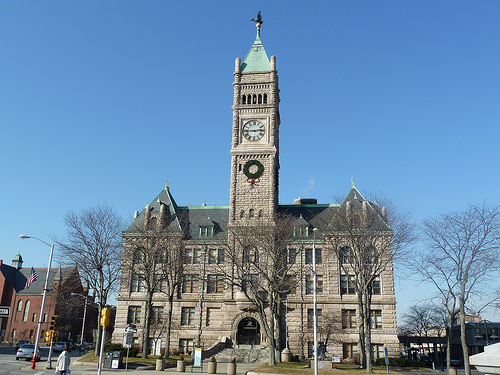 Cost of cleanup of homeless parks – Because of hazardous conditions, mostly used needles, the city is composing an RFP for an outside company to do cleanups of these parks. Manager Murphy says he is contemplating training a team from the city’s DPW to do the work in the future. Councilor Mercier says that if we paid all DPW works an additional $2000 for taking this training plus the costs of equipment, it would be much cheaper than hiring a private company to do it each time it was needed. Councilor Leary concurs with Councilor Mercier.

Council authorizes City Manager to accept/expend $400,000 state grant pursuant to Complete Streets Program. Will be used for lighting for new walkway through the South Common (which also is to be funded by the same program).

Councilor Samaras request city manager prepare a report regarding rehab of the JFK Plaza and to permanently display the flags that represent the diversity of the community of Lowell. Samaras explains that the statue in front of JFK Plaza, of Officer Rouses, once had a working fountain, but it might be more suited for a memorial garden. He adds that during the Folk Festival, flags of various countries of origin of Lowell residents were flown on JFK Plaza. People commented favorably on it. He’d like the city to explore doing it permanently. Councilor Mercier says it’s a great motion. Explains that when she was mayor she instituted the ethnic parade at the start. She says as much was we love our flag, the other people in the city take great pride in the flags of their countries. Samaras adds that at the recurring Saturday-morning flag raisings, councilors repeatedly see all the pride people have in their ethnic heritage and this is a way to signal to them that we value their presence in the city.

Councilors Milinazzo and Samaras request city council go on record to re-affirm our working relationship/partnership with UMass Lowell which will continue to benefit the economic vitality of the city and its residents and to request the city manager to do what is necessary to preserve and strengthen this relationship/partnership. Councilor Milinazzo says he understands that there has been some positive movement recently which is positive. We didn’t file this motion to tie the hands of the city manager as has been suggested in some circles. He mentions the “draft” agreement which he thought was further along than it actually was. He thinks Mayor Kennedy’s press release helped clarify that. He then says there’s been a lot of talk in the city about the relationship being one sided [in favor of the University]. He disagrees with that sentiment and says the city accrues many benefits from UMass Lowell. He says there might be a tipping point but we’re not close to that yet.

Councilor Samaras concurs in Milinazzo’s remarks (including that Murphy is an excellent negotiator). He says there are many benefits to the city of Lowell from UML. No one can argue that the city would be better off without the university.

Councilor Mercier says she appreciates all the beautification done by UML and that it employs Lowell residents, and some other things. But the thorn that stuck in my side was residents who from Perkins Park who will be displaced. The ones with disposable income to support local businesses. The ones whose building will be off the tax rolls which everyone else will have to pick up. Our direction to the city manager was to get some balance in that relationship by reaching an agreement with UML. I take exception to the words “whatever is necessary.” That could mean to stop negotiations, to concede defeat and I won’t support that. Suggests possibility of extending Perkins’ leases until the Lipoli development is done. Asks why UML didn’t develop the old County Training School property it owns in North Chelmsford for dormitories. My obligation is to the people who reside here. I don’t work for the University. Our job is to protect those who are struggling so it is incumbent on the city manager to get the best bang for the community in his negotiations.

Councilor Milinazzo: I agree with most of what Councilor Mercier said. He also understands that some Perkins’ residents now qualify for first time home buyer assistance so they may be buying homes and staying in the city.

Councilor Elliott: Says he has supported every initiative brought to the city by UML. He’s been a cheerleader. He’s seen the benefits the University has brought. He’s not sure how we are not still in partnership with the university. When I made the motion to discuss the draft agreement, the manager just wanted to keep the council updated. I don’t think there was any attempt at any level to disrupt the relationship between the city and the university. Clearly the Perkins sale did disrupt the city’s finances so we took steps to protect the people who pay the bills.

Councilor Leary says sometimes in any business relationship there are bumps but he believes the relationship will continue.

Councilor Belanger says that the rhetoric of the last week has to stop. He says it’s the council’s responsibility to de-escalate the rhetoric. Just imaging where the city would be without the university and how important the university is to the city’s future. He has full faith that Murphy and Chancellor Moloney will reach a fair and equitable agreement.

Councilor Samaras clarifies that the wording of the motion did not suggest capitulating, but that the manager had the backing of the council. Also the purpose was to de-escalate the discussion in the city. I also wanted us to have the opportunity to say that we appreciate the university.

Belanger observes that other towns have already contacted the University offering space. The University is on the verge of creating incubator space for new businesses. We want them to stay right here in the city.

Councilors Leary and Leahy request city manager have DPW paint the crosswalks prior to the beginning of the school year.

Councilors Leary and Leahy request city manager provide outstanding work order tickets for the Lowell Public Schools and to have the DPW meet with the schools in order to coordinate time lines to complete outstanding tickets prior to the school year.