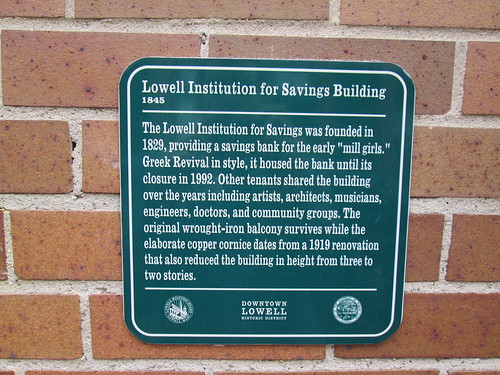 Example of downtown building sign created by Lowell Historic Board

The Lowell Historic Board has installed green signs, 9 inches square, on the sides of several buildings in downtown Lowell. Each sign explains the historic significance of the building. Nine signs have been erected thus far. Up to 75 of them are planned by the end of the year. Recently I followed the sign trail, photographing the buildings and capturing the text of the signs which I share below: 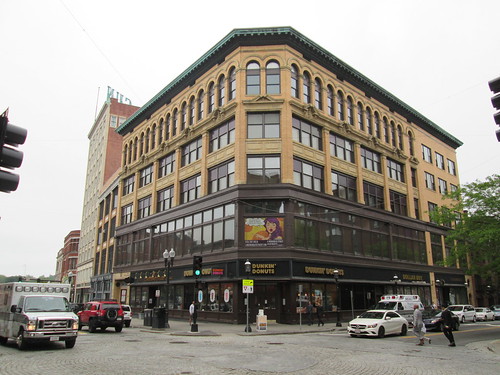 The third building on this site, clothing merchant Joseph Califoux built it for his department store, one of several large department stores historically found downtown. Renaissance Revival in style, the yellow brick façade contains the largest expanse of glass in any masonry building in historic Lowell while cast stone, a newly introduced material, was used for much of the exterior trim. Continuing in retail and office use after Chalifoux’s store closed in 1929, rehabilitation was completed in 2016 for residential use. 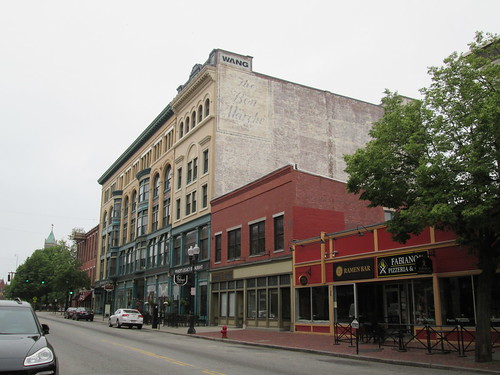 Before suburban shopping malls began springing up in the mid-20th century, downtown anchor department stores like the Bon Marche sold almost every product a family needed. This store consisted of four interconnected buildings built in various Victorian styles fronting on Merrimack and Kirk streets. In 1950, Jack Kerouac held a book signing here launching his first novel, The Town and the City. A Jordan Marsh department store operated here until 1991 and the complex was rehabilitated in 1995. 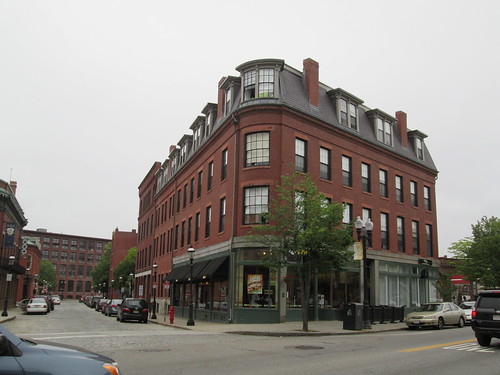 Greek Revival in style with a mansard roof added after an 1865 fire, this building housed a typical main street hardware store for over 100 years and originally contained a public meeting hall upstairs. One of many locations for lectures and recitals in early Lowell, Edgar Allan Poe spoke here in 1848. In an early preservation victory, demolition for a proposed parking lot was blocked in 1976 and the building was rehabilitated in 1980 for affordable elderly housing. 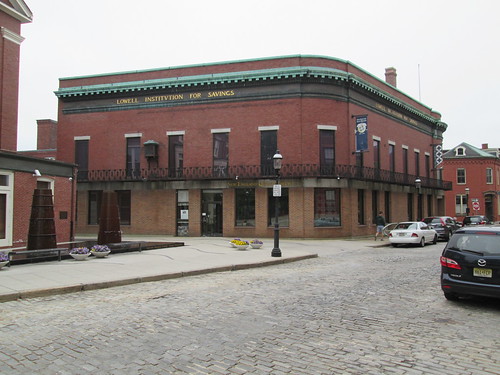 The Lowell Institution for Savings was founded in 1829, providing a savings bank for the early “mill girls.” Greek Revival in style, it housed the bank until its closure in 1992. Other tenants hared the building over the years including artists, architects, musicians, engineers, doctors, and community groups. The original wrought-iron balcony survives while the elaborate copper cornice dates from a 1919 renovation that also reduced the building in height from three to two stories. 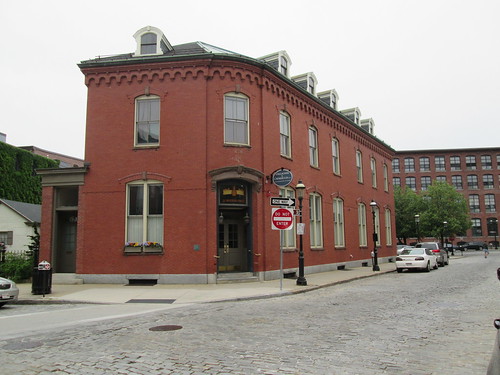 Established in 1849, the Lowell Gas Light Company supplied piped coal gas that lit the city’s mills, businesses, and street lamps. Designed in the more contemporary and elegant Italianate style, the building contrasted with earlier Federal and Greek Revival structures downtown. Built to house the company’s administrative offices, the original building was added on to several times, the last being a 1920s gable-roofed rear wing containing a gas appliance showroom. 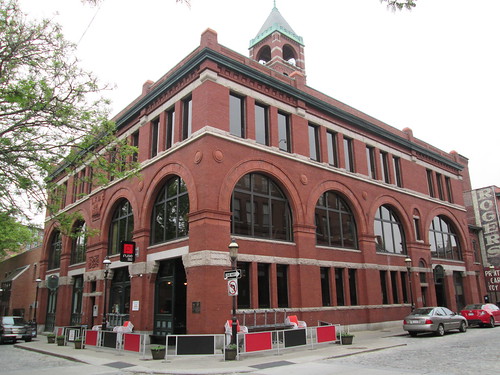 Lowell’s main fire station burned down in 1888 and although centrally located, was difficult to access on Middle Street. Palmer Street was cut through between Market and Merrimack streets in 1889, improving access, and this new firehouse was built fronting on the newly created street. Designed in the Romanesque Revival style by local architects Merrill and Cutler who also designed the current City Hall (1893), it served as Lowell’s main station until 1972. 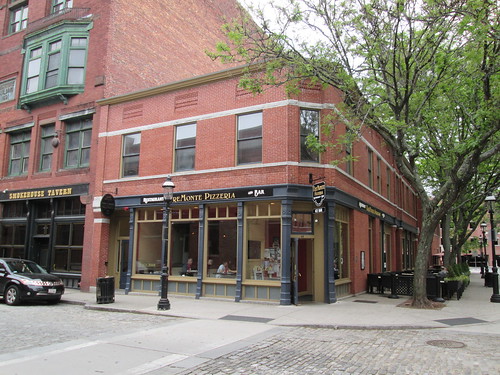 When Palmer Street was created in 1889, new lots along the street were quickly built upon including this corner building, designed in the Queen Anne style popular for Lowell commercial buildings in the 1880s and early 1890s. Originally five stories in height, the top three floors were removed during the Great Depression in order to reduce property taxes. After a fire gutted the building in 1991, it was at risk for demolition until being rehabilitated in 1993. 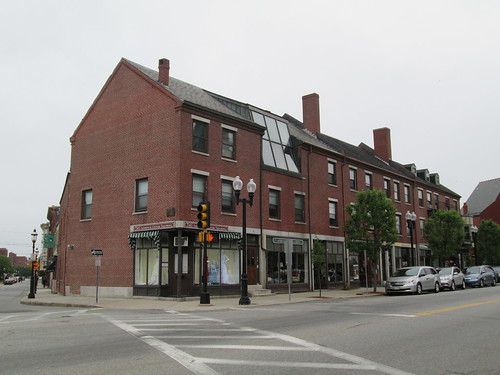 The first brick building built on Merrimack Street, this Greek Revival style structure has continuously housed businesses and residences since being built. Named for the brief tenancy of the Lowell Bank, the city’s first, another early occupant by 1829 was the Lowell Institution for Savings which moved to its own building on Shattuck Street in 1845. The large, sloping wall dormer skylight was a later alteration and provided northern light for a late 19th century photographer. 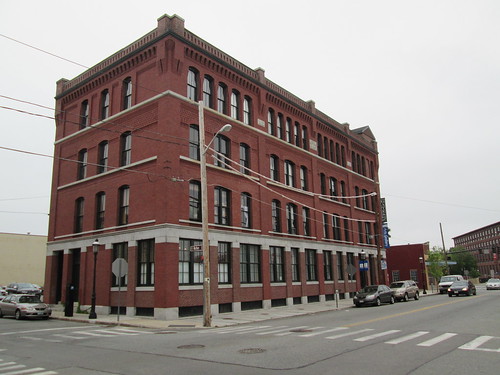 This Victorian Commercial-style building originally housed Josiah Gates and Sons, manufacturers of leather goods, whose products were distributed throughout the country from 1845 until the company closed in 1909. Also located here by 1885 was the manufactory for Moxie Nerve Food, a patent medicine that later became a soft drink. Other occupants through the years included machinists, a Greek newspaper, and, from 1955 onward, a flooring company. In 2013, rehabilitation was completed for use as an arts center.