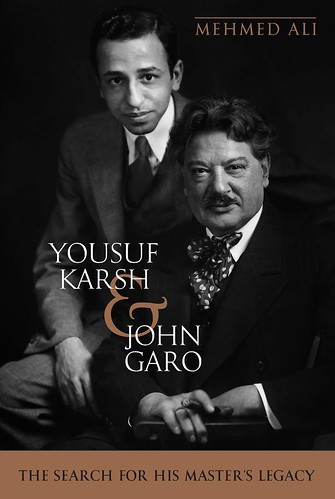 Our friend Mehmed Ali has written a new book: Yousuf Karsh & John Garo – The Search for a Master’s Legacy. This Thursday, May 5, 2016, at 6:30 pm, the Whistler House Museum at 243 Worthen Street will host a book launch. Everyone is invited.

The book is the story of two Boston-area photographers who together captured amazing images during the early- and mid- portions of the twentieth century. While not directly related to Lowell, this book is important to all of us for we live in an age where images are used more than ever before to tell stories, express feelings, and in an infinite number of other ways. Today, everyone with a cell phone is a photographer. This story of two master photographers will inspire and educate picture-takers of all level of ability. It is also a compelling human story.

Here is some additional information about the subjects of this book:

In the early years of the twentieth century, Garo was a nationally acclaimed photographer, a leader in the thriving Boston photographic community. Cultured and charming, Garo also painted watercolors, wrote poetry and counted among his friends luminaries in the worlds of music and theater. It was to this humanistic atmosphere of Garo’s sky lit studio that the fledgling photographer, Yousuf Karsh, a survivor of the 1915 Armenian Massacres, was sent by his uncle George Nakash, to be Garo’s apprentice.

Garo was a nurturing and encouraging mentor. His three years with Garo transformed young Karsh’s life and influenced his original desire to portray those personalities who made a positive impact on our world. Garo died in 1939, and was a victim of the Great Depression, ill health and changing photographic taste. Karsh, then still a struggling photographer in Canada, was devastated to discover Garo’s studio ransacked, and many of his portraits missing. Thus began a forty-year odyssey by Karsh to discover his mentor’s portraits, and preserve them for posterity.

Drawing on meticulous research and on Karsh’s personal correspondence, Yousuf Karsh & John Garo – The Search for a Master’s Legacy brings to life this intensely human journey, and the little known story of Garo’s stellar role in the history of photography in New England. Full of breathtaking photographs (including portraits of Coolidge, Billie Burke, Winston Churchill, Nelson Mandela and other famous faces), and meaningful advice for future photographers and artists, this story illustrates how to persevere through life’s challenges, how to establish oneself as a leader in the art community, and how experiencing all life has to offer can enhance one’s ability to create meaningful art.