The Sun reported this week that Kathy Egmont, the Head of School of Lowell Community Charter Public School (located at 206 Jackson St in Lowell), resigned her position effective June 30, 2016. The school’s board of trustees reportedly accepted her resignation, issuing a statement that “We both mutually agree that it’s in the best interest of the community that we move on to new leadership.” A subsequent Sun article reported that despite the pleas of many parents and staff that Egmont be retained, the board did not change its decision. The same article speculated on the cause of the apparent rift between Egmont and the board (“issues over staff diversity”) and also interviewed former members of the board who freely shared their concerns with the reporter. (The article is well worth reading). For now, the trustees are standing firm and without comment beyond the brief statement of board chair, Doeun “Duey” Kol, quoted above.

I have no insight into the operations of Lowell Community Charter School. I’ve been to the school once, on December 13, 2013, for a memorial celebration of the life of Nelson Mandela. I’ve also seen students from the school perform or be present at various civic events around the city. All impressions I have had of the school have been positive. But I think this episode, which will be disruptive to the operation of the school and which I expect is far from over, leads me to ask some fundamental questions about charter schools.

Although this incident involves personnel management, my primary question relates to financial oversight. Who is it that oversees the expenditure of funds? Although it’s common to think of a charter school as something separate, it is definitely considered a “public school” no different in that sense than the Bailey or the Wang. Most, if not all, of the money used to operate a charter school comes from the taxes we all pay to the Commonwealth of Massachusetts, the same taxes that pay for the operation of the traditional Lowell public schools.

With those traditional public schools, I know who is responsible for spending the money. It is Connie Martin, Jackie Doherty Robert Gignac, Steve Gendron, Andy Descoteaux, Bob Hoey, and Ed Kennedy, all of whom were elected to the Lowell School Committee (Kennedy by way of the city council) by me and the other 10,000 or so residents who voted in the last city election. If I and the other voters of Lowell don’t like the way these seven are operating, we can vote them out of office in the 2017 election.

But what of a charter school? It is a public school that operates with public funds, but what say do I, as a taxpayer, have in its operation and governance? None, as far as I can tell.

I believe that ultimate authority for the governance of the Lowell Community Charter School rests with its board of trustees which is now comprised of Kol, Tyrone Mowatt, Stacie McDermott, Fru Nkimbeng, Imran Oomer, Esther Nganga, and Hung Mai. The board’s website also states “If you are interested in joining a dynamic, experienced and very diverse team committed to excellence in education, please contact, Kathy Egmont, Head of School” suggesting that it is the current trustees who select new trustees. 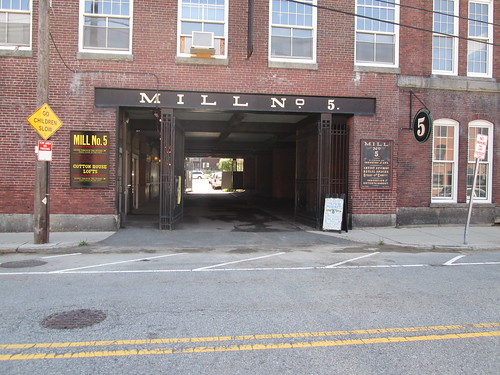 Several floors of Mill No. 5 were purchased by Lowell Community Charter School Friends Inc in June 2015

This issue of governance, especially over finances, is particularly acute for this school because just last summer it embarked on an ambitious real estate arrangement. On June 16, 2015, Lowell Community Charter School Friends, Inc., purchased three adjacent properties. The first was several floors of the mill building at 206-240 Jackson Street (the leased home of the school) for $3.7 million; the second was several floors of the mill building that houses Mill No. 5 (250-300 Jackson St) for $3.8 million; and the third were several smaller contiguous parcels on Middlesex Street (the vacant lot behind Durkin’s Carpets) for $685,000. These purchases were financed by a loan of $10,315,000 from Boston Private Bank and Trust Company which secured the loan with mortgages on all three premises. Lowell Community Charter School then entered into a lease with the Friends for the use of the premises for the school. Presumably the lease payments to the Friends are being used to pay back the loan to the Boston bank.

Mortgages of $10 million dollars are not a common occurrence in Lowell so when this transaction was recorded last summer, it was a memorable one. Back then, I was impressed with the financial scale of the undertaking but didn’t think much more of it. But this week’s controversy has left me with questions about governance and oversite of expenditures. I’m not for a moment suggesting there is anything wrong with the school or this real estate deal; I’m simply observing that under the law, this charter school is a public school funded with public taxes and asking what public oversite exists. Hopefully someone will explain it to me and those among our readers who might have the same question.

If you’re a regular reader, you know that I always watch and report on the Lowell City Council meetings (my report on the April 26, 2016 meeting, for example). The intensity of council meetings may pick up with the coming debate over the city’s FY17 budget, but lately the meetings have been brief and business-like with little drama (which, despite the lack of value as entertainment, is evidence that the city is being pretty well run). The same can’t be said for recent hearings before the Planning and Zoning boards. Who could have predicted that municipal meetings on land use would make such compelling television? The April 21 meeting of the Planning Board, for example, again took up the proposal for several hundred new apartments at 42 Wellman Street. Things got pretty tense over traffic patterns and sidewalks.

There was also mention that the board will take up at a May meeting a proposal to build a $40mil, five story building with 156 apartment units (totaling 438 beds) that is intended to house UMass Lowell college students on French Street (Merrimack Plaza), across from Lowell High School, on the site of the soon-to-move-to-Tewksbury Lowell Five operations center.

There are a number of other controversial projects underway. All of the documents related to every project under review are available for viewing on the websites of both the Planning Board and the Zoning Board of Appeals. They make for interesting reading. (Look for the “Projects currently under review can be accessed here link”).

The Globe reported yesterday that a “controversial” transgender bill was soon heading for a vote in the House and Senate, that it was likely to pass, and that a spokesperson for Governor Baker suggested that the governor would not veto the legislation if it passed the legislature.

Here’s what the bill says:

This seems completely reasonable to me. A learned doctor once told me “if you ever knew how little we understand about how the human body works, you’d be shocked.” That applies not only to bodily functions but to behavior, as well. People are different. Accept it.

The main objection to this bill seems to be that men, upon the bill’s passage, will begin dressing as women and enter the ladies room to molest little girls. This argument is designed to play upon deep seated prejudice and irrational fears. Child molesters and sexual predators are not known for their impulse control. If they are predisposed to do what is predicted, they would have already done it. No one is sitting around thinking “I can’t wait until they pass this bill so I can go into the bathroom and molest people.” No, this argument is all about the makers of the argument being uncomfortable with transsexuals and, knowing that they cannot publicly admit that, resorting to arguments that would not be out of place in Salem in 1692. This is much like what happened back in 2003 when the Supreme Judicial Court allowed same sex marriage. Those who opposed the decision predicated it would lead to bigamy and bestiality. They were wrong then, just as the opponents of this bill are wrong now. The legislature should pass this bill, the governor should sign it, and we should let everyone get on with their lives.