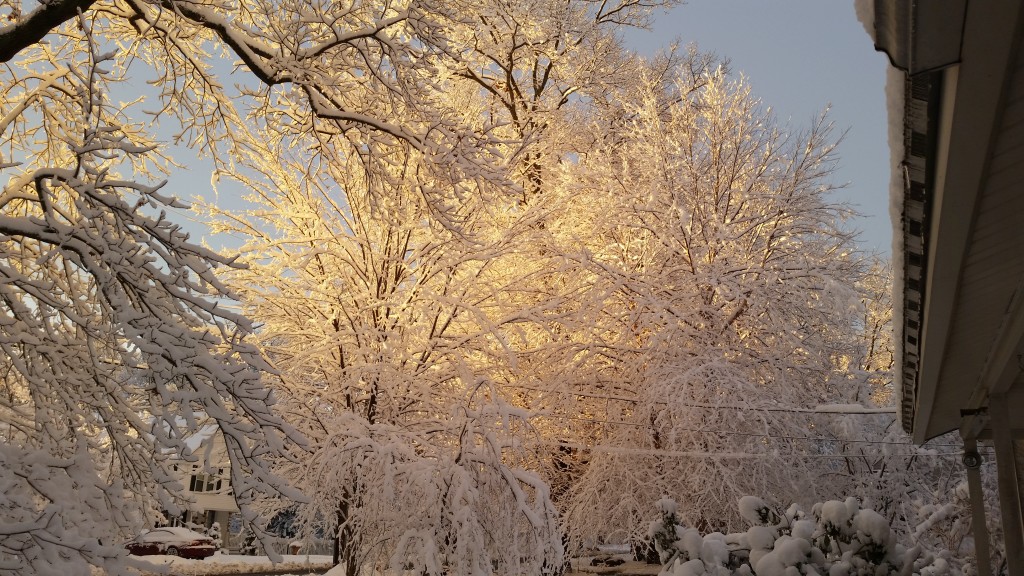 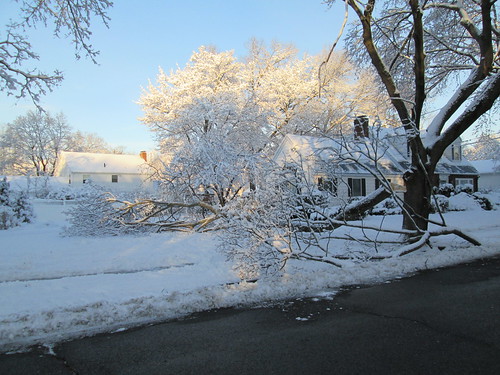 Winter Weather: The Good and the Bad

We seemed to have tolerated Friday’s snowstorm pretty well. After a week of long range forecasts predicting that the storm would miss us, by mid-day on Thursday weather-people were rapidly revising their forecasts. The rain began very early on Friday and switched to snow by 5 a.m. Schools that cancelled made the right call because the snow persisted to mid-afternoon. Those who were out at lunch time reported bad driving conditions. If you were already at work, it seemed best to stay there all day, because the weather-people called for the snow to end by about 3 p.m. Sure enough, it did. The biggest hazard for me driving home at 4:45 p.m. was the glare of the sun on the Lowell Connector outbound.

Because the snow was wet and sticky and because it was windy, any vertical object ended the day coated in white. Friday night, Instagram and Twitter were filled with great photos of a setting sun lighting up snow-coated tree branches. With temperatures in the teens overnight, the snow-coating remained as the sun rose in a clear blue sky on Saturday morning. But snow that’s wet enough to stick to a branch is also heavy enough to bring that branch down. The photo above illustrates the beauty and the danger of winter weather: The big limb in the foreground cracked off the tree while those still standing in the background are beautifully illuminated by the rising sun. (I couldn’t tell if the downed-limb in the photo was a casualty of heavy snow or if it had succumbed to heavy wind earlier in the week, however, I know of plenty of limbs that did come down in the snow, including two the fatally struck people elsewhere in Massachusetts).

Unfortunately, it looks like another storm similar to Friday’s is due to arrive tomorrow morning. Winter is far from over.

On Tuesday the city council voted to apply for a $400,000 state grant for improvements to the South Common. The money would pay for a walkway from Thorndike Street at the Gallagher Terminal, directly across the common to South Street. The new walk will be wide and sturdy, with plenty of lighting. To make that same journey now via a lit walkway, you have to follow the perimeter of the common, so this will be a great improvement.

Hopefully this project will jump-start other portions of the South Common improvement plan that have been talked about for several years. Almost five years ago, on March 29, 2011, I attended a public presentation on plans for the South Common given by the city’s Division of Planning and Development at the Pollard Memorial Library.

Here is some of what the DPD people said at that time:

The plan is to have the construction documents complete by June 30 of this year [2011]. That would allow the city to apply for a state grant of $1.5 million that, if awarded, would allow construction to begin in the spring of 2012. Since the overall improvements contemplated would cost $7 million, the work will be split into phases.

Phase I will include an extension of last summer’s renovations to the sidewalk and lighting along Thorndike Street all the way to Highland Street. It would also include the installation of a path all the way from Thorndike to South Street with appropriate lighting and the replacement of the existing 8-foot high razor wire topped chain linked fence behind the Rogers School with a more sightly barrier. This path would be laid out to accommodate the contemplated extension of the National Park’s trolley system through the Common. . .

Phase II of the project would be the renovation of the existing soccer field. This would include a walking track around the field’s perimeter and an amphitheater built into the slope along Thorndike Street across from the Gallagher Terminal with the stage area on the Thorndike Street side of the playing field. There is an ongoing investigation as to what surface – natural grass or artificial turf – would be best for the soccer field.

Phase III would include all of the “activities” such as a new playground along South Street and a new pool, either of a traditional variety or a fountain pool. The idea is to keep all the family-friendly activities grouped together in that area so that a parent would be able to supervise multiple children at the same time. There is also much consideration being given to keeping noise down at night because of the housing across South Street. Because of this, a basketball court will be located in the opposite corner of the park, closer to the Thorndike-South Street intersection (although this park will not have lights to keep it from being used late in the evening).

Hopefully this latest effort—the lighted walkway from Thorndike to South Streets—will be the kickoff of a bigger effort to make the South Common one of the best green spaces in the city.

While I commend the city for being concerned with easing the walking route of those headed east from the Gallagher Terminal with this South Common walkway, I hope we haven’t forgotten about those who head north from Gallagher. I’m speaking about those heading for downtown and the Acre, all of whom have to traverse the Lord Overpass.

Back on November 17, 2015, the city’s Planning Department hosted a public meeting on the Lord Overpass at the city’s Senior Center,

Here’s the last paragraph of the report I wrote about that meeting:

At the conclusion of the meeting, Craig Thomas of DPD said that he, his staff, and the engineers would take all of the suggestions from the group back to the office and incorporate that information into the final design of the new overpass. He said another meeting will be scheduled in January or February 2016 so that the engineers can brief the public on the final plans.

To be fair, it is only February 7 and with it being a leap year, February has 29 days, so we still might get a Lord Overpass follow-up meeting sometime this month. For all the great things going on in the city – the lighting up of the canals, recent developments in the Hamilton Canal District, to name two – there’s too little attention being paid to transportation options that don’t involve cars. Until we make walking, bicycling, and riding the bus more attractive options, we won’t find relief from car traffic.

At last week’s council meeting, Corey Belanger asked for a report on the status of the parking garage the city plans to build in the Hamilton Canal District. That report is in this week’s city council packet which is available online.

The report says the garage is expected to cost $30 million and that the initial funding for design costs of approximately $2 million is supposed to come from the proceeds of the sale of HCD lots to Genesis Healthcare and Watermark, both of which are supposed to construct buildings on those lots. Another critical element in this equation is the $4.7 million MassWorks grant brought to the city last November by Governor Baker. That’s supposed to extend Broadway and associated utilities across Dutton Street and take it deep into the Hamilton Canal District. This work includes rehabbing the existing bridge over the Merrimack Canal (i.e., the one parallel to Dutton Street) and also would include a new bridge over the Lower Pawtucket Canal. This new bridge, which is being called the “Signature” bridge, would connect Broadway with Canal Street which then cuts across Jackson Street and ends at Middlesex Street, just at the foot of the upramp to the Lord Overpass.

Clearly there are a lot of very expensive, very complicated moving parts to this project. One of those parts is where to put the tour buses visiting the National Park while their passengers are engaged in NPS activities. (The place where those buses now park is central to much of the above effort so a new home must be found for them). Last fall, after months of negotiations with the LRTA for space controlled by the transit authority on YMCA Drive, the city seemed to achieve a breakthrough, winning permission from LRTA to lease the necessary space.

However, the move from Dutton Street to YMCA Drive seemed to hit a bump with the Conservation Commission which was hesitant to give the move its stamp of approval, partly because of the presence of wetlands, but also because the board had recently required a condominium complex adjacent to the proposed bus parking site to do extensive and expensive work to meet conservation concerns. To allow the city to do a like-project without the same extensive, expensive and time-consuming tasks required of the condo association seemed to strike some of the commission members as inequitable. Rather than vote on this proposal when it was last before them, conservation commission members continued the matter to allow the city to contact the condo association and seek its assent to the city’s proposal. The city’s website indicates that this will be back before the Conservation Commission at its January 13, 2016 meeting. Hopefully everyone will have good news to report then. 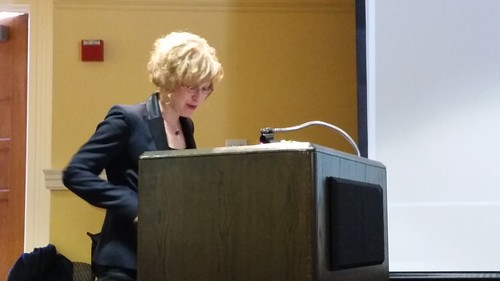 Forgotten: The Untold Story of D-Day’s Black Heroes, at Home and at War

Lowell-native Linda Hervieux, a former Lowell Sun reporter who now lives in Paris is in America for Black History month to promote her first book, Forgotten: The Untold Story of D-Day’s Black Heroes, at Home and at War. She made a stop in Lowell, doing a well-attended reading yesterday at Pollard Memorial Library. Linda, who was the Sun’s city reporter in the early 1990s, explained that she was in Normandy June 2009, covering the 65th anniversary of D-Day for another publication. At each anniversary, the French government designates a single American veteran of the day as a special honoree. In 2009, it was an African-American soldier.

Linda explained that she and the other reporters were surprised by this, since none of the books or movies they had seen about D-Day ever mentioned any African-American soldiers being there. That set her on a journalistic journey that uncovered the story of the 320th Barrage Balloon Battalion, an all-black unit that landed on Omaha Beach on June 6, 1944 to help protect the invasion force from attacks by low-flying German planes.

Linda further explained that the book is not so much a history of the battle as it is a social history of the members of the unit in Jim Crow America both before and after the war, in a U.S. Army dominated by officers from the south, and in pre-D-Day England, where they were treated as equal human beings.

I purchased a copy of the book at the event and will post a review as soon as I’m done reading it. In the meantime, check it out on Amazon where 26 reviewers have collectively given it a 5-star rating.

What’s with the “50” in the name of this year’s Super Bowl? Every previous NFL championship since Super Bowl V has been designated by a Roman numeral. I guess they didn’t like the look of Super Bowl L. As for tonight’s game, I pick the Panthers. Since I’m making predictions, on Tuesday in New Hampshire, I think Donald Trump will just barely hang on and win the Republican primary, but I also think Hillary Clinton will overtake Bernie Sanders and will win on the Democratic side.