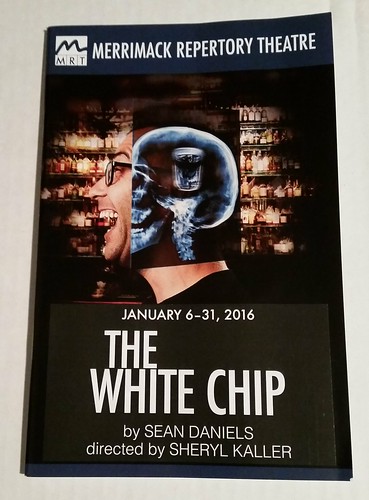 Saturday I saw “White Chip,” the current show at the Merrimack Repertory Theatre. I knew it was about addiction, that it was written by MRT Artistic Director Sean Daniels, and that it was autobiographical. As we left for the theater, it was cold, windy, and a few snowflakes were in the air. The rest of the east coast was being hammered by an historic blizzard. We were supposed to be on the fringes, but the thought of emerging from a theatre to a blanket of snow, even if only a few inches, didn’t incite much enthusiasm in me for going out.

The stage was set with a row of folding chairs facing the audience. Tables containing bottles and other props were to either side. A large white board in a wooden frame was in the background. Three actors emerged and remained on stage throughout the 90 minute performance. One played Sean throughout, the other two played a variety of roles integral to the story.

A few minutes in, I slouched in my seat thinking, This is not going to be interesting or entertaining.

I was wrong on both counts. The play is a very powerful exposition on addiction that is leavened by humor, some of it dark, but enough to bring a smile to your face or elicit a laugh often enough. However, the play is about addiction; how it can creep up on you and how terribly difficult it is to overcome. At an addict’s first Alcoholics Anonymous meeting, he is given a white poker chip to symbolize the start of his sobriety. In the play, Sean received many white chips because of his many relapses. In the end, understanding the physiology of addiction – how the drug, in his case alcohol, interacted with the natural chemicals in his brain – helped him gain and continue his sobriety.

Barely a day goes by in Lowell in 2016 when we don’t hear or read something about the tragic cost of addiction. The obituary pages carry far too many notices of 20- and 30-somethings who have died “unexpectedly” and the life-expectancy for white males in America is decreasing, due almost entirely to addiction-related deaths. We all seek ways to address this epidemic but few understand why it is an epidemic and how powerful drugs come to control the life of an addict regardless of the strength of his will. To better appreciate the realities of addiction makes “White Chip” essential viewing for anyone living in Lowell. That it is an entertaining, incredibly well-acted show, is a bonus.

“White Chip” continues at the MRT through Sunday, January 31, 2016. Tickets are still available at the MRT website.