Some items left over from last week . . .

At least some of the theaters at the Lowell Cinema (near Industrial Ave and Cross Point) have been reconfigured. The rows of lightly-padded stadium style seats have been replaced by widely-spaced, thickly padded recliners. Because there are fewer seats, you must select your’s when you buy your ticket. I discovered that a few weeks ago when we went to see Spotlight. As we bought our tickets at the entrance, the sales clerk twirled the touch screen monitor around and asked us to select our seats. I was momentarily taken aback, ready to ask, How tall is the person sitting in the row in front of this seat? I did not and found once inside the theater that I had nothing to worry about since the rows are far apart with significant height differences. Once the movie begins, it’s as if no one is in front of you.

On Saturday with The Big Short, I decided to buy my tickets online from home. After paying by credit card, I printed our tickets about an hour before the show. It seemed like we got the last two seats (that weren’t in the front row) in the theater. Arriving at the cinema which is just a 5 minute drive from my house, we by-passed the ticket purchasing line and went right to the ticket taker. As we did, a voice boomed over the loud speaker, “The Big Short and Star Wars are both sold out.” Because our seats were saved, we didn’t have to worry about choosing where to sit.

I found it pretty amazing on Christmas Day to be traveling to my various destinations in shirt sleeves due to the sunny, 60-something degree weather. It seems like December has been much warmer than normally would be the case but that all seems about to change. The most recent forecast is for 2 to 4 inches of snow for Lowell on Tuesday, beginning at about 5 am.

While walking near Boston Common yesterday, I came upon the Edgar Allan Poe statue that was erected in 2014 at the corner of Boylston and Charles Streets. The life-sized statue by Stefanie Rocknak is called “Poe Returning to Boston.” 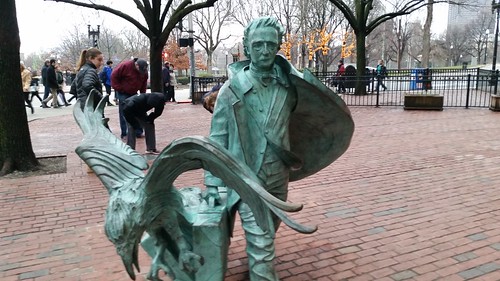 Poe made several trips to Lowell and left behind Annie Richmond who some consider to have been one of his girlfriends. She’s buried in Lowell Cemetery. It would be nice if we could find a permanent way to memorialize Poe’s visits to Lowell.

Sorry to read that former Red Sox outfielder Dave Henderson died yesterday at age 57. I’ll never forget his dramatic home run in Game 5 of the 1986 American League Championship Series against the California Angels. The Red Sox were down in the series three games to one and trailed in the ninth inning by a run. With two outs and two strikes on him, Henderson hit a two run home run off of Angel’s reliever Donnie Moore (whose life ended tragically just a few years later).

The Sox went on to win the series against the Angels but lost the World Series to the Mets. Maybe we all would have been better off had Henderson not hit that home run after all.

According to Henderson’s Wikipedia page, he died of a heart attack a month after undergoing a kidney transplant.

The Legacy of the Vietnam War

On Christmas Eve Day, the New York Times ran a very moving story about a group of Americans whose fathers were killed during the Vietnam War who travelled to that country in search of closure. In Vietnam, they met with Vietnamese whose parents had suffered the same fate. In a few cases, the Americans also traveled to sites where their never-recovered fathers were thought to have fallen.

About ten years ago I read a book called They Marched Into Sunlight by David Maraniss. The book is about the Vietnam War but is really two stories. One is about a young American man who served in the Army in Vietnam; the other about another young American man who protested the war while going to school at University of Wisconsin. The connection was that the son of one of the men and the daughter of the other had met and married. It was an excellent book. Tom Hanks is supposedly going to make it into a movie.

I’ve long thought that a similar book should be written about Lowell but instead of an American soldier and an American protester, the main characters should be working class young American men from Lowell who were drafted or enlisted and went to fight in Vietnam and Vietnamese and Cambodians who ended up in Lowell as a result of the war. Following the experience of both groups during the war and in the decades following it would yield a fascinating story about the war but also about Lowell.

So if any would-be authors out there are looking for ideas, feel free to take on this one.

Speaking of books related to Lowell, earlier this year I read Empire of Cotton: A Global History by Sven Beckert. The book mentions Lowell a few times but not as much as I would have expected. That’s because as big as Lowell was in the United States, it was only a small piece of the first global industry (according to Beckert), the growing, weaving and sale of cotton. It’s a great book so I was very happy to learn that Beckert will be coming to Lowell to talk about his book on March 1, 2016 at 7 pm to give a Moses Greeley Parker Lecture (at Lowell National Historical Park Visitor Center on Market Street).

I was also pleased a couple of weeks ago when the New York Times Book Review choose Empire of Cotton as one of the ten best books of 2015. Here’s what the Times wrote about the book:

If sugar was the defining commodity of the 18th century and oil of the 20th, then surely cotton was king in the 19th century. In this sweeping, ambitious and disturbing survey, Beckert takes us through every phase of a global industry that has relied on millions of miserably treated slaves, sharecroppers and millworkers to turn out its product. The industrialization of cotton rested on violence, Beckert tells us, and its story is that of the development of the modern world itself. Even today, he reports, an industry that is always looking for cheaper labor is engaged in a “giant race to the bottom.”

The Globe Comes to Cambodia Town

Yesterday’s Boston Globe travel section had a story about foreign food and culture close to home that featured Lowell and its Lower Highlands neighborhood (which the newspaper calls “Cambodia Town”). Highlighted in the story are several shops in Pailin Plaza, the Phnom Penh Supermarket on Chelmsford Street, and Simply Khmer on Lincoln Street which is “arguably one of the bet Cambodian restaurants in New England.

I am in no way an expert on Cambodian food, but Simply Khmer is one of my favorite restaurants in Lowell. If you’re not familiar with the Highlands, you might ask “where is Lincoln Street?” Easy. It begins at Lincoln Square which is where our Abraham Lincoln monument is located, just a short distance from the Lincoln School. If you are coming from the Lord Overpass on Chelmsford Street, turn left at the first traffic light. That’s Lincoln Street. Simply Khmer is on the left at the top of the hill in a small strip mall.