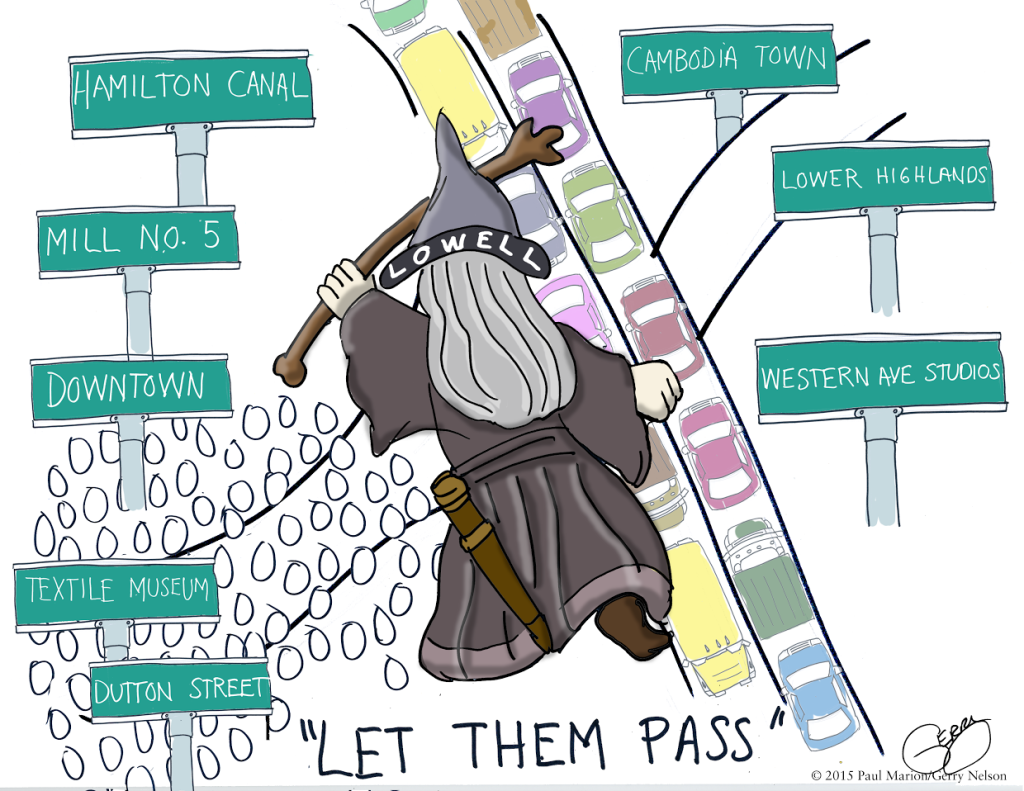 Tomorrow night at 6 pm at the Senior Center at Broadway and Fletcher, the Lowell Department of Planning and Development will hold a public meeting on the Lord Overpass renovation project. 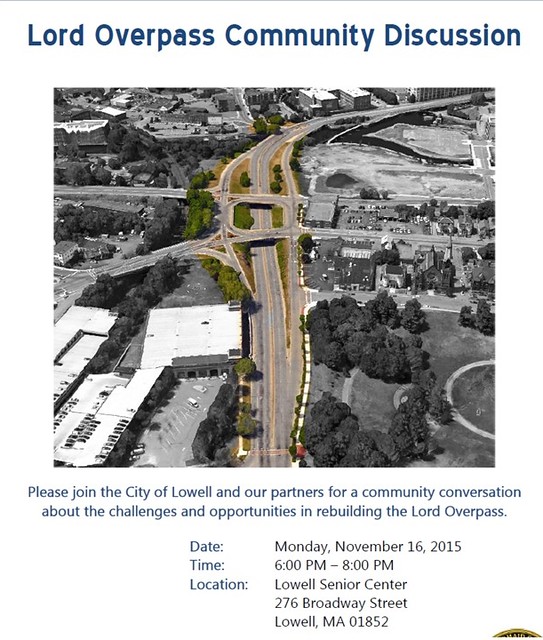 The consultants who are designing the new version of the Overpass will be on hand to hear suggestions and observations offered by members of the public. Realistically, the “new design” won’t differ much from the old design. There still will be a traffic circle elevated with long ramps stretching down to Thorndike Street which passes underneath. In fact, this project would not even be happening if the two “bridges” of the existing Overpass, the portions that cross over Thorndike, were not in serious structural disrepair (meaning the portions of which are not visible to those driving over them).

So will public input be an exercise in futility? Not necessarily because there are two aspects of the design that can be influenced. The first is how the Overpass accommodates pedestrians and bicyclists. Both were clearly an afterthought of the original designers as the 75 people who joined us on our October 31, 2015 Lord Overpass walk experienced firsthand. It’s as if the Overpass was designed exclusively for automobiles but at the last minute someone said “what if someone wants to walk through here?” and they tacked on a few sidewalks in something less than an afterthought. If enough people show up Monday night and make the case that a design more conducive to walking is highly desirable, perhaps the professionals will incorporate that thinking into their design process.

The second aspect of the project that is susceptible to public influence is the entirely new intersection of Flectcher, Thorndike, Jackson, and Dutton Streets. While that area is physically remote from the existing Lord Overpass, it is part of this project. It is also critical to the Hamilton Canal District since for HCD to succeed, people will have to get into it, both on foot and by car. This new intersection will be the gateway to the HCD and if it designed primarily to accommodate vehicles coming from the Lowell Connector at the expense of people walking to it from the Acre, the Lower Highlands, and from the train station, it will be a failure.

So please show up, tomorrow night at 6pm at the Lowell Senior Center.

There were a couple of interesting matters discussed at last Tuesday’s city council meeting. The council quietly made a procedural vote on the Lowell High School project while City Manager Murphy explained that at a meeting of the Massachusetts School Building Authority this coming Wednesday, the MSBA is supposed to move Lowell to the next level of the process, three months ahead of schedule.

Next, what seemed like a simple procedural vote to authorize Verizon to add some wireless signal transmitters to its existing telephone poles became an opportunity for councilors to express their displeasure with Verizon. At first glance, it seemed like a misdirected attack. This proposal was about improving the data coverage provided to Verizon cell phone service subscribers while the councilors were upset my Verizon’s refusal to offer its cable TV service, Fios, in Lowell. In retrospect, however, I think it was entirely appropriate for the council to take a stand on this issue. What other leverage do they have on Verizon, a company that sees a world of one way streets in which when the city asks Verizon for something, the answer is no, but when Verizon wants something from the city, the answer must be an unequivocal no. In the end, the matter was referred to the city manager for a report.

Also at Tuesday’s council meeting, Mayor Elliott filed a motion (passed unanimously) to begin discussing the process of changing the charter to increase the number of candidates needed to require a preliminary election. Councilor Belanger suggested that the requirement of 50 signatures on nomination papers to appear on the ballot should perhaps be increased. Councilor Kennedy warned that the charter change process cannot be restricted to a single aspect but could change many other things, including the current all nine city councilors elected citywide method of election. The council voted to send this motion to the city solicitor’s office for a report.

Changing the charter is a complex process that requires the support of many registered voters – that’s many of all 59,000 voters, not of the 10,000 who routinely vote in city elections. There have been previous charter changes. In the 1920s, Lowell used a ward councilor system but in 1944 changed to the current system of a city manager with nine city councilors elected at large.

At the time of the 1944 change, they city also used “proportional representation” which is the system still used in Cambridge. Voters would not only select their preferred candidates but they would number them from 1 to 9 in accordance with their preference. The proportional representation method of electing councilors was dumped in the 1950s in favor of the system still used today.

Since then, there have been several attempts to change the charter. The most serious of these was in the early 1970s when a charter commission was elected and served. I think the commission’s recommendation was to dump the city manager form of government in favor of a strong, elected mayor but the voters rejected that proposal.
In 1993, there were several non-binding referendums on the city ballot including one in favor of a strong mayor. That referendum received a majority of votes but in the same election, six of the nine city councilors were replaced. The new city council completely changed the city’s direction and that undercut the impetus to officially change the charter and nothing more was done. (I think this phenomenon has happened at other times: rising discontent among those who do vote gives rise to the most serious efforts to alter the charter, but before that can be done, that same discontent elects a new group of councilors who satisfy the desire for change sufficiently enough that everyone drops the charter change idea).

In 1999 one councilor proposed increasing the size of the council and replacing the elected school committee with an appointed one. That councilor lost his reelection effort so his colleagues, I think, took away the lesson to not try to change things.

Since then, there was an effort to institute proportional voting like they have in Cambridge and there is often talk right after elections about changing the charter. That typically fails because it requires a substantial percent of registered voters to support it, a far larger number than actually participate in local elections. Those who do participate in the local elections have out-sized influence because of the lack of participation by other residents, so they are quite content to leave the system as it is.
Because those who most benefit from the system as it is now – elected officials but also those who benefit from those elected officials and the mainstream media – are also key players in any effort to change the current system, it is unlikely to change from within. As Upton Sinclair once said, “It is difficult to get a man to understand something, when his salary depends on his not understanding it.” I suppose if the US Department of Justice wanted to pursue some action alleging structural exclusion of minority groups from city government, that might have a chance to change the system, but given the recent trends on voting rights by the US Supreme Court, I doubt anyone at the Federal level is going to be worried enough by Lowell to initiate something like that.

Chris Scott in his Column Blog reported this week that two councilors, Rodney Elliott and Ed Kennedy, each have four of the five votes needed to be elected that next mayor of Lowell. Besides his own vote, Elliott is said to have the votes of Rita Mercier, Corey Belanger, and Jim Milinazzo. Kennedy has himself, Dan Rourke, John Leahy, and Jim Leary. Councilor Bill Samaras is the only councilor who has not yet publicly made a commitment but is expected to in the coming days.

In a blog post published last night, I reviewed each Lowell mayoral election from 1966 to 2014. Some were harmonious, some were divisive. All were interesting.