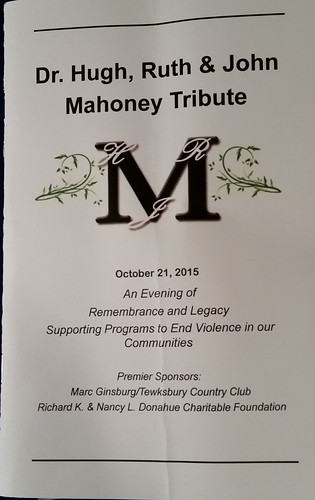 More than 200 people gathered last evening at the Tewksbury Country Club for an evening of remembrance of Dr. Hugh Mahoney, his wife Ruth, and their son John, who were murdered by burglars in their Tewksbury home on New Year’s Eve of 1975. The event was organized by the couple’s daughter, Maureen, who in very thoughtful remarks, explained that the funds raised at this event were to be used to support programs to end violence in our communities.

Those in attendance were a mixture of the Greater Lowell medical community, local law enforcement, Tewksbury residents, and many other people around the region and the country who were somehow touched by the Mahoney family. The keynote speaker was Ed Davis, the former Lowell Police Superintendent and Boston Police Commissioner, who was a college student working as a security guard at St. John’s Hospital the night this all happened. He described that evening and the diligent work of the Tewksbury Police Department in tracking down and arresting the perpetrators, a task that took two years.

Last night’s award recipients were the Center for Hope and Healing, The Michael Christensen Family Support Center, the United Teen Equality Center, and the Tewksbury Police Department. Maureen Mahoney singled out the support of Marc Ginsburg and his Tewksbury Country Club, and of the Richard K. and Nancy L. Donahue Charitable Foundation, in making the evening such a success. Anyone wishing to make a donation to the Mahoney Tribute Fund may do so through the Greater Lowell Community Foundation.