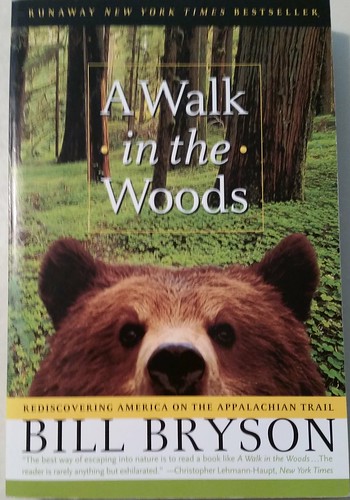 About 15 years ago we departed Lowell for a week-long family hiking trip to Arcadia State Park in Maine and helped the long drive pass more quickly by listening to a book on tape. Our selection was perfect for the occasion: A Walk in the Woods, a 1998 best-seller by Bill Bryson about his attempt as an out-of-shape, overweight 44-year old to walk the 2200 mile Appalachian Trail.  The book (which I later read in print) was hilarious and poignant, especially when read by the author himself.

Ten years ago, word filtered out of Hollywood that Robert Redford had obtained the rights to make a movie version of the book. A decade later, the movie finally made its debut. Yesterday, we made the five-minute drive to the Lowell Cinema to see it.

The movie version of A Walk in the Woods is an amusing, thought-provoking film made better by gorgeous scenery and effortless acting by a cohort of Academy Award winners. With the 79-year old Redford in the starring role, the premise of the movie was changed slightly from the book’s middle-aged Bryson seeking to overcome his writer’s block by getting back to nature to the retirement-aged Redford confronting the aging process amidst the trivialities of 21st century life. He enlists his long-absent college pal, Nick Nolte, to join him on the walk despite the protestations of his loving wife, played by Emma Thompson.

In her New York Times review of the film, Manohla Dargis wrote “it is unexpectedly moving and occasionally delightful to spend time with these titans of cinema as they walk and sometimes wobble, delivering words that become meaningful because they’re lucky enough to be spoken by Mr. Redford and Mr. Nolte.”

If you’re of the age of eligibility of AARP membership (which is 50), I’d urge you to go see A Walk in the Woods. Not only will you be touched by the issues of aging and mortality raised in the movie, but you will delight in the cinematic nostalgia of seeing some actors with incredible portfolios of past work making this movie a lot better by the presence in it.