Yesterday morning I joined nearly 40 others at the Boott Cotton Mills Museum courtyard for a Ranger-led walk to the Pawtucket Gatehouse at the O’Donnell Bridge on School Street. Our path was along the Riverwalk and the Northern Canal Walkway.

The Riverwalk portion took as behind the Tsongas Center, the new condominiums at the Lawrence Mills site, Lelacheur Park, and all the UMass Lowell East Campus Dormitories. Alongside Fox Hall, the high rise dormitory on Pawtucket Street, we circled under the rusty old bridge that carries the end of Pawtucket Street down to Aiken and passed through the sometimes-locked gates and onto the Northern Canal Walkway. 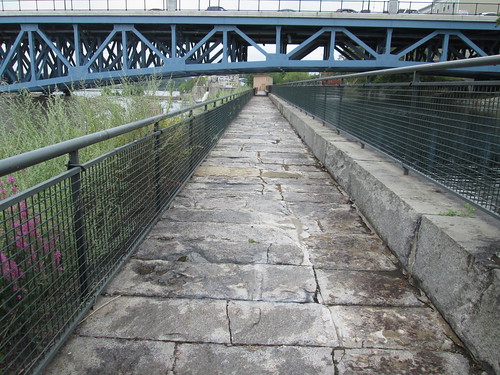 I had never before been on the Northern Canal Walkway so this was a real treat for me, especially because the early portions of it pass underneath the Richard P. Howe Bridge. The walkway itself sits atop a granite dike that separates the Northern Canal from the Merrimack River so the views on both sides are spectacular. At times, the footing is cement, then granite blocks, and as you get closer to School Street, a dirt path.

At School Street, behind the Franco-American School, you follow a ramp up to the sidewalk, cross the street, and pass through another gate onto the walkways that encircle the Pawtucket Gatehouse. Rangers had opened up the dimply lit Gatehouse and talked about its history and uses, both past and present, but the real treat was the close-up views of the Pawtucket Dam that this perch provided. Knowing that the historic iron and wood dam will soon disappear made this experience particularly poignant. (In case you missed it, Enel Corporation, which owns, among other things, the hydro power plant on the Northern Canal, has obtained permission over the objections of the National Park Service to replace the historic dam with an inflatable rubber bladder dam).

This was a great event that exposed many of us to places in Lowell we had never seen or experienced before. Thanks to Lowell National Historical Park for organizing and executing the walk. I’ll try to be more attentive to these kind of unique opportunities offered by the Park and will bring them to attention of readers as much as possible. 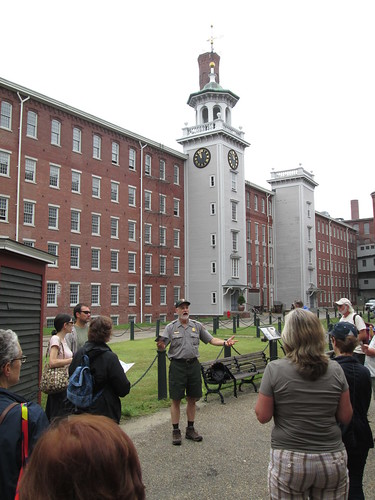 Speaking of Lowell National Historical Park, tomorrow (Tuesday) kicks off the start of a year-long celebration of the 100th birthday of the National Park Service. All park offerings are free of charge, so if you’re downtown during the day tomorrow, drop in to the Boott Cotton Mill and take a quick (or a leisurely, if your schedule permits) stroll through the museum. The NPS, as part of its anniversary celebration, asks everyone to post pictures of their National Park on social media with the tag #findyourpark (that’s “Find Your Park) so don’t let Lowell be shut out of the national photostream.

The arts were also much in evidence this weekend on Saturday morning’s Lowell Walk. Led by Jim Dyment, the Executive Director of the Brush Art Gallery, the 86 people on the tour visited museums, galleries, and even Lowell City Hall which with all of its artwork architectural beauty, and stunning political stories, will be the scene of a future Lowell Walk all by itself. 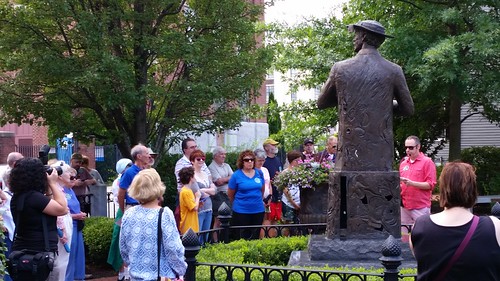 Lowell Walks has been a great success with an average attendance of 94 people on each walk. The bigger success to me has been how the walks have opened the eyes of all of us who have participated in them in all there is to see and do in Lowell. That sentiment was summed up perfectly over the weekend by a comment my co-blogger, Paul Marion, posted in response to some (typically) fantastic photos of the Art Walk posted on Facebook by Jennifer Myers. Here’s what Paul wrote:

These photographs make an extraordinary record of the vitality in the visual arts, just talking visual arts now, in a compact area of the downtown. Lowell wasn’t always like this, but now the place is brimming over with visual art. And Jim Dyment didn’t have time to go to all the galleries, studios, restaurants/cafes/shops with art displays, etc. And then there’s the $1 million Lowell Public Art Collection and other outdoor sculptural works, statues, and monuments. On top of which is the remarkable preserved 19th century architecture, another form of visual art and design. This is a big package now. Needs more and more attention.

Three Lowell Walks remain with the next one coming on this Saturday, August 29, 2015. The topic is Lowell Monuments and it will be led by me. The focus will be all of the monuments and statues in the vicinity of City Hall. The walk begins at 10 am from the National Park Visitor Center on Market Street. I hope you can join us.

One Response to A Weekend for Discovering Lowell