At noon today, I set off from the Superior Courthouse in search of lunch. Walking down Gorham Street with the midday heat and humidity enveloping me, the thought of a strawberry-lemonade and a BLT from Café UTEC popped into my head. I cut through the Central Plaza parking lot and easily crossed Church Street at the auto parts store. Soon the Lowell District Court was to my left and the old St. Paul’s Methodist Church, the modern home of UTEC, was only yards away. From a distance, I spotted several white papers taped to the Café door. Not a good omen. The papers, handmade signs, explained “Café UTEC closed today due to water problem.” 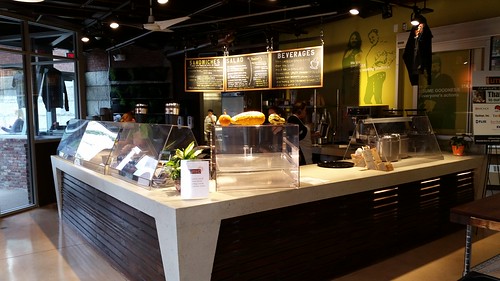 Plumbing problems kept me out of Cafe UTEC today

Foiled by a broken pipe. Too bad, because Café UTEC’s BLT and its grilled cheese are two of my favorite downtown sandwiches. (I was a more adventurous diner in my younger days but there are still plenty of dining options in downtown). I remembered one of my downtown-dwelling Facebook friends inquiring over the weekend if the new ramen noodle shop on Merrimack Street had opened yet. Since my exposure to ramen noodles has only consisted of peeling back lids from Styrofoam containers and adding hot water, I figured I should try the real thing.

Up Warren Street from UTEC to Central and down Central to the infamous Market/Central/Prescott Street intersection. I say “infamous” because the white pedestrian crossing light coincides with the green “go” light for cars turning onto Prescott which just makes it inevitable that someone gets run over. I didn’t, and continued on my way.

On Merrimack Street, I turned the corner at Edible Arrangements and headed towards City Hall. As I walked by, a guy relaxing on a bench facing the street noticed me and quickly swiveled his head and gently said, “Excuse me, but could you spare a dollar?” Since I was walking faster than he was talking, I didn’t have to respond. If all panhandlers in downtown Lowell were as mellow as this guy, no one would be complaining about it. 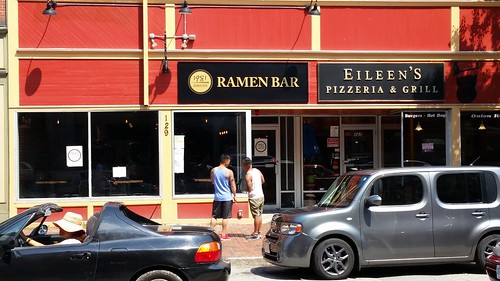 Nearing my objective, I noticed building permits in the windows of the former Mambo Grill, now bearing a sign for “1981 Ramen Bar.” It was not yet open for business. The adjacent sign for “Elieen’s Pizzeria & Grill” beckoned but it was too hot for anything hot so instead I slipped into Jimmy John’s, the (relatively) new sandwich shop on the south side of Merrimack Street. I’d eaten there once before, after a Saturday morning Lowell Walks so I knew what to expect: an upscale Subway with a decent sandwich, quickly prepared by a well-trained, anxious to wait-on-you crew of employees. I got a small Italian sub and a coke which I enjoyed in the coolness of the restaurant while watching the world pass by on Merrimack Street. 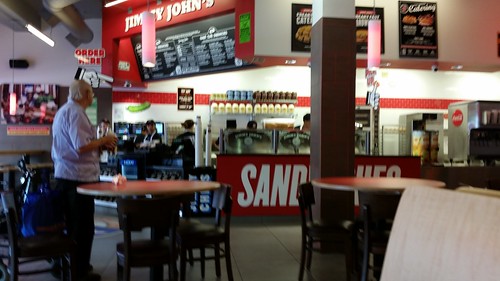 Done with lunch, I headed back to work via Palmer Street. No one was seated outdoors at either TreMonte or Fuse Bistro, more of a comment of the stickiness of the weather than the business of those two fine eating establishments. On to Market, I used the sidewalk bump outs and cross walk in front of Brewed Awakening to get to the other side. That’s my preferred crossing point since it’s easier to get to the other side there than it is at the intersection with Central. There, turning cars pose a threat even when you have the white pedestrian light in your favor. 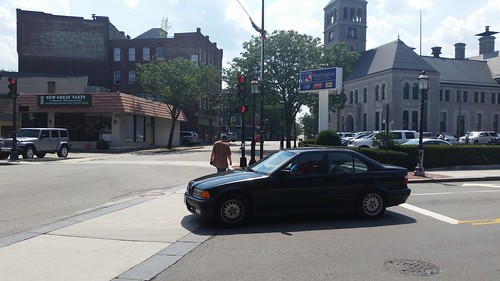 Middlesex and Central: If the light never turns white, is it still jaywalking?

Although the white light at Market and Central is no guarantee of safety, at least the white light works. That’s still not the case at Central and Middlesex. It was months ago that I first wrote about that pedestrian light not working. It still isn’t. So as not to make a hasty judgment on that, today I pressed the crossing button aside the traffic light pole and waited for my white signal to cross. And waited. And waited. After two full light cycles I had regretted not applying sunscreen prior to setting out since I was catching it in full while standing in front of what used to by Martyn’s Jewelers. With the Washington Savings Bank illuminated sign broadcasting a temperature of 93 degrees, I finally joined my more determined pedestrian colleagues and scooted across the intersection during a gap in the traffic.

The last crossing would be of Gorham Street. I try to avoid crossing in front of Santoro’s. There is a pedestrian light you can activate there. It turns white pretty quickly. But vehicles coming down Gorham from the courthouse think they’re still on the Connector. That mindset plus gravity cause them to move pretty fast with no clue that the blinking yellow light may suddenly turn solid red. Any time I’ve ever crossed there, I’ve never seen fewer than two oncoming cars speed through the red light so I always wait to step into the street. So while it is safe to cross there if you pause, I always do so with the expectation that there will be a dramatic rear end collision back in the pack because not everyone notices either the red stop light or the red brake lights on the line of stationary cars.

Up the hill at the new Coalition for a Better Acre apartment building, there’s a painted crosswalk at Gorham and Hobson at the corner of the courthouse property. I would cross there. I stood on one side in the cross walk, and some engineer guy in a yellow vest with a video camera stood on the opposite side of the street in the crosswalk. After about a minute, an SUV coming out of the city stopped. I started across. Two or three inbound cars slipped past but finally someone else stopped. Me and the guy in the vest hurriedly passed in the middle of the street. As I turned up the sidewalk towards the courthouse entrance, I glanced over at the SUV that had first stopped. Its license plates were from Connecticut.

2 Responses to A Steamy Stroll in Downtown Lowell