Last night I took a walk to Cupples Square, the vibrant business hub of the Highlands, where a road construction project recently commenced.

First some background: Cupples Square is mostly along Westford Street in the Highlands neighborhood.  Coming from downtown, once your cross the intersection with School Street you reach it.  As you pass through it, Pine Street angles off to the left, heading towards the Morey School while Westford Street continues straight heading towards Drum Hill.  (Pine and Westford rejoin just beyond Tyler Park).  The Square gained its name in the earl 1920s when it became a memorial to Lt. Lorne Cupples, an Army officer who was killed in action in France during World War One.  When I was growing up on Wilder Street, Cupples Square was the primary shopping area of the neighborhood.  While the names on the stores and the products offered for sale may have changed, the Square remains a vibrant neighborhood business center.

Here’s how the city has described this new project:

This is an informational notice for the City of Lowell. Paving and sidewalk reconstruction will begin on Westford Street in the next few days. During this project, the intersection with Pine Street, in Cupples Square, will be realigned. Pine Street will be changing to one way with traffic flowing into the square. The entire project will take several months. Please use caution when driving through this area.

Below are two photos taken last night.  The first one is taken on Pine Street looking towards Cupples Square.  The plan calls for the traffic to be one way in this direction.  So if you’re driving from the Upper Highlands towards downtown, you’ll be able to take Pine Street.  If you’re coming the other way, you’ll have to seek an alternate route.  As the traffic flows into the Square, the merge will no longer be a reverse-V.  Instead, Pine Street will curl to the left so that there’s a right angle intersection with Westford Street. 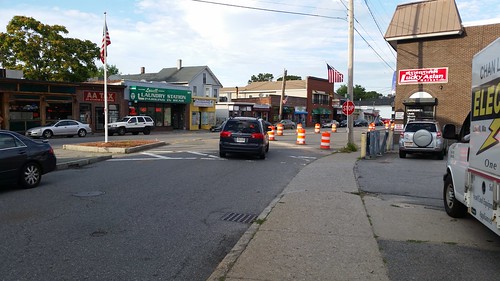 The second photo is taken from the point at which Pine and Westford separate (right in front of what I remember as Page’s Drug Store).  The photo looks down Westford Street towards downtown.  One question I have is what will become of the area enclosed by the barrels to the right of the photo.  Will it be a pedestrian bump-out to make it easier and safer for pedestrians to get across (while also beautifying the area)?  Or will it be on-street parking.  One thing seems pretty clear is that cars will not be able to drive straight through it to merge onto Westford Street. 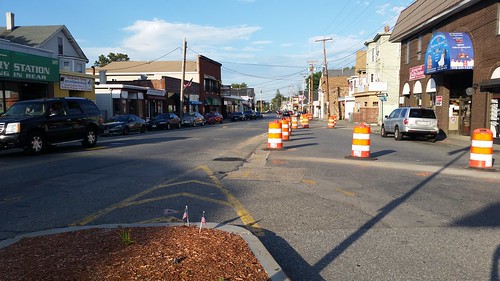