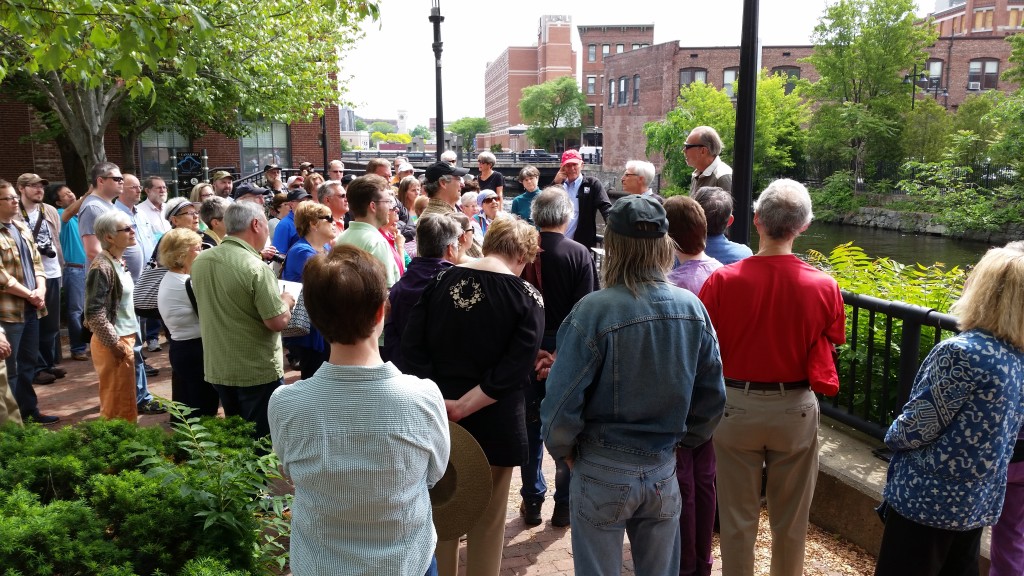 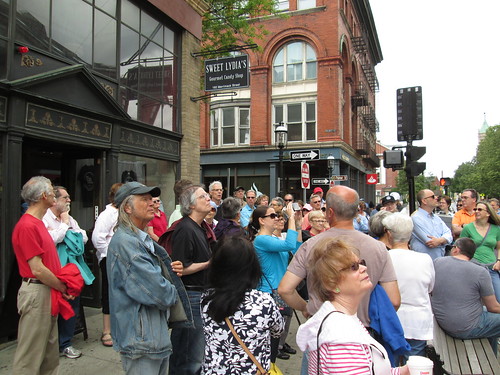 Lowell Walks kicked off yesterday morning with 81 people gathering at the National Park Visitor Center to be led around downtown by Fred Faust on the Preservation Success Stories tour.  Faust, who is the President of The Edge Group, a real estate consulting firm, and was an assistant to US Senator Paul Tsongas back when the National Park came into existence, fascinated the group with behind the scenes stories of that period of Lowell’s political history.  Stops on the tour included the Mill Girl Statue at Market Mills, the Old Police Station (aka the Market Building) on Market Street, the Pawtucket Canal behind Market Street, the Old Fire House at Palmer and Middle Street (which we all got to see from the inside thanks to Joe McNamee), the Bon Marche, and Old City Hall (the Enterprise Bank Building). 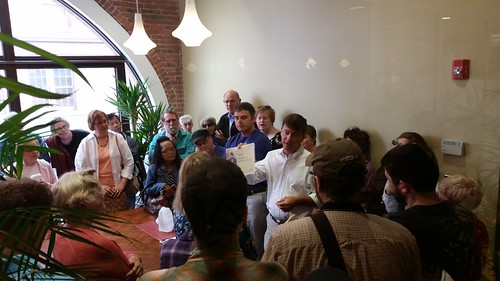 By any measure yesterday’s tour was a great success.  Hopefully the crowd will be equally large next Saturday when Paul Marion and Rosemary Noon lead a visit to the public sculptures that are positioned around downtown.  That tour, like all the others, begins at 10am at the National Park Visitor Center at 246 Market Street.  The full tour schedule is located here.

Now on the every-other-week meeting schedule of the summer, the Council has a longer than normal agenda for this coming Tuesday.  There are many important items that I’ll write about after the meeting but two that I’d like to mention here.

First is the deal by which the city would gain ownership of 8 bridges currently the property of Enel, the Italian power company that prevailed in the dispute over replacing the historic granite dam at Pawtucket Falls with an inflatable bladder dam.  I wrote about the background of Enel, Lowell and the canals last week.  A reader writing under the pseudonym Hans Hammermill left a thoughtful comment arguing that the city could negotiate a better deal.  Based on prior meetings and comments, I assume the council will unanimously support this proposal on Tuesday night.

Another vote on Tuesday is unlikely to be unanimous and that’s the proposal to withdraw the Lowell Fire Chief’s position from Civil Service.  This arose as an issue when four senior LFD officers signed up to take the Civil Service fire chief’s exam but only one actually showed up for the test which appeared to make that applicant the next fire chief by default.  That prompted City Manager Murphy to propose removing the Fire Chief’s position from Civil Service, just as had been done a number of years ago with the Police Chief position.

This is a tough vote.  I – and I think a majority of councilors – have much confidence that City Manager Murphy would make a good selection, but Murphy is not always going to be the City Manager so that same level of confidence might not always exist.  On the other hand, to quote former Patriot’s coach, Bill Parcells, “if you want me to cook the dinner, you have to let me buy the groceries.”  The smooth operation of the fire department is critical to public safety but there are limits to what the city is willing to spend on fire protection.  Through the summer, two fire vehicles per shift will be taken out of service due to high overtime costs through the year.  Some maintain that this creates an unacceptable risk while others take the position that the city cannot afford to pay more.  This is a tricky balancing act so in the end, I think it might be best for the City Manager to have greater say in selecting the fire chief who is the person most responsible for ensuring that the right balance can be attained.

Back on April 30, 2015, the city held a “tax lien auction” in which a large bundle of the city’s “tax takings” were sold to a private company called Tallage Lincoln LLC.  Here’s how this works: When you don’t pay your property taxes on time, the city has an automatic lien on your property with interest and fees accumulating over time.  At some point, the city may “take” the property for unpaid taxes by recording an Instrument of Taking at the registry of deeds.  Technically, this shifts ownership of the property to the city from the homeowner but the system is designed to get you to pay your taxes, not to have the city become a big landowner, so the city’s title is “defeasible” which means all you (or someone on your behalf) has to do is pay the back taxes along with accumulated interest and fees and you “redeem” the property, meaning you resume your ownership.

There is a mechanism by which the city can cut off your right to redeem the property.  That involves filing a complaint to foreclose this right of redemption in Land Court.  Historically, it has been rare for the city to take this step since it is time consuming and expensive.  Usually, the city just sits on the “taking” and treats it like a lien by waiting for the homeowner to sell or refinance the property at which time the city gets the amounts owed.

Several years ago the city adopted a more aggressive posture on these cases by offering for sale big bundles of its tax takings at public auctions.  The high bidder at such an auction is “assigned” the city’s position and may file the Land Court complaint to foreclose the property owner’s right to redeem.  The most recent auction is the one that occurred on April 30 of this year.  Tallage paid the city a sum of money to purchase the city’s position.  The city benefits by getting cash up front while Tallage has a business model built around the aggressive pursuit of foreclosures of these tax liens.  As the language of the Land Court puts it, “It is adjudged and ordered that all rights of redemption are forever foreclosed and barred.”

Leaving for work the other day I noticed a solar company installing some panels on a neighbor’s rooftop, something that seems increasingly popular in my part of the city (the Highlands).  At the registry of deeds, I’ve noticed a real uptick in the number of recordings related to these rooftop solar units.  Typically the solar company will record a financing statement under the Uniform Commercial Code.  Whether that constitutes a “lien” on the property in the classic sense is open to debate, but it clearly preserves a security interest in the panels for the solar company.  While looking through one of these filings I noticed something worth mentioning.  Most of these agreements are for a term of 20 years, meaning the homeowner agrees to buy (cheap) electricity from the solar company for that long.  At the end of the 20 years, the homeowner may extend the term of the agreement, negotiate the purchase of the equipment, or have it removed.  But if the homeowner decides to sell the house within that 20 year period, the new homeowner is offered an agreement with the solar company.  If that new owner doesn’t want to enter into such an agreement, the original owner must pay the solar company each year for the remaining term of the agreement a sum equal to the profit the company would have made by selling the electricity to the customer.

I think alternative energy sources including solar are great, but real estate law is complex with many unforeseen consequences so before you enter into a 20 year agreement involving something that’s going up on your roof, it would probably be wisest to hire a lawyer to take a look at the document.  It might save you some headaches in the long run.