Congratulations to yesterday’s groundbreaking by Middlesex Community College of the Boston & Maine Railroad Depot restoration project.  I was not able to attend so MCC’s Pat Cook kindly sent some observations about the project and the event, along with some superb photos by Kevin Harkins.  The following is by Pat Cook:

More than 150 community members turned out on Monday for a long-awaited groundbreaking at the historic Boston and Maine railroad depot at 240 Central St., as Middlesex Community College embarks on what is expected to be an 18-month construction project to convert the abandoned property into the college’s new academic and performing arts center. 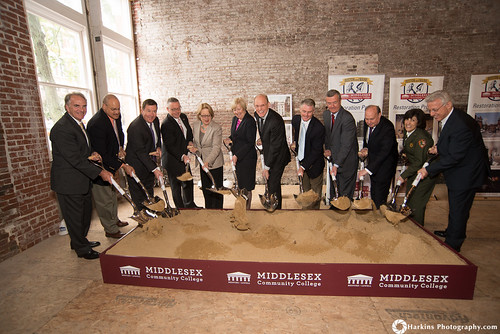 The building was built in 1876, but was abandoned decades ago before the Lowell National Historical Park stepped in, along with the Lowell Historic Preservation Commission, to help restore and preserve the property.  Middlesex took the property over in 2008, and, with the help of an $11 million boost from the state higher education capital bond bill championed by the city’s State House delegation,  and some federal study money, began the lengthy study and design of the building.  Now, the college, which has come up with another $8 million to cover construction costs, is ready to begin the construction phase, which is sure to bring a buzz of activity to that end of the city’s JAM plan.  The building serves as a gateway into the downtown, sitting atop the entrance to Central Street.

On Monday, the college tapped its new neighbors – Elliott’s Hot Dogs and Espresso’s Pizza – for the lunch menu at the packed event.  Community members took tours of the property, and more than two dozen members of MCC’s theater department reprised their stage roles from some of their performances, including Batboy, Sweeney Todd, and Shakespeare’s Scottish Play (the real name  of which can’t be used in the building because of theatrical superstition.)

The first floor and basement of the new building will house a new performing arts theater, as well as classrooms.  The second floor will be home to dance and music performance spaces and classrooms.  Design of the new egg-shaped theater was done by Leers-Weinzapfel, who also designed Harvard’s Hasty Pudding theater.  Construction on the building will be performed by Consigli Construction. 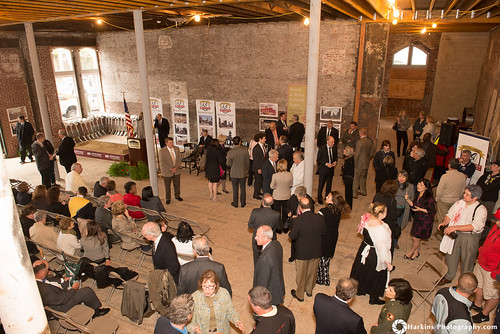 The building was built in 1876-1877.  Designed in the high Victorian Gothic style, the building served as the Boston and Maine Railroad’s Central Street depot for the city of Lowell until 1895 when a new station was constructed nearby.  It originally encompassed more than an acre of land.  The depot consisted of a two-story brick head-house with a clock tower at the south end of the facade.  Originally, the building played home to offices and other depot uses.  Historic photographs indicate that express companies, printing offices, a tailor shop and the Western Union telegraph company leased space at the depot during the 1800s.

Looking forward to seeing what the building will look like on the other side of the construction project.