This past Wednesday I drove to Springfield to speak to the Real Estate section of the Hamden County Bar Association about technology and the registry of deeds.  While the 40+ lawyers listened politely, the topic that created a buzz was the future Springfield casino.  They pointed out to me the boundaries of the 15-acre parcel secured by MGM by purchasing individual buildings and lots, all with private money and no eminent domain takings.  This parcel is right in the middle of the city.  It would be as if you took everything bounded by Merrimack, Central, Market and Dutton Streets in Lowell and just bulldozed it all and started from scratch.  There were some architecturally impressive buildings within this zone.  A few, I understand, will have their facades preserved and attached to the walls of the new casino.  The lawyers seemed mostly ambivalent about the project with most saying “we’ll see” when I asked what they thought of it.  One did say that he was looking forward to having more people walking the streets of downtown Springfield.  That way, he added, instead of every third person asking you for money, it would be every tenth or twentieth person.  So in that way, Springfield and Lowell have something in common.

There’s another thing that Springfield and Lowell have in common and that’s large, multi-acre development sites in their downtowns.  Springfield has the casino; Lowell has the Hamilton Canal District.  The Hamilton District was in the news this week with Trinity Financial Group officially withdrawing as the prime developer of the space and then Lieutenant Governor Karyn Polito and Secretary of Administration and Finance Jay Ash both visiting the Hamilton site on Friday.

It’s probably about time that Trinity and Lowell parted ways.  For years I gave Trinity the benefit of the doubt, arguing that the Great Recession was such a monumental and unexpected obstacle that it was understandable that the project timeline had slid.  But by most measures, the economy began moving forward again a couple of years ago and still not much was happening at the Hamilton site.  Then a few months ago I read an interview with Jim Keefe, the top person for Trinity.  What I remember most about that interview was Keefe repeatedly being quoted as longing for the days of Bernie Lynch as City Manager.  Whatever your opinion of Lynch’s tenure as City Manager might be – and mine is that he did a good job – he was no longer the City Manager and he’s not ever going to be the City Manager of Lowell again.  To me, the politically astute Keefe was sending a none-too-subtle message that he wasn’t going to work with the Murphy Administration.  So like a bad marriage, it’s best to end it and get on with life.

Whoever the new developer is, I hope it’s someone who honestly shares the strategic vision for the site that the city with much citizen input developed many years ago.  Circumstances change and so plans have to change too, but the existing plan should not simply be tossed on the trash heap by the new developer.  The worst thing that could happen is to just infill the entire district with whatever opportunities present themselves without a coherent, shared vision of what the final result will be.  Hopefully once there is a new master developer selected, the city will schedule one or more public meetings so that the developer can acquaint residents with its strategy and residents can acquaint the developer with their expectations. 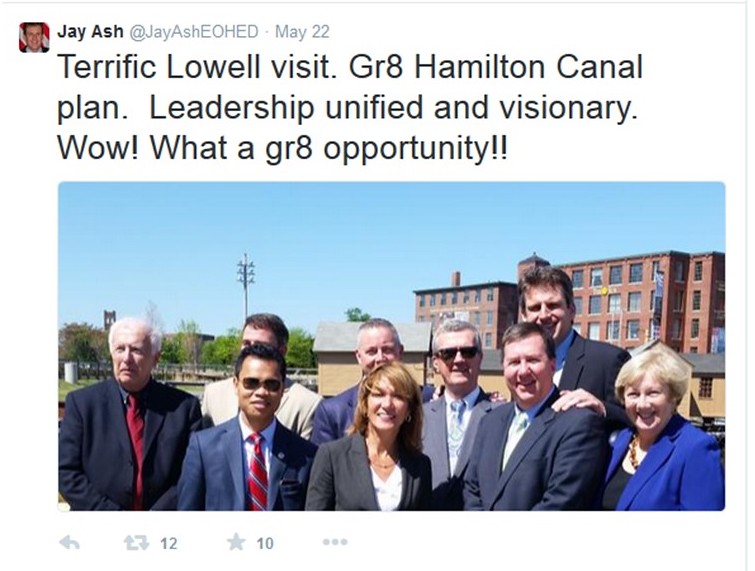 It was good that the Lt Governor and the Secretary of Administration and Finance were in the city this week to talk about the Hamilton Canal District.  The $5 million grant for roads and bridges within the district is an important pre-condition to a lot of other things getting done.

I may have missed it, but I didn’t catch any mention of the new courthouse during this visit.  That’s a $200 million dollar project that is supposed to anchor the southern end of the Hamilton Canal District.  The plans for the building are done so it’s unclear why a ground-breaking ceremony has yet to be scheduled.  There are plenty of courthouses in the Commonwealth that are in worse shape than those in Lowell, but the new courthouse could be the type of catalyst that could really get the rest of the development of the Hamilton Canal District moving.  Hopefully we’ll hear something about it soon.

Tuesday night the City Council Transportation Subcommittee heard from Jim Scanlon, the Executive Director of the Lowell Regional Transit Authority.  I did a full report on the subcommittee meeting if you missed it.  There was a lot of good, practical information shared about factors that affect bus routes and bus types.  Scanlon emphasized that the LRTA hasn’t had a fare increase since 2002 when an adult ride was made $1.  He also said that by the end of the summer, the LRTA should have a smart phone app that tells riders how long it will be until the next bus arrives at their stop. He did say that he would like the LRTA to work closer with UMass Lowell.  That certainly would be a way to increase ridership during the day and to also help draw more college students into downtown.

The council meeting had some interesting discussions so read my report on that if you missed it.  City Manager Murphy formally presented his FY6 budget to the councilors.  They will hold a public hearing on it during the first week in June.  One thing that came up at the meeting that may seem pretty minor caught my attention and that’s a proposed reorganization of the Health Department and a variety of other city offices into a Division of Health and Human Services.  The reason this is being proposed now is that the current director of the Health Department, Frank Singleton, is retiring and before a new person is hired, Manager Murphy is proposing a reorganization.  Whether or not the council goes along with it will have an impact on the qualifications sought in Singleton’s replacement.  Here’s what I wrote about the discussion of this proposal on Tuesday night:

Ordinance to create a Division of Health and Human Services.  This will take advantage of the retirement of Frank Singleton to reorganize a number of departments.  Besides the Health Department, this would include the Recreation Department, the Library, the Council on Aging, and the Veterans Office, all under the supervision of the Health Department Director.  Doing this now will allow us to hire someone for this position now.  Anticipates that this will be a budget neutral move that won’t cost any additional money than is now being spent.

The Health Department is one of those parts of city government that are easy to take for granted until a crisis arrives.  Well there is a public health crisis in the city and that’s the opioid epidemic, so the more attention given to this issue the better.

I went downtown yesterday afternoon to do some shopping and had no trouble finding a curbside parking space which is the complete opposite of what it’s been like on Saturdays for many years.  Now that the city has begun enforcing the parking ordinance on Saturdays – which happened earlier this month – downtown residents who already had parking spaces in the garages, aren’t taking up curbside spots all day on Saturday so those spaces are available to shoppers, diners and other short-term visitors to downtown.  Now we just have to get more of them.

The ArtUp Launch Party is Wednesday from 5:30 pm until 7:00 pm at the Lowell Community Health Center at 161 Jackson Street.  ArtUp is a collaborative effort that has made 249 works by local artists available for people to purchase and then donate for display at the Lowell Community Health Center.  It benefits the artists and it benefits the Health Center (which gets the art and half the purchase price).  If you can’t make it Wednesday night, at least visit the ArtUp website.

Thursday night at 6 pm, Steve O’Connor will be reading from this new book, The Witch at Rivermouth, at the Pollard Memorial Library.

Also on Thursday night from 6:30 to 8:00 pm will be the first Lowell High Showcase at Boarding House Park.  At this event, talented high school students will sing, dance, march, recite poetry and impress all in attendance with their creativity and energy.

Yesterday I wrapped up the spring walking tours of Lowell Cemetery.  Last Friday 80 people joined the tour; last Saturday there were 90; this Friday there were 65; and this Saturday there were 85.  That’s a lot of people who are interested in history and walking.  That was one of the motives in the creation of the new Downtown Lowell Walking Tour Series which launches on Saturday, June 6.  Each of the tours begin at the National Park Visitor Center at 10 am and last 90 minutes.  Each Saturday will feature a different tour guide and a different topic.  Our hope is that when people finish the tour at 11:30 am, they will stay downtown for a while to shop and eat lunch.  A full description of each tour is available on our “Top Stories” section up above (and will soon be added to our Community Calendar to the left) and the National Park has also posted the full schedule on its website.  Please set aside a few Saturday mornings during the summer to partake in one or more of these walks.