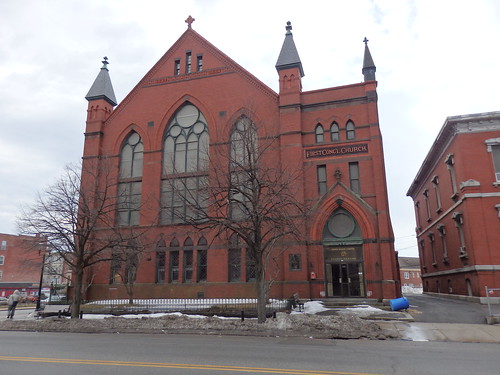 On Tuesday night more than 80 people gathered at the Lowell Senior Center for a community meeting to discuss the future of the Smith Baker Center.  The meeting was organized by the Coalition for a Better Acre and the public forum was facilitated by UMass Lowell’s John Wooding. 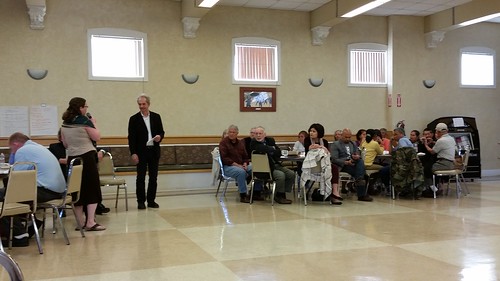 Yun-Ju Choi, the Executive Director of CBA explained that the city of Lowell has issued a Request for Proposals for the Smith Baker Center with a response deadline of June 10, 2015.  CBA is interested in submitting a proposal with a general idea of retaining the large second floor auditorium as a performance space that could also be used for community meetings, movie screenings and other similar events.  In the CBA’s concept, the first floor would be used to help fulfill the CBA’s mission of helping people become self-sufficient.  Ms. Choi also mentioned that she would like to brand the space with the name of Jack Kerouac for a number of reasons including the importance of Lowell embracing one of the city’s most famous people and because of the enhanced national and international fund raising opportunities inherent in anything related to Jack Kerouac.  She added that she has had preliminary discussions with representatives of the Kerouac estate regarding this possibility. 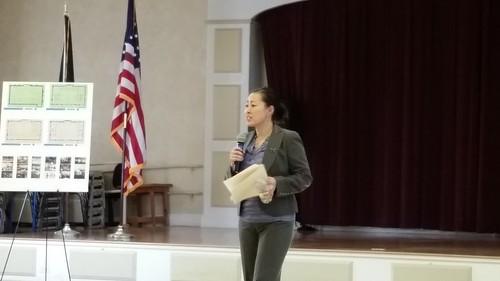 The purpose of Thursday night’s meeting was to hear ideas about preferred uses of the Smith Baker Center from members of the public.  After some introductory remarks from Ms. Choi, attendees broke into several groups, each with a moderator from CBA, and discussed future uses for the space.  Afterwards, each group reported its ideas which were mostly consistent with the CBA’s intended proposal.  Some novel suggestions were made, however, including the creation of a pub in the basement of the building, renting the space for weddings, parties and political rallies.

Constructed in 1884 as the First Congregational Church, in 1968 the building became the city’s senior center and was renamed the Smith Baker Center in honor of the Reverend Smith Baker, the church’s pastor from 1871 to 1890.  The building has been vacant since 2003 when the Senior Center moved to its current Broadway location.  It is in dire need of major repairs.

Another part of Tuesday night’s meeting was inquiring of those in attendance of their memories of the Smith Baker Center.  Some newcomers to the city have never been inside, others remember it as the senior center, still others recall attending memorable performances there.  Since the meeting, one of those who attended, Sam J. Anotnaccio, posted his own memories of Smith Baker Center on Facebook.  With his permission, I’ve reproduced his comments below:

These were the last years that grand organ would sing. I remember from 1989 to 1991, I was a student at the Green School, now the Adult Education Center across the street from the Pollard Library. On a Friday, our school would hold it’s monthly assembly at the adjacent Smith Baker Center. It was a special treat and an amazing experience to feel the music permeate through your body. I remember only some select songs could be played, less with time. A small hand full of organ pipes were no longer functional.

The Angkor Dance Troupe was starting it’s educational outreach program. Children were selected from our school to learn and perform the coconut dance, accompanied with a throng of traditional musical instruments. One of the first performances I remember of the Troupe was at the Smith Baker Center.

The slate roof had undergone repairs but it wasn’t enough to stave off the deleterious effects of time and neglect. The senior center had moved on and soon the ceiling began leaking, pigeons had found entry and black mold formed as the basement flooded. After class, before the center was completely sealed off to the public, I would sneak into the old church through the bathroom window and explore. Visiting each pew looking for scraps of hymnal pieces scattered about, I was attracted to the artwork but I came for the acoustics. Alone on stage I’d perform my own rendition of Elvis Presley’s Jailhouse Rock and danced like no one was watching. It was my personal farewell to her.

This was where my appreciation for history, culture, and art first took form. I grew up within this two block radius around the Smith Baker center. The family business and apartment complex across the street was my home. The Green School was where I studied and socialized. The Acre was where all my friends lived. The Pollard Library was my flying carpet to the rest of the world and more. The Smith Baker center was my cultural center. It was my world, my everything, my beginning.

As the first chapters of my old life are remembered I have hopes that the new chapters in my life will see a revival and a return of an old friend. She was a beautiful and inspiring place and still is. Please, if you have the opportunity to share an experience, tell your story.

The Coalition for a Better Acre (CBA) is conducting a feasibility study to bring this hidden gem back to life. Your stories can help that process so please, if you have personal stories of this space please respond in the comments. Thank you!