Back when we still had snow measured in feet rather than in memories, I felt the need to go somewhere south of here.  For reasons I won’t get into, Florida wasn’t an option and we’d already been to Charleston and Savannah.  Once I discovered that Southwest flew direct from Boston to Nashville, that became our destination for a few days last week.  Here are some impressions: 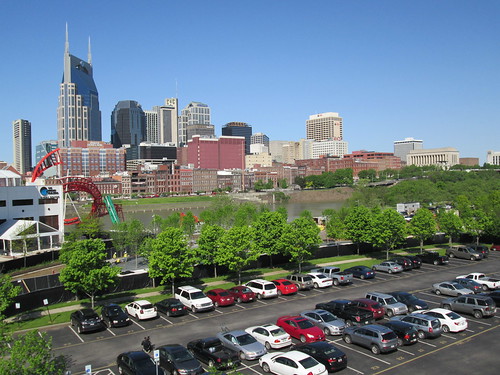 Nashville was very interesting; a southern city that wants to be modern and cosmopolitan.  Healthcare is a huge industry there so the government of Tennessee is working hard to enact some kind of state health care exchange like Obamacare but “nothing like Obamacare.”  A nice reminder that money rules no matter where you are.

I also think Nashville was of great importance during the Civil War but more so for the north which captured it during the war’s first year and held it throughout.  Because the actions in and around Nashville were by any measure southern defeats, the Civil War is not a big part of the local tourism industry.  Conventions are big.  We just missed the NRA (as in National Rifle Association) which was there the week before; when we were there it was a Lego convention.  There are several huge convention center-like buildings with big hotels attached.  The Bridgestone Arena, home of the Nashville Predators, is right downtown and the football stadium for the Tennessee Titans is right across the river.  The city also just opened a brand new ballpark for the Nashville Sound baseball team, the AAA affiliate of the Oakland A’s. 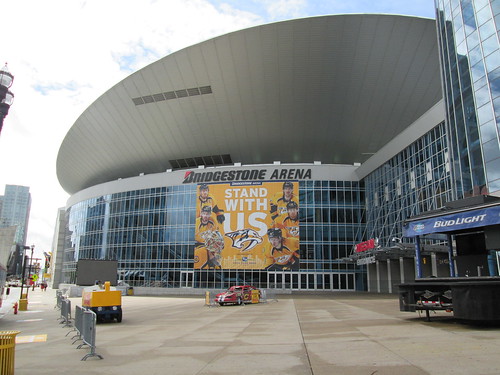 Country music is huge in Nashville which is home to the Country Music Hall of Fame.  That’s not my favorite genre but I do enjoy it in moderate amounts.  I really enjoyed the museum because it showed how so many aspects of American music can all be bundled up the country music umbrella.  We saw a lot of great videos from the earliest days of sound motion pictures to contemporary music videos.  Although I watched it often, I never realized that the TV show Hee Haw was huge for country music – it was one of the first times that the stars in that field were able to get nationwide TV exposure.  Coincidentally, that same night on national TV was the Academy of Country Music awards show.  I watched 90 minutes of it and wished that I hadn’t.  The “best” of this current year’s performers don’t measure up to the best of all time which is what we spent the day seeing.  I did come away with a stack of CDs so help refine my Country Music ear. 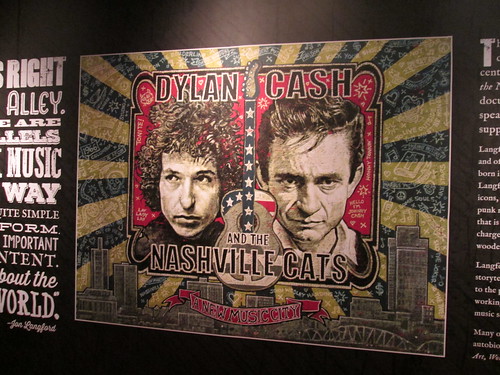 Nashville is also the capitol city of Tennessee so there is an impressive cluster of state office buildings, all made out of grayish-tanish colored “Tennessee limestone” which in smaller doses is quite attractive but was a bit boring in such massive quantities.  On the east lawn (or slope since it’s on a big hill) of the capitol sat three monuments: Andrew Jackson, James Polk and Andrew Johnson – the three presidents from Tennessee, plus a statue of Sgt Alvin York, the WWI Medal of Honor recipient.  We spent several hours in the Tennessee State Museum which included a big section on fossils and early man but nothing on the Scopes trial.  On the whole it was an informative, interesting museum.

Our three favorite things were the Frist Center for the Arts which is the city’s art museum.  It has no permanent collection but installs traveling exhibitions every quarter.  It’s an old post office, about twice the size of Lowell’s Federal Building, and the exhibitions on display when we visited were excellent.  Second, was a place called Hatch Show Print.  It’s a printing business that arose alongside the country music business, printing the posters used to advertise shows.  It has continued in business, producing high quality, vintage-style posters.  It is now owned by the same foundation that owns the Country Music Hall of Fame and is operated as a non-profit.  They had a great tour that explained a lot about the printing business and about the country music industry.  I saw parallels in this story and how the printing business in Lowell arose as an adjunct to the patent medicine industry.  The third best thing was a pedestrian bridge over the Cumberland River.  In echoes of what some wanted to do with the Textile Avenue Bridge, this was an old vehicular bridge scheduled for demolition in 1990 but with state funding it was preserved and converted to a pedestrian/bike bridge over the river connecting the downtown to the football stadium and riverfront park on the far bank of the river. 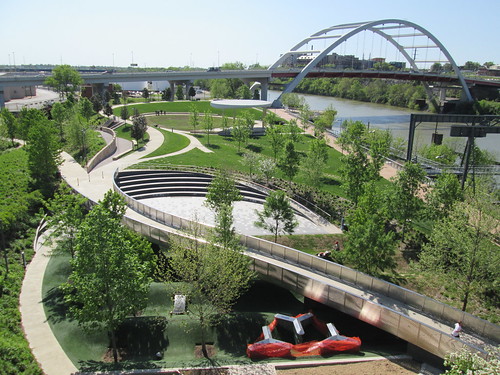 So I would recommend a trip to Nashville.  For a couple of days, you can get by without a rental car but like so many southern cities, it is spread out with minimal public transit options, so a longer trip would need a car.  While it was easy to get around on foot, the car-centric culture of the region is emphasized by a profusion of parking garages in the downtown, typically one per block.  Market forces benefit the consumer, however, because most had “Park all day for $8” signs out front.