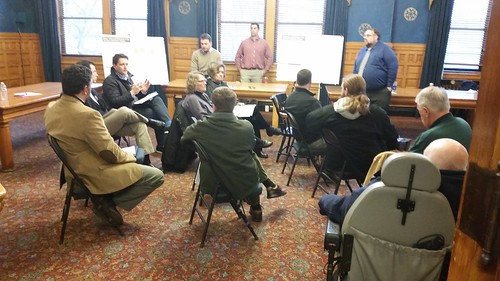 About 20 people attended the public meeting organized by the Northern Middlesex Council of Governments this evening at Lowell City Hall on the current Regional Transportation Plan.  NMCOG is a regional transportation agency established by the state legislature.  Its district includes Lowell and most of the area towns.  The Regional Transportation Plan, which must be updated every four years, provides a blueprint for the expenditure of federal funds by area towns.  NMCOG also provides analytical and planning support to its member communities.

Tonight’s session began with a short presentation on the purpose of the RTP and then became a free-wheeling discussion among all present (which included City Councilor Corey Belanger).  There was also a significant contingent from UMass Lowell including Adam Baacke who was formerly Lowell’s Director of Planning and Development. 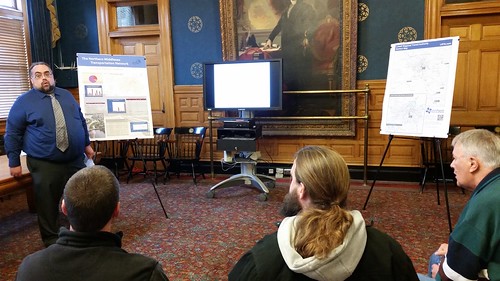 The Lowell Regional Transit Authority was a topic of discussion.  The LRTA is developing a cell phone app that will tell riders how long until the next bus arrives.  There will be a QR code (one of those square bar codes you see everywhere) on every bus stop.  By scanning that QR code, your phone will show how many minutes until the bus arrives based on a GPS transmitter onboard every bus.  LRTA hopes to have this product deployed by July 1, 2015 but that is not a firm date.

The decade or more old move of the bus hub to the Gallagher Terminal rather than the streets of downtown has had mixed results.  The travel time of buses from their maintenance/storage facility to the beginning of their routes was greatly shortened but there is a sense that removing the bus lines from downtown also removed some of the people who formerly shopped downtown so there is some interest in possibly making some modifications to the current structure without completely undoing it.

Other observations about the LRTA: its ridership has shifted towards suburbia over the past decade.  Back then, 80% of its riders were from Lowell; now that number is only 50%.  The LRTA has not yet shifted its downtown routes to account for the two way traffic implemented last summer.  In other words, the buses still go west on Merrimack and east on Market just as they did when that was the only choice.

The UMass Lowell representatives spoke about the benefits of closer cooperation between UMass Lowell transportation services and the LRTA.  Each day, there are 8000 trips individual trips aboard UML buses while the LRTA has just 6200.  No one was advocating a merger or abolition of one or the other.  Instead, there was a recognition that between the LRTA and UMass Lowell, there’s a lot of money being spent on transportation in Lowell and that the load could be better balanced to benefit all involved.

Walkability and bikeability were both of great interest to most of those present.  The planners said that while they have ample data about vehicle traffic, there is almost no data about walking trips or biking trips and that tends to skew the planning process towards motor vehicles.  There was also much talk about the interaction of pedestrians and motor vehicles at intersections which, based on the experience of all who spoke on this topic, is decidedly against safety for pedestrians trying to get across the street.

As for the general topic of walkability, Adam Baacke offered some useful observations: he said don’t think of sidewalks or crosswalks in isolation.  Instead, identify the places someone wants to go to and where they are coming from and figure out the best walking route to get them there.

Many other things were discussed – better layout of bike lanes, how people in wheelchairs also benefit from bike lanes and face daily hazards from sidewalks in disrepair are a couple of examples.

While this evening’s event did not have as its primary purpose discussing Lowell’s walkability, that became much of the discussion with very positive results.  There was a lot of energy and interest in the room.  It was an example of how people who believe that Lowell will benefit from become more biker and walker friendly should seize every opportunity to discuss and promote those objectives.