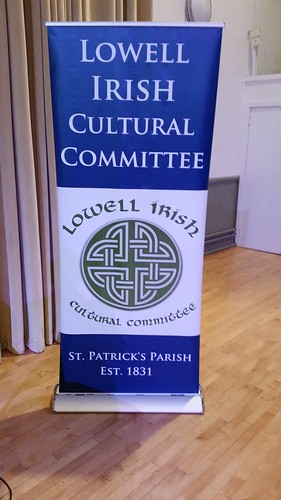 Congratulations to the Lowell Irish Cultural Committee for an outstanding Acre Forum last evening at the United Teen Equality Center (UTEC).  The forum featured a panel discussion from representatives of the many groups that have called the Acre home since the 1820s.  The panelists were Garrett Sheehan representing the Irish community; Dave Ouellette representing the French Canadian community; Peter Hantzis of the Greek community; Beatriz Sierra of the Columbian community; Sovanna Pouv of the Cambodian community; Joey Banh of the Vietnamese community; and Ngme May of the Burmese community (with UMass Lowell’s Ardeth Thawnghmung translating).  I served as the moderator. 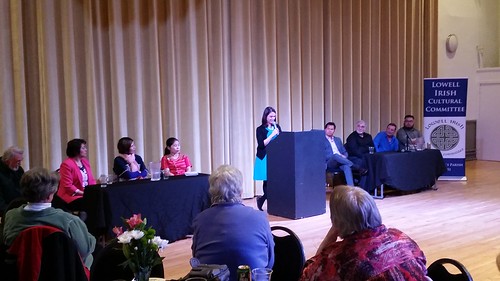 Each of the panelists talked about how they or their ancestors got to the Acre.  There were many common themes: The textile industry, even in its declining years, drew many to Lowell.  Beatriz, for instance, explained that in the 1960s her uncle worked in the textile industry in Columbia but when recruiters from places like Joan Fabrics in Lowell showed up, he moved to this city to work making fabrics and his extended family soon followed.  Beatriz also explained that when she was a teenager here in the 1970s, she found work plentiful and had her choice of jobs in companies that occupied space in the Lawrence Mills and elsewhere.  To me, the accepted version of the Lowell story says that the 1970s were a time of high unemployment and no jobs, but by Beatriz’s account, that may not have been universally true.  It all depends on one’s perspective.

Another common theme as violence and war around the world as a disruptive influence that does have an impact on Lowell.  Peter Hantzis’s parents came here from Greece in the late 1940s, driven from that country by the devastation of World War Two and the internal political strife that followed.  Sovanna and Joey (Cambodian and Vietnamese) clearly ended up in Lowell as a consequence of the Vietnam War and our most recent residents were oppressed minorities in Burma, driven from that country by civil unrest and persecution.  Although we don’t think of the Irish as having been displaced by political turmoil, I believe that is a topic ready for reassessment.  The common story, again, is that the Irish came to Lowell mostly in the late 1840s as a result of the potato famine.  My own great grandparents, seven of them at least, came here in the 1890s as teenagers.  Others in attendance last night had their parents or grandparents come from Ireland as recently as the 1920s.  How much of these later migrations from Ireland to Lowell were caused by political unrest?  Perhaps that will be a topic for a future Acre Forum.

The panelists shared many other insights, both profound and entertaining, about life in the Acre.  They all spoke of the Acre (and of Lowell and the United States) as a place of opportunity, of fresh starts, and of a community that accepted everyone.  As Garrett Sheehan put it, when they were choosing sides for a pick-up football game, you were more interested in how far a guy could throw a football than in his nationality.  All panelists echoed that sentiment in their own ways.

Because I was moderating the discussion, I was unable to take notes and have omitted much from this account.  Fortunately, Alexander from Lowell Telecommunications Corp was there recording the entire evening.  I’ll pass along show times once it’s available. 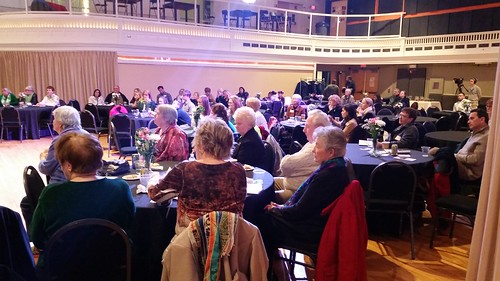 Finally, thanks to Erin Sheehan Caples who was the prime organizer of this wonderful event and served as the Master of Ceremonies during the presentation of the Anam Cara Awards.  Translated as “soul friend” in Gaelic, the Anam Cara awards are presented each year to community members who have gone above and beyond to preserve Irish culture and to better the entire community.  The 2015 Anam Cara Award recipients were Peg McAndrews (posthumous), Paul Sheehy (posthumous), Telemachus Demoulas (posthumous), Leo Mahoney (posthumous) and Marie Sweeney.

4 Responses to Report from the 2015 Acre Forum