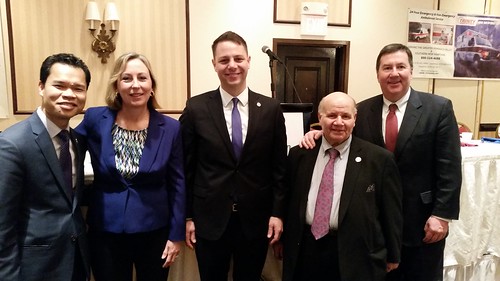 Senator Donoghue, who represents the 1st Middlesex District which consists of the city of Lowell and the towns of Dunstable, Groton, Pepperell, Tyngsborough and Westford, spoke of the ongoing “Commonwealth Conversations” that members of the state senate are conducting across the Commonwealth.  She said two constant concerns raised by citizens are the need for more and better jobs and the cost of health care.  People are also demanding that the state “fix our transportation infrastructure.”  Donoghue then talked about the 2024 Olympics (she filed the bill that kicked off the process), emphasizing that the only Massachusetts taxpayer participation in the Olympic effort would be to fix our infrastructure shortcomings which are things that need to be done Olympics or not.  She said that under today’s economy, places like South Boston, the Seaport District and Kendall Square have thrived but that much of the rest of the state has been left behind.  The Olympic bid will benefit the entire state (especially Lowell which would host rowing on the Merrimack and boxing at the Tsongas Center) and will be a huge boost to tourism, which is already the third largest industry in the state.

Senator Barbara L’Italien, who represents the 2nd Essex and Middlesex District which consists of the city of Lawrence and the towns of Andover, Dracut and Tewksbury, explained that although she was just elected this past November, she had previously served four terms as a state representative for Andover.  She acknowledged her roots in Essex County but said she is quickly and happily become acquainted with Middlesex County.  She is the Senate Chair of the Intergovernmental Affairs Committee which has as a priority seeking out untapped sources of Federal reimbursement for state and city government.  Her background is in social work and she is very interested in education.  She is pushing for a shift to “project based learning” in our schools, which she said is how learning must take place in the 21st century.  She said that our public schools are “showing tremendous innovation”.  She observed that her district is somewhat unique in that she represents both a city and suburbs.  When you represent just one or the other, you tend to take stronger positions on issues that makes you less inclined to compromise.  Representing both requires you to see things with a broader view.

Representative James Arciero represents the 2nd Middlesex District which consists of Westford, Littleton and three precincts in Chelmsford.  He explained that his district “is one of the fastest growing high tech areas in Massachusetts.”   One of his goals during his past term was to identify the needs of businesses in his district.  Three big ones stood out: (1) improving the “reverse commute” for people who live in Boston but work at high tech companies in Westford/Littleton; (2) infrastructure improvements; and (3) tax credits and grants which he said have been key to creating and retaining more than 3000 jobs.  His goal for the coming term is to continue this economic development momentum and to troubleshoot any problems that arise.

Representative Marc Lombardo represents the 22nd Middlesex District which consists of the town of Billerica.  He started by expressing the pride he feels in being the “token Republican” of this group which has been the case for a number of years.  He said that organizations like the Chamber of Commerce are “the lifeblood of the community.”  He has found that business owners are concerned about the cost of doing business, especially with the “2020 workplace.”  By 2020, he said, 50% of the workforce will be millennials and that we must find ways for college graduates to stay in and be part of our communities.  Lombardo is “very happy with our new Governor” and says besides the challenge of the current $750million deficit and the added costs of snow removal, the state faces a structural budget deficit estimated by some to be as high as $1.5billion.  He said Governor Baker is committed to reducing the number of state workers and will “slow the unattainable goals of Mass Health.”  Lombardo also spoke about transportation spending, which he said was the highest cost per mile in the United States.  He closed by saying “reform is coming on Beacon Hill” and that it would be helpful to business.

Rady Mom who represents the 18th Middlesex District spoke next.  He talked about the practical challenges of being a freshman legislator but he also said that as a small business owner and father of four, he understood very well the economic and educational challenges facing the state.  He then shifted to talking about the incident over the weekend in Lowell in which a woman who was sleeping in her house was wounded by gunshots that were fired into the building.  He said that the first bill that he sponsored in the state legislature was one to increase the penalties for firing a gun into a dwelling house.  He said we must have zero tolerance for shootings; that one shooting is too many; and trying to change that is a big reason why he ran for office.

Dave Nangle, representing the 17th Middlesex District, talked about the legislature’s recognition of the struggles constituents have faced simply getting to work due to the weather and poor performance by the MBTA.  He said his office was extremely busy yesterday fielding phone calls from state employees seeking to take advantage of the proposed early retirement package which should result in substantial savings to the Commonwealth.  He closed by explaining that his colleague, Representative Tom Golden, was not present because he was accompanying House Speaker DeLeo to a meeting in Boston.

James Miceli of the 19th Middlesex District (most of Wilmington and Tewksbury) was the final speaker.  He cited his experience working as a selectman and with selectmen in attracting major manufacturers to Wilmington in unobtrusive settings as evidence of what government can do to assist business.  He also said that as a business owner himself (he owned two insurance agencies through the years), he understood the challenges facing many in the room.  He said that he continues to be a member of the Ways and Means Committee which he enjoys.  He said he has previously worked with Charlie Baker during the Weld and Cellucci administrations.  He said Baker was a “great person to deal with” and predicted a “turn for the best” under the new administration. 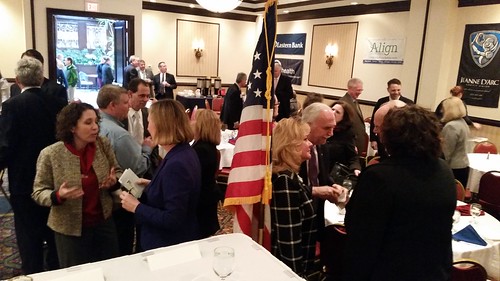 The Legislative Breakfast is officially over but the work continues

The Legislative Breakfast is officially over but the work continues