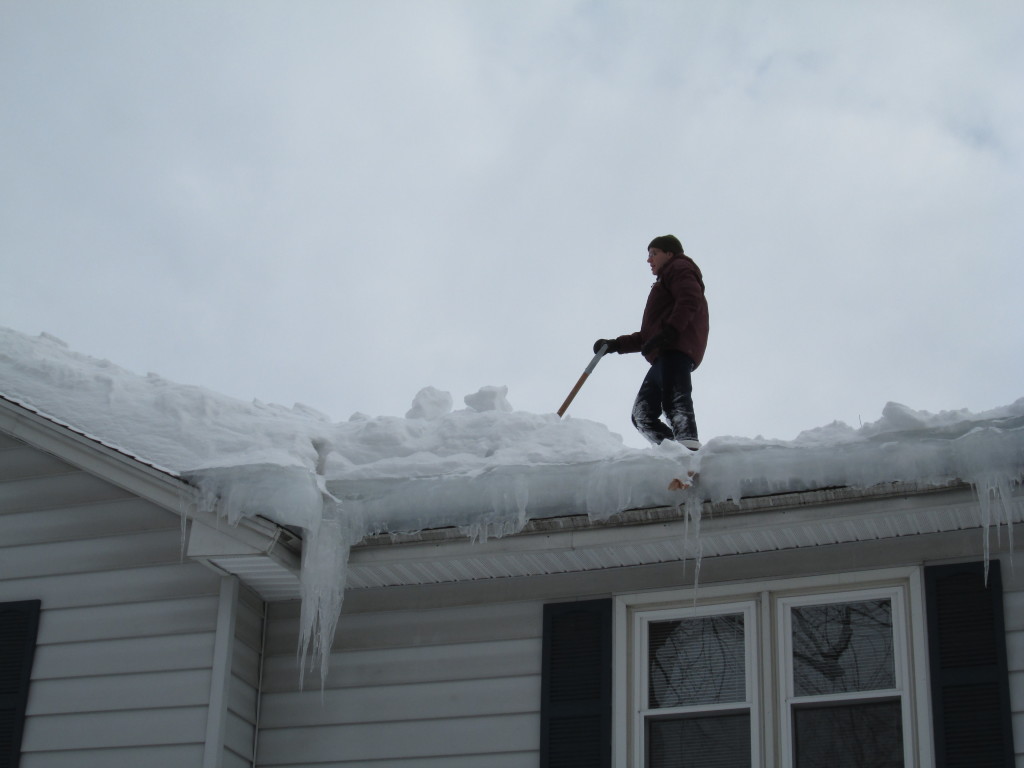 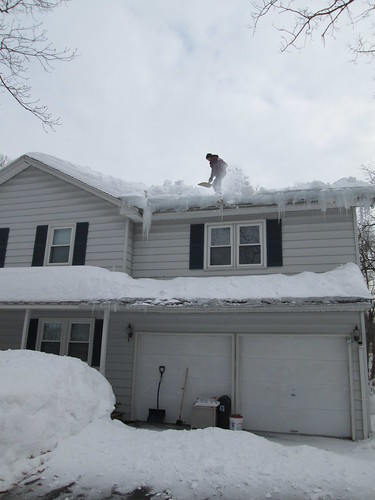 Removing snow from a roof

Last week it was ice dams; this week it’s unstable roofs.  With the forecasters calling for our current storm to end with heavy, wet snow or even rain, many Lowell residents took steps to clear their roofs of snow and thereby reduce the risk of roof collapse or other damage from the weight of the accumulated snow.  It was tough to miss the many vans and pickups loaded high with ladders scooting around the city this week.  More than once I caught sight of extension ladders propped against the side of multistory houses, pointing to shovelers tossing tons of snow from above to below.

At least one slice of the economy – snow removal and related services – is thriving.  At work this week I answered a phone call from someone working for a snow damage remediation company based in Wisconsin.  Because there is no snow in Wisconsin, they were sending crews to Massachusetts and were investigating permitting/registration regulations here.  At about the same time, combat engineers from the Vermont National Guard were clearing snowbanks from the streets around the courthouse.  You know it’s been a snowy winter when specialists from Wisconsin and Vermont are able to come help us in the middle of winter. 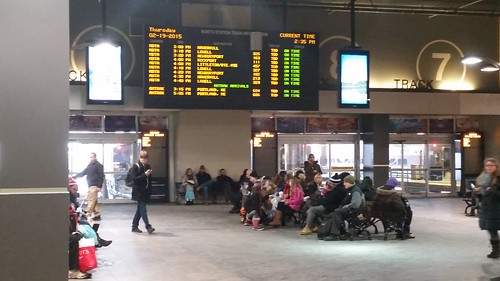 Thursday I had a meeting in Boston and I did use my preferred method of reaching that city – commuter rail.  It worked out fine for me.  I caught the 8:25 am train from Lowell which actually left at 8:37 which I didn’t think was too bad (it was late arriving and turned around promptly).  We had received about 3 inches of powdery new snow overnight and as the train sped south it threw up an impressive spray of snow from both sides.

Coming home, I caught the 3:10 pm train which left North Station on time.  For a mid-afternoon train it was pretty crowded, partly because Disney on Ice was at the Garden (lots of 5 year old girls in blue gowns on the train) and also because the T as part of its “service recovery schedule”, had cancelled in advance quite a few trains.  While that created an inconvenience for those wanting to leave Boston earlier, at least they had announced the cancellations days in advance and not a few moments before scheduled departure.

Because I’d written about commuter rail performance before, I did a quick Facebook post from North Station with the above picture, writing “Commuter rail working pretty well today.”  That unleashed a barrage of responses of the “are you crazy?” variety accompanied by a variety of rail commuting horror stories.  So let’s just say commuter rail still has a way to go.

At Tuesday’s City Council meeting, Mayor Elliott had a motion for the city manager and the auditor to provide a report on the impact of a new Lowell High School on the city finances.  With a potential price tag of several hundred million dollars, even with state reimbursement for a majority of the cost, the city could be on the hook for close to $50 million, not a negligible amount.

The motion passed unanimously but the two councilors who spoke on the motion, Ed Kennedy and Corey Belanger, had some interesting things to say.

Kennedy asked if it would be wise to have the City Council publicly state its preference of a location for the high school (i.e., downtown or elsewhere) prior to the feasibility study being conducted.  Based on the entirety of his comments, I think he’s trying to avoid paying more than $1 million for a feasibility study that concludes the high school should be in one place when the council already believes it should be at another place.  Trying to save the money makes sense but the timing doesn’t.  The feasibility study is conducted by the state School Building Authority; the city just pays for it.  The study is supposed to be an objective, unbiased view of what’s ultimately best for the students and the city.  This pre-emptive vote on a location seems to say “go ahead and do your objective study as long as you reach the same conclusion already help by the city council.”  Maybe I’m missing something.

Councilor Belanger said he supported the mayor’s motion for a financial analysis but then went on to say he would want the question of whether to undertake this project regardless of location to be put to a citywide referendum on this November’s election ballot.  He said “We should let the people who are going to pay for this to have a say in whether we go forward with the project.”

Sorry, but isn’t that what we elect him and his colleagues to do on our behalf?  What other expenditures should be put to a referendum?  New police officers?  Pay raises?  A parking garage in the Hamilton Canal District?  Where does it end?

One fundamental problem here is that the most pressing need of the Lowell Public School system is for more seats in middle schools rather than a new high school.  But several new middle schools would be needed and the state school building program only allows a single project per community.  This led the school committee to set aside the middle school plans and focus on a new high school.  It’s tough to build community-wide consensus on such a big undertaking with a backstory like this.

This coming Tuesday, February 24, at 5:30 pm at the City Council Chambers at City Hall, the Transportation Subcommittee will meet to discuss coming changes to the Lord Overpass and vicinity.  If you are interested in making Dutton Street, Thorndike Street, and the Lord Overpass, more pedestrian- and bike-friendly, you should attend this meeting and voice your concerns and expectations.

Lots of ironic jokes accompanied the news that Winterfest was being postponed but City Manager Murphy explained it best when he said he’d rather have city employees working on public safety tasks like widening intersections and clearing sidewalks than erecting the Winterfest beer tent.  So now Winterfest is Friday, March 13 and Saturday, March 14.  That Monday, March 16, is the longstanding St Patrick’s Day breakfast except now it’s a dinner.  Then Tuesday, March 17 is St. Patrick’s Day.  Sounds like the Vermont National Guard should stick around.  Instead of doing snow removal they can run sobriety checkpoints.