I always welcome the new year as a time for fresh starts whether it be personal goals like working out or eating better or communal objectives like increasing voter turnout or making the city more walkable.  Celebrating the actual passage of one year to the next – midnight on New Year’s Eve – is not that big a deal for me.  Last night we celebrated with a home cooked meal and a viewing of the 1980’s movie Hopscotch, a Cold War comedy starring Walter Matthau, Glenda Jackson, Sam Waterson and Ned Beatty (which I strongly recommend).  This morning, I got to thinking about some past New Year’s Eves and some of the traditions that surround them.

The first thing I remember about New Year’s Eve was the excitement I felt as a child at being able to stay up until midnight.  What happened at midnight was a bit anticlimactic which might explain my lack of enthusiasm for the event ever since.

As a teenager, I remember watching whatever college bowl game was on TV that night.  I have a particular memory of watching Notre Dame play and with the help of Wikipedia, I think it was the December 31, 1973 Sugar Bowl in which #3 Notre Dame defeated #1 Alabama, 24-23.  Because there were only a handful of college bowl games back then (Orange, Sugar, Cotton and Rose) and all were played on New Year’s Eve or Day, I think they were more of an event than is the case today when there are dozens of bowl games spread throughout December and January.

Just a few years later I remember hearing the frightening news that a prominent doctor, Hugh Mahoney along with his wife and 14 year old son were murdered in their Tewksbury home late in the evening of December 31, 1975.  I think three men from the Keene, New Hampshire area were eventually convicted of the murders which occurred during a burglary.

Back in the late 1970s while I was in college I went to some of the early First Night celebrations in Boston (the first one was in 1975).  Back then there weren’t as many people and you could move from venue to venue to see a variety of performances.  I’m sure there was a lot of business funding but back then it seemed more communal and less corporate than was the case the last time I went in the early 1990s.

In the early 1980s, I found myself in Germany for at least one New Year’s Eve (I was in Germany for three years but came home on leave for Christmas twice).  The big Germany tradition, at least in the mountains of southern Bavaria, was to go off into open spaces and fire big old muzzle loading guns into the air, I think to ward off evil spirits in the coming year.  It being Germany, the shooting was followed by the consumption of prodigious amounts of beer.

Lowell tried its own First Night in the early 1990s – I’m guessing 1993 or 94.  It was centered around Middlesex Community College and the Lowell Memorial Auditorium and was very family friendly.  As a participant (as opposed to an organizer) it seemed very successful, however, it only lasted for a year or two.  Eventually the city began Winterfest in February which kind of sucks up all the interest in winter-time civic activities.  As between the two, I thought First Night was better.  Maybe the city will try to revive it at some point.

December 31, 1999 was another memorable New Year’s Eve as we sat amongst candles, cans of tuna fish and containers of fresh water in case the electric grid failed and chaos ensued.  It didn’t.  The transition to the new millennium went smoothly.  I’ve always maintained that Y2K preparedness put the US economy, particularly the hi-tech sector, into overdrive as billions of dollars were spent upgrading computers and other technology.

A few years ago we decided to try what I think is a Massachusetts tradition of ordering Chinese food for New Year’s Eve.  I like Chinese food but decided to get it on nights the restaurants weren’t so busy.  Three years ago I did a Facebook post asking about the tradition.  It received more than 100 comments.  I reposted them two years ago in a blog post.

I guess if I have one enduring New Year’s Eve tradition, it’s watching the Three Stooges Marathon on channel 38.  If nothing better was on TV – a bar set pretty low – the default channel was the Marathon.  I tried briefly to find it last night and quickly gave up so maybe the magic is ending. 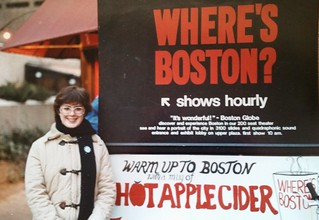 My favorite New Years Eve was December 31, 1981 while home on leave from US Army duty in Germany.  A month earlier while on a training exercise in the forests outside Rothenberg, I met a fellow soldier named Roxane who was also going home for Christmas.  The home she was going to was in Manchester, New Hampshire, only 30 miles from Lowell.  I got her 603 phone number and once home, gave her a call.  We ended up at Boston’s First Night that year.  Unknown to us at the time, it was the first of 33 and counting consecutive New Years Eves together.

Happy New Year to all our readers.