Besides the four main presenters who all did PowerPoints from the podium, there were at least eleven others who I called upon to pop-up and talk about how they and their organizations are using social media to help accomplish their goals.  Looking around the crowd of 61 people, I could have called on several dozen more.  It really brought home to me how much is happening in Lowell.

But one of the messages from the conference was that with the profusion of media outlets available today, everyone is on a different channel so it’s tough to reach everyone and for the individual, it’s tough to discover all that is going on in the city.  It’s a challenge but it’s one we should collectively take on because finding a way to effectively aggregate this information would help residents of the city and indeed people from across the state and the region to see Lowell in a different and better light.

For more about the Social Media Conference, check out the blog post I did last night. 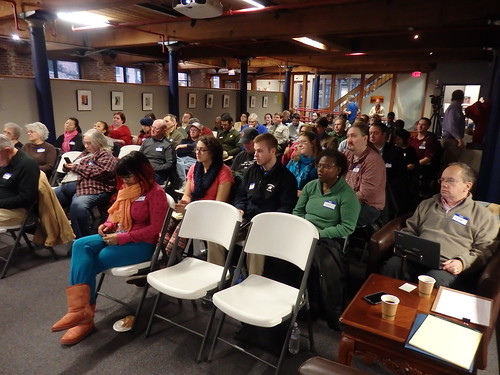 It seemed like a long time since I had watched a city council meeting live so it was good to catch the one on Tuesday night (I’m serious!).  Some of the most substantive discussion of the evening involved long term city finances, specifically, the council’s unanimous vote to request the state eliminate the required “Chapter 17 Stabilization Fund.”

Back in the early 1990s the city faced a state takeover of its finances due to extreme budgetary woes.  Rather than an outright takeover, the state required a Financial Control Board that approved city financial decisions.  On the board sat state officials from the Department of Revenue along with Lowell’s city manager and mayor.  The group and the city as a whole did the tough work to stabilize the city’s finances and the control board was eventually dismantled.  A residue of this episode was this stabilization fund of several million dollars that the city is required by state law to maintain.

Back in March of this year, the city withdrew $2 million from that fund and used it to help pay down a deficit in the city’s net school spending obligation.  Under the Massachusetts Education Reform Act (enacted coincidentally at about the same time that the city’s finances were in such dire straits), millions of dollars of state funds flowed into the public schools of gateway cities like Lowell.  To ensure these cities still had a financial stake in their schools, Ed Reform created a complex formula to calculate the amount of money these cities must by law contribute to their schools.  That amount is called “net school spending.”

For a bunch of reasons – the topic of a future post, perhaps – the city of Lowell has almost always been lax in meeting its obligation under net school spending.  That laxity caught up with us last winter when a state audit decreed the city to be millions of dollars in arrears in its contributions to the public school.  The city couldn’t dodge the bill any longer and so then-City Manager Bernie Lynch recommended that the council withdraw $2 million from the Chapter 17 Stabilization Fund and apply it to the Net School Spending deficit ON THE CONDITION THAT the money be returned to the Stabilization Fund in Fiscal Year 2015.

By its vote Tuesday night, the council not only made clear its intention NOT to replenish the fund but also used the balance of the fund – several million dollars – to pay down the remainder of the net school spending deficit.  This created a lot of angst on the city’s blogosphere.  Watching the meeting, however, I was impressed that the council acted unanimously in this.  Several councilors – Mercier and Martin in particular – expressly stated that they were hesitant to support it at first but that the city administration made a sound and compelling argument to do so.

A big part of that argument is that the city has other reserves adequate to meet any contingency.  Councilor Milizazzo, who did vote for this move, tactfully pointed out that the reserves spoken off might not be all that they appear.  Specifically, part of what’s considered “reserves” is the city’s untapped levy capacity.  I’m no expert on Proposition 2 ½ or municipal finances, but as I understand it, state law allows a city to assess property taxes at a certain rate, a rate that increases over time.  Many communities tax right at that maximum but not Lowell.  We have “unused levy capacity” meaning the city could extract considerably more in property taxes from its residents than it does now.  This gives the city the ability in a time of crisis to bump up taxes to fill any financial shortfall.  This doesn’t mean that the city council would have the political will to do that.  In fact, I’m doubtful that this or any council would do that since it would be political suicide, at least in the short run.

However, it’s still not time to panic.  By following sound budgetary practices, the city should be able to avoid these types of financial crises.  The trap that ensnared the city back in the early 1990s was that revenue projections upon which budgetary expenditures were based were overly optimistic and the city was far too slow in spotting the emerging deficit and acting promptly to address it.  By the time the city council discovered the problem and summoned the will to act, it was too late and the deficit was insurmountable.

Using that history as a guide, this and future councilors must be diligent in confirming that actual revenue meets revenue projections throughout the year.  Any downward deviation from projections requires prompt action.  It also requires the self-discipline to pay for proposals that cost money.  There are hundreds of ways city government can better serve its residents but most of them cost a lot of money.  Any councilor who proposes something that will add to the city’s budget should also explain where the money to pay for the proposal is coming from.  Without that kind of discipline, the city could quickly find itself in the type of financial bind that has visited Lowell not just in the early 1990s, but several times since.

A positive part of the council meeting was the city’s formal acceptance of a $1.6 million Federal grant for the expansion of the city’s trolley system. 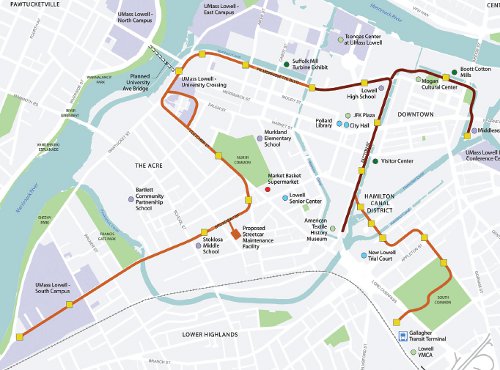 The two major phases of the expansion would extend the existing line the ends at Swamp Locks (across from the American Textile History Museum) and run it through the Hamilton Canal District, up South Street and then across the South Common to the Gallagher Terminal.  The second phase would extend the existing line that ends in front of the Suffolk Mills alongside Fr. Morissette Blvd up to University Crossing across from the Howe Bridge over to Fletcher Street then down Fletcher, past the North Common to Broadway and then out Broadway to UMass Lowell South Campus.  It would be an impressive network. 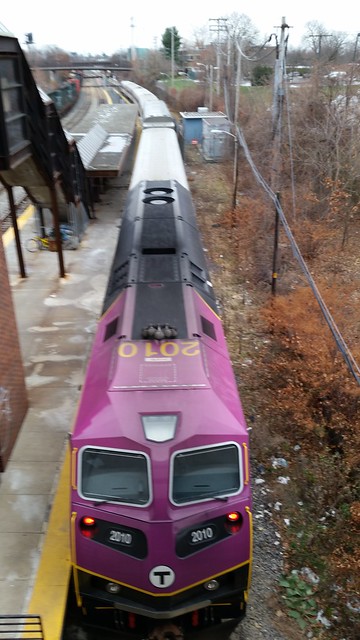 Trains were on my mind this week because I rode them into and out of Boston on Monday and Tuesday while attending the Massachusetts Digital Government Summit.  The 6:51 a.m. train from Lowell which I took on both days was packed with people standing in the aisles after we left Winchester.  As we neared North Station on Monday, flashing red lights on the down ramp from Route 93 to the Leverett Connector caught my eye.  It was a bunch of emergency vehicles: a motor vehicle accident had shut down the ramp I would have used to exit the highway had I driven.  My commuting smugness was disabused on Tuesday, however, when the train slowed to a stop at the West Medford station and never started again – at least not for 20 minutes. 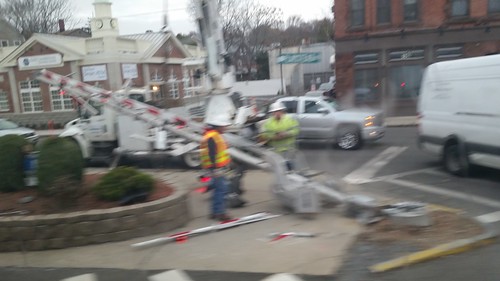 Moment early, a motor vehicle had run down the train crossing device and knocked it across the tracks.  We had to wait for a railroad repair crew to arrive on the scene and winch it off the tracks.  I guess the lesson is that when traveling to Boston on a weekday morning, give yourself plenty of time regardless of the method you choose to travel.

Nevertheless, I much prefer the train to driving.  If you’re also interested in rail travel, you might check out Train Riders Northeast a website devoted to “changing the way the Northeast Travels.”  Among many things discussed on the site is the possibility of train service from Portland, Maine to New York City.  As a friend who is more knowledgeable than me of rail infrastructure informs me, since there’s no way that this line would pass through Boston due to the separation of North and South Stations, the most likely path would take it through Lowell and then Worcester.  Imagine boarding a train at the Gallagher Terminal and getting off at Penn Station in the heart of Manhattan.  So even if New Hampshire continues to drag its feet on the Concord NH to Boston service, there’s still a possibility of enhanced rail service for Lowell.

Today at 10 am the Greater Lowell Veterans Council will have a Pearl Harbor Remembrance ceremony at the Lowell Memorial Auditorium.  Everyone is invited to attend.  One reason I think it’s important to “remember Pearl Harbor” is that it was a powerful example of how our national imagination can fail us with disastrous consequences.  It’s pretty well accepted that in the days and weeks leading up to the Japanese attack on Pearl Harbor, the indicators of the attack were all in the hands of American intelligence services but no one had the flexibility of mind to put those pieces together and thereby foresee a massive Japanese air attack.  When it came, it was a complete surprise.  Giving credence to the saying that “those who forget history are condemned to repeat it”, the same thing happened to us on 9/11.  All the pieces were in place to interdict the attack but our national mindset lacked the nimbleness needed to envision such an attack which was a pre-condition to stopping it.  Remembering Pearl Harbor is a way of keeping an open mind about the world around us and the threats it poses.  This is more prominent in my mind this year than is typically the case because the keynote speaker at the aforementioned Massachusetts Digital Government Summit was one of the CIA analysts who tracked bin Laden and Al Qaeda both before an after 9/11.  If you don’t know what I’m talking about, check out the trailer for Zero Dark Thirty.  As soon as time permits this coming week, I’ll do a blog post about what the CIA analyst had to say.

One Response to Lowell Week in Review: December 7, 2014