Congratulations to Enterprise Bank for another wonderful Celebration of Excellence event last night at the Lowell Memorial Auditorium.  Congratulations also to those who were recognized for their contributions to the community with Excellence awards.  The recipients were:

Business of the Year: (2 awards) Colony Foods of Lawrence and Parlee Farms of Tyngsboro;

Educator of the Year: Rebecca Duda of Dracut;

Non-Profit of the Year (2 awards): Groundwork Lawrence of Lawrence, and Catie’s Closet of Dracut; 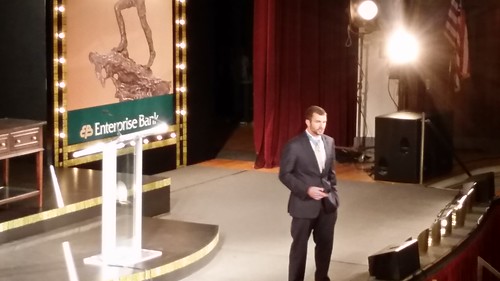 The Keynote Speaker was Sal Giunta who was awarded the Congressional Medal of Honor for extreme valor in Afghanistan in 2007.  Sargent Giunta (now a civilian) gave a fascinating, near hour-long account of his pathway into the military as a mediocre high school student in Iowa who was inspired to service by watching in real time the September 11, 2001 terrorist attacks during his high school chemistry class.  He then described the rigors of basic training and airborne school and the camaraderie and dependence on each other that developed in his unit, Company B, 2nd Battalion (Airborne), 503rd Infantry Regiment.  He described hard fighting under primitive conditions in Afghanistan and the specific engagement that earned him the highest award for valor that this nation can bestow.

At the beginning, at the end, and throughout his talk, Sergent Giunta emphasized that life is not about individual achievements.  It’s about being part of a team that works together for the greater good.  He said that’s how it works in the Army and he said that after hearing of the achievements of the award recipients and the other nominees, he knew that the will for collective action for the good of all was alive and well in Greater Lowell.

Following is the official citation for Sergent Giunta’s Medal of Honor:

The President of the United States of America, authorized by Act of Congress, March 3, 1863, has awarded, in the name of Congress, the Medal of Honor to

For conspicuous gallantry and intrepidity at the risk of his life above and beyond the call of duty:

Specialist Salvatore A. Giunta distinguished himself conspicuously by gallantry and intrepidity at the risk of his life above and beyond the call of duty in action with an armed enemy in the Korengal Valley, Afghanistan, on October 25, 2007. While conducting a patrol as team leader with Company B, 2d Battalion (Airborne), 503d Infantry Regiment, Specialist Giunta and his team were navigating through harsh terrain when they were ambushed by a well-armed and well-coordinated insurgent force. While under heavy enemy fire, Specialist Giunta immediately sprinted towards cover and engaged the enemy. Seeing that his squad leader had fallen and believing that he had been injured, Specialist Giunta exposed himself to withering enemy fire and raced towards his squad leader, helped him to cover, and administered medical aid. While administering first aid, enemy fire struck Specialist Giunta’s body armor and his secondary weapon. Without regard to the ongoing fire, Specialist Giunta engaged the enemy before prepping and throwing grenades, using the explosions for cover in order to conceal his position. Attempting to reach additional wounded fellow soldiers who were separated from the squad, Specialist Giunta and his team encountered a barrage of enemy fire that forced them to the ground. The team continued forward and upon reaching the wounded soldiers, Specialist Giunta realized that another soldier was still separated from the element. Specialist Giunta then advanced forward on his own initiative. As he crested the top of a hill, he observed two insurgents carrying away an American soldier. He immediately engaged the enemy, killing one and wounding the other. Upon reaching the wounded soldier, he began to provide medical aid, as his squad caught up and provided security. Specialist Giunta’s unwavering courage, selflessness, and decisive leadership while under extreme enemy fire were integral to his platoon’s ability to defeat an enemy ambush and recover a fellow American soldier from the enemy. Specialist Salvatore A. Giunta’s extraordinary heroism and selflessness above and beyond the call of duty are in keeping with the highest traditions of military service and reflect great credit upon himself, Company B, 2d Battalion (Airborne), 503d Infantry Regiment, and the United States Army.