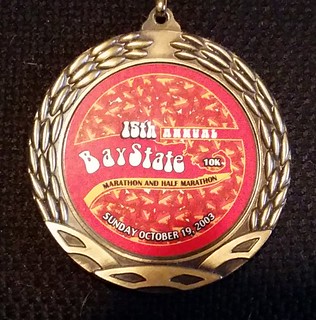 My medal from the 2003 Baystate Half Marathon

Back in 2003 I joined the great mob of runners that spent a Sunday morning in Lowell running prodigious distances along the banks of the Merrimack River in the Baystate Marathon and Half Marathon.  Running my first half marathon was a terrific experience made all the more so by doing it on a familiar, incredibly beautiful course in my own city.  I repeated the 13.1 mile run the following year after which I cut back to shorter distances.

The Baystate Marathon has never cut back.  If anything, it is bigger and more popular than ever.  One reason it is such a popular race is the course.  Because it tracks along both sides of the Merrimack, it is flat and conducive to speedier-than-usual runs.  Many depend on this race and on this course to give them finish times fast enough to qualify for the springtime Boston Marathon.

On race day this year I noticed more than the usual amount of chatter on Facebook and Twitter from Lowellians who were condemning the race because it shut down traffic on several of the bridges across the Merrimack.  So it was no great surprise that the city council has gotten involved (there’s a motion about the marathon and the traffic delays on tomorrow night’s agenda).

Maybe it’s a good idea for the council to pay more attention to this great event that brings thousands of runners and their supporters into the city.  We constantly struggle to get people to come here and to present a good image of the city: the Baystate Marathon accomplishes both of those things.  Having a few bridges – the Ouellette, Howe, O’Donnell and Rourke Bridges – closed to traffic for a couple of hours is an inconvenience to residents but given all the benefits the city reaps from this event, it’s a small price to pay.  The council should embrace the Baystate Marathon and as it approaches next year do a better job of alerting residents to the race and the resulting changes to traffic patterns.  With a bit of prior planning, individual inconveniences can be kept to a minimum.

At the same time, the city council should embrace Lowell’s running community which has a long and illustrious history in the city.  Turn the Marathon into a citywide celebration that promotes running, walking and overall fitness.  That’s the kind of opportunity a forward-thinking city would embrace, not turn away. 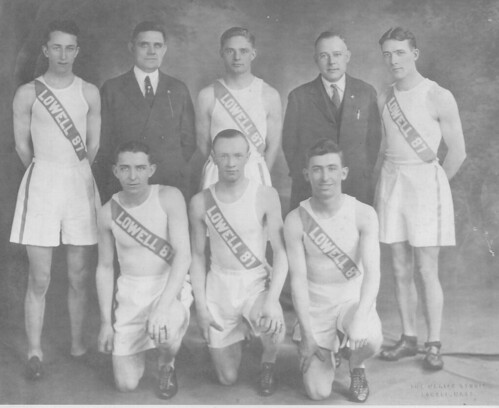 One Response to Don’t Mess with the Marathon