It was great to see Governor Patrick in Lowell on Tuesday, bringing even more state money to the city.   The Governor’s opening comment – that when he looked around he could not see a building that had not benefited from state funding in some way – was right on.   He could travel to a number of places in Lowell and say the same thing. 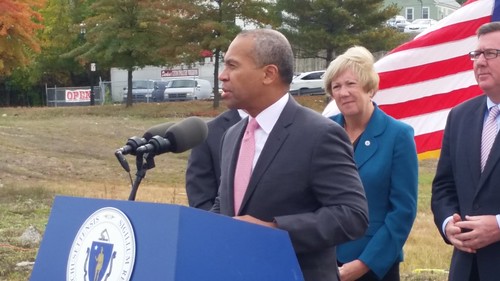 When talk turns to the troubles of urban communities, we often hear whining that the suburbs don’t pull their weight while cities carry a disproportionate burden in dealing with the society’s problems.  Such sentiments ignore the rest of the equation: that state government funnels a lot of the taxes paid by suburbanites to cities like Lowell.  I’m happy that Lowell has been able to benefit from it (which is a testament to the effectiveness of all who represent and have represented the city in the state legislature).

Governor Patrick’s comments brought to mind remarks made by Frank Keefe, the state’s budget chief under Governor Dukakis after a stint as Lowell’s chief planner, in a speech he gave in Lowell back in 2010.  Keefe (who is the brother of Jim Keefe, one of the principals of Trinity Financial, the developer of the Hamilton Canal District) called Lowell “a beacon that must be sustained as a role model for the rest of the cities in the Commonwealth.”  He said that when he first came to Lowell “the politics of patronage and negativity prevailed” but then a critical mass of local leaders decided that “Lowell should find its future in its past” and embraced preservation.  The key to Lowell’s success, according to Keefe, was a “shared vision arrived at by consensus that embraced every constituency.”

As I recall the faces of those gathered Tuesday to hear Governor Patrick speak at the vacant lot that will soon become the new Lowell Judicial Center, I would say Lowell still follows the formula described by Frank Keefe.  From Congresswoman Niki Tsongas to State Senator Eileen Donoghue to Mayor Elliott and many others, all levels of government were represented.  Leaders of banks, businesses and non-profits were also on hand as were neighbors, students and educators.  Despite a member or two of the Lowell chorus occasionally hitting a flat note (often loudly when echoed by pandering media outlets) on the whole, Lowell still shares a unified vision, at least as far as the Hamilton Canal District is concerned.

Lowell’s Future is Its Past

Frank Keefe wasn’t the first one to say Lowell’s future was its past.  To find out who was the first to say it, you should read Paul Marion’s excellent new book, “Mill Power: The Origin and Impact of Lowell National Historical Park.”  Paul had a great book-launch event Thursday night at the National Park Visitor Center and has two others scheduled.  The first is Thursday, November 6 at 4pm at UMass Lowell’s University Crossing bookstore.  The second is at the Pollard Memorial Library on December 3 at 7pm.  Books will be for sale at both events but if you can’t wait to get one – and you shouldn’t – the gift shop in the National Park Visitor Center at 246 Market Street has them for sale right now. 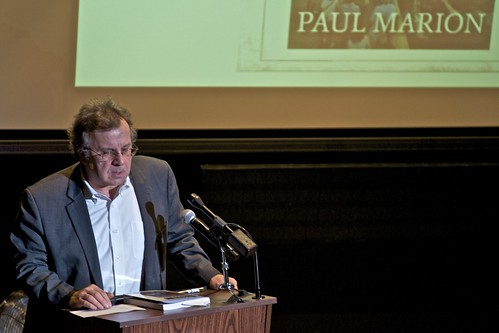 On Thursday night, Paul was effusive in his praise of all of those who assisted with the book but also lauded all of those whose hard work and dedication stretching back to the 1960s made the city that we know today a reality.

Wanted: A Champion of Walkers on the City Council

Since this council took office in January, I’ve watched just about every minute of every city council meeting.  I’ve heard plenty of talk about traffic and parking and even some discussion of bicycles (usually negative comments but at least bikes are mentioned).  What I don’t hear is much talk of making Lowell a more walkable city.

Could our city leaders take even a small fraction of the time they spend worrying about cars and devote it to people who move through the city on foot?  Winter is coming and Lowell as a community has always been deficient in keeping sidewalks clear of snow and ice.  The same is true of cars parked on sidewalks.  How about a citywide strategy to address these hazards as well as the overall disregard by drivers of pedestrians and their safety.  True, councilors have raised concerns about the dangers of crossing Andover Street and Rogers Street, both commendable efforts, but both seemingly reactions to specific complaints about specific points on the ground.  What we’re missing is a comprehensive approach that raises awareness, rewards good behavior, and penalizes bad. 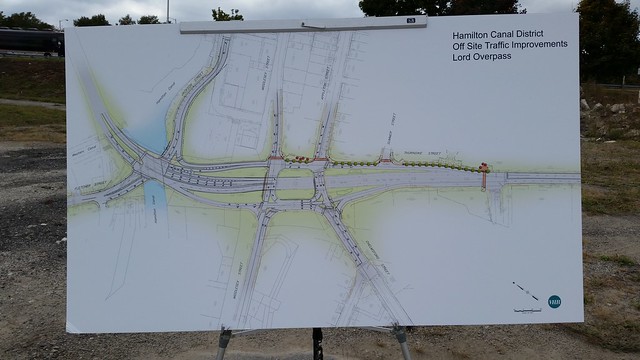 Maybe a good project to kick off this pro-pedestrian effort is to convince the state Department of Transportation to use some of that $15 million the governor just dropped off for the reconstruction of the Lord Overpass to make the entire vicinity safer for and friendlier to pedestrians.  I’ve said repeatedly that the whole Sampson Connector/Dutton/Thorndike stretch from City Hall to the YMCA and the Connector is an impenetrable obstacle to pedestrians.  It chokes off downtown from thousands of residents living in the Lower Highlands and the Acre and it deprives businesses in those neighborhoods of the patronage of those who live and work in downtown.  It’s great that we have this money to redo the Lord Overpass and vicinity, but if we don’t start making noise about improving walkability along and across that route, MassDOT will just hand us a buffed up redo of our existing monument to 1960s car culture, something that will be a detriment, not an asset, to economic development in that part of the city. I grew up not far from Cupples Square and walked there often as a kid for a multitude of reasons, so I took some neighborhood pride in seeing the photos of Governor Patrick walking past doorways that I knew as the Yum Yum Shop or Page’s Drug Store.  The reason for this first-ever gubernatorial visit to Cupples Square?  Governor Patrick was endorsing Democratic State Representative candidate Rady Mom (who owns a business in Cupples Square).

The Governor’s very public endorsement amplified the historic nature of Rady’s candidacy – if elected, he will be the first Cambodian-American in the country elected to a state legislature.  It also illustrates how Rady, again if elected, will be able to leverage the access and recognition that will come with such a historic achievement for the benefit of his constituents and of his city in a way that will far exceed the opportunities available to most other freshman state representatives.

One of the first demands placed on our newest state representative (whoever that might be) will be to find some state funding for more police officers in Lowell.  The city council at its Tuesday night meeting made it clear that increasing the size of the police force is a priority.

I’m all for a larger police force but the money to pay new officers has to come from somewhere.  Everyone always talks about grants, but grants are rare and often come with strings attached.  Only back in the 1990s under President Bill Clinton’s “Community Oriented Policing Services” or COPS program that put 100,000 police officers on America’s streets did Lowell receive outside funding of significant magnitude to make a difference in crime rates in the city.  Our current Congress can barely keep the Federal government funded so it’s fanciful to think that meaningful money for police will be coming from Washington.  I don’t see the funding coming from local sources, either.  It’s easy to engage in abstract discussions about squeezing out waste in government but then it comes time to cut actual programs and eliminate jobs and those discussions get a lot tougher.  Besides, we’re now more than a quarter through the fiscal year so a good portion of this year’s budget has already been spent.

The council has tasked the city manager to searching for more funds for more police, something I’m sure he’ll do diligently.  In the meantime, why not have a thoughtful discussion on the causes of crime rather than the symptoms.  If we tackle as a community things like drug abuse, broken families, and a lack of decent-paying jobs, maybe we’ll discover that those extra police officers aren’t needed after all.

Have you noticed that the media outlets that spent the summer stoking fear of illegal immigrants are the same ones inciting hysteria over Ebola?  What do those two things have in common?  Oh yes, they both involve people who don’t have white skin.  Racism and bigotry, both explicit and coded, are alive and well in the Merrimack Valley and throughout America.

Ebola is a deadly disease but it’s not new or mysterious.  Unless you somehow exchange bodily fluids with an Ebola patient, you don’t get Ebola.  It’s tragic that two nurses in Dallas became infected while caring for the one patient who did have the disease, but it’s pretty clear that what the American health care system thought was a prudent level of preparedness for care givers was inadequate.  Hopefully medical professionals have received that wake-up call and tighten up their safety protocols.  They need look no further than the doctors and nurses working in the midst of the epidemic in West Africa for practices that keep health care providers safe while they treat infected individuals.

As for the rest of us, don’t fall prey to the ignorance and misinformation being spewed by so many media outlets.  Winter is coming and so is the season for colds and flu.  Get your flu shot.  Wash your hands – often.  And vote YES on Question 4 which will give all employees in Massachusetts paid sick time so if they are not feeling well, they can stay home and take care of themselves and not feel obliged to drag themselves ill into work or risk losing their jobs.