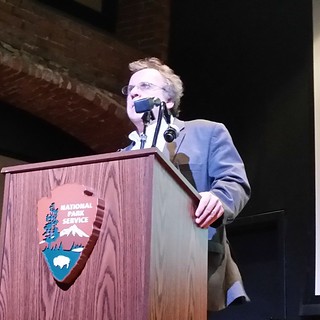 Congratulations to co-blogger Paul Marion for the very successful launch event for his new book, Mill Power: The Origin and Impact of Lowell National Historical Park tonight at the National Park Visitor Center.  The VC theater was packed with well-wishers who heard several people whose interviews are prominently featured from the book read short excerpts.  Paul then spoke in heartfelt terms about the process of creating the book but also about the character of the city as was demonstrated repeatedly throughout the nearly four decades covered by this history.

Lowell National Park Superintendent Celeste Bernardo, who served as the Master of Ceremonies, praised Paul for the book and also praised the people of Lowell for their efforts that culminated in the park, but she also put those efforts in a larger, national context.  She reminded us of how the book, and Paul when he’s talking about the book, tell of the National Park Service’s first reaction to the proposed park in Lowell.  The reaction was negative and only through the persistence of the Lowell advocates did the park become a reality.  Celeste went on to say that one of the reasons for the initial rejection was that before Lowell, the National Park Service only did preservation, not restoration, so that was an entirely foreign concept.  Lowell changed that and the city’s efforts changed the thinking of the National Park Service.  That transformation led to the creation of all the National Heritage sites that the NPS now administers, mostly in cities.

If you haven’t got your copy of Mill Power yet, they’re on sale at the NPS Visitor Center book store at 246 Market Street.  If you’d like to get your copy signed by Paul and hear him talk about the book, he has another reading scheduled for Thursday, November 6 at 4 pm at UMass Lowell’s University Crossing Bookstore.