Governor Deval Patrick will be in Lowell this coming Tuesday, October 14 at 11:30 a.m. at the end of Jackson Street to provide an update on the $15 million state-funded project to re-design the Lord Overpass.  Besides easing that traffic bottleneck the Overpass work will modify that traffic circle to better accommodate the $272 million judicial center that the state is building on an adjoining parcel at the end of Jackson Street.  The Governor will be joined by State Senator Eileen Donoghue and MassDOT Highway Administrator Frank DePaola at the Tuesday event. 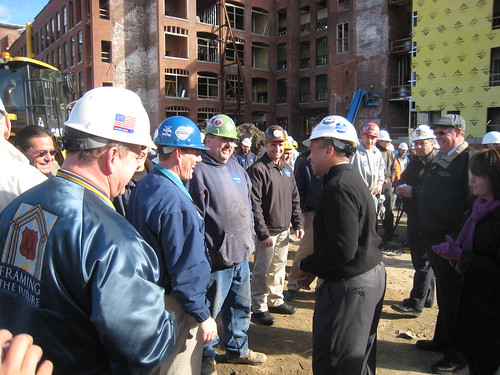 This won’t be Governor Patrick’s first visit to the Hamilton Canal District.  The above photograph shows him visiting the site back in 2010 to check up on the $10 million in state spending on infrastructure upgrades for the development.  I could continue listing all the state expenditures in Lowell during Deval Patrick’s tenure of Governor, but the Massachusetts Democratic Party saved me the trouble by issuing a press release cataloging the long list of state-funded projects in Lowell.  You might recall that the press release was a response to City Councilor Corey Belanger’s assertion as he escorted the Republican nominee for Lieutenant Governor around the city that “Deval Patrick had done nothing for Lowell during his eight years in office.”

For many years, the building at 43 Market Street has been the poster child for neglected structures in downtown Lowell so it was good news to see that it sold this past Monday.  I wasn’t the only one to think so.  After grabbing a coffee at nearby Brewed Awakening on Wednesday morning, I snapped a photo of the building and posted it to Facebook.  It quickly gained 37 comments and 101 Likes. 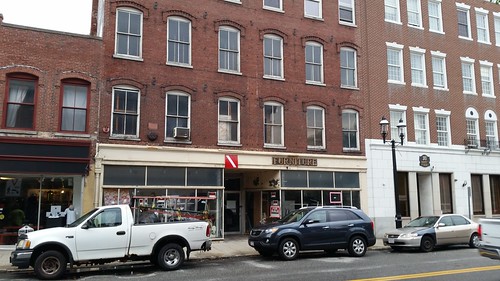 Here’s some of the ownership history of the building: For many years, the building was owned by the Household Corporation and was operated as Household Furniture.  In 1966, the corporation sold the building to Paul and Jane Carey as trustees of Carey Realty Trust.  The Carey family owned the property until 1995 when the building was sold for $72,000 to Adolf Amrhein and Donald St. John as trustees of Riveredge Trust.  Just a year later, Riveredge sold to Thomas J. McElhinney for $84,000.  The following year – 1997 – McElhinney placed the property in the 43 Market Street Realty Trust with himself as trustee.  He’s continued to own it that way up until this past Monday.

I can always remember the name Household Furniture.  In fact, I think I bought a bedroom set there back in 1983 – but I don’t know when that business closed.  I do know that for many years the building has been unoccupied and uncared for.  The Lowell Historic Board noticed that, too, fining the building owner thousands of dollars for failure to maintain the structure.  The Historic Board filed suit in Superior Court back in 2001 to enforce the fines and immediately obtained a default judgment in the sum of $233,300.  Because there was no mortgage on the property, that lien in favor of the historic board was the sole encumbrance on the property.

Fast forward to this week when McElhinney sold the building he had purchased back in 1996 for $84,000 for $625,000 with the city of Lowell dismissing its judgment presumably to allow the sale to be consummated.

The buyers of the property were Benjamin Argueta and Otto Hernandez, both of Revere.  Neither of them have owned any real estate in Greater Lowell.  Their names do appear on the Secretary of State’s Corporations database as having had an ownership interest in the Rodizio Brazilian Steak House at 129 Broadway in Somerville.  According to the restaurant rating site Yelp, the Rodizio in Somerville closed sometime in the last year.  According to the corporations database the corporation that operated the restaurant was dissolved in 2014.

One other fact worth mentioning is that while the sales price was $625,000, there was a mortgage of $610,000 that is held by the seller, Mr. McElhinney.  In other words, the seller is financing nearly 98% of the purchase price so he still has a substantial involvement in the property.

What’s in store for the building and especially the first floor retail space is anyone’s guess at this point.  Is it reasonable to infer a Brazilian Steak House or some other type of restaurant?  We’ll have to wait and see.

No Bikes on Sidewalks

When I posted my notes of Tuesday’s Lowell City Council meeting, I didn’t expect it to evoke howls of outrage from the biking community in Lowell – but it did.  The flash point was the council’s adoption of an ordinance amendment that empowers police to seize possession of bicycles or skateboards that are ridden on downtown sidewalks contrary to the ordinance.

On the Facebook group “Lowell Bike Coalition” the comments almost uniformly interpreted this as another instance of this city council attacking bikes, bikers and bike lanes in Lowell.  While several on this council did express disdain for bicycling as a means of urban transportation months ago in a debate over the utility of the bike lanes on Fr. Morrisette Boulevard, I didn’t get the same vibes from this discussion.

I saw the council struggling to find a way to control a small group of mostly young bike riders who cruise the sidewalks of downtown at pretty good velocity without any regard for others who make use of the same sidewalks.  To me, this was purely a safety issue.  These high speed close encounters between bikers and pedestrians invite hip checks and broken hips.  Taking possession of the bike or skateboard seems the most likely way to get the rider’s attention in a way that imposing a fine or requiring a safety class never would, mostly because neither the fine nor the safety class would stand much of a chance of follow through and enforcement.

Cambridge is held out as a mecca of bike commuting.  I happened to be walking down Mass Ave yesterday and spotted this sign painted on the sidewalk: 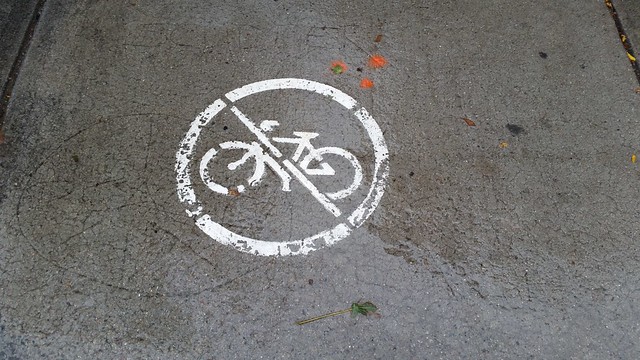 No bikes on sidewalks – Mass Ave in Cambridge

I assume it means no bikes on the sidewalk.  I’m guessing that bicyclists on Cambridge don’t see these signs as an assault on their rights.  They see them as a reminder that bikes belong in bike lanes and not on the sidewalk.

It’s been a long time since I’ve ridden a bike but I’m fully in favor of promoting the use of bicycles as a method of commuting (as well as for recreation and exercise).  If the more vocal proponents of bikes take a strong stand against this ordinance, I think they risk pushing the council further away from acknowledging that being a bike friendly city is good for Lowell.  Why not concede that the council is justified in at least trying to reduce instances of reckless bike riding on sidewalks occupied by pedestrians.  Instead of fighting a losing battle on this one, why not think strategically and use this as an opportunity to promote more and better bike lanes and bike markings on the streets throughout the city.

I hope to see you all at the Lowell National Historical Park Visitor Center at 246 Market Street this coming Wednesday, October 15, at 5 pm for the official launch of Paul Marion’s new book, “Mill Power: The Origin and Impact of Lowell National Historical Park.”  I already have my copy and I’m nearly finished this fascinating book which is also a political and cultural history of Lowell during the past half century. 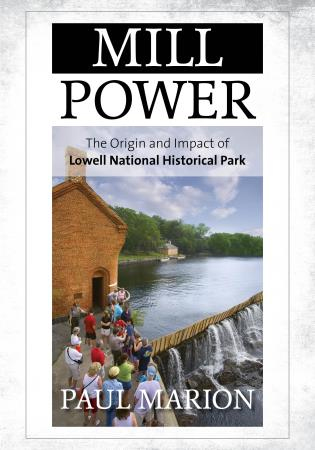 Thanks to all who attended my Lowell Cemetery tours this fall; the tours will resume in the spring and will cover the Lawrence Street side of the cemetery.  Start checking our calendar in March for the exact dates.  Thanks also to Chris on the Learning Lowell blog who wrote a very generous post on the tour he attended this month. 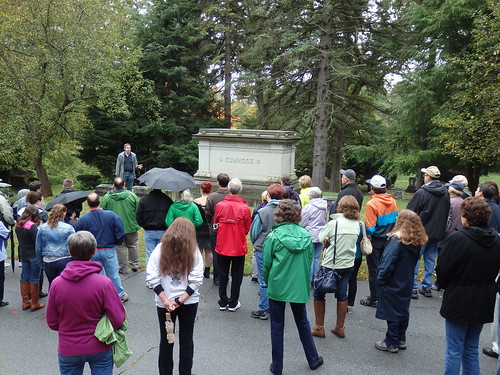