Jeff Speck, a nationally recognized urban planner, was brought to Lowell four years ago by the Lowell Plan to draft a plan to improve the city’s downtown, primarily by making it more walkable.  Called the “Lowell Downtown Evolution Plan”, Speck’s ideas have supporters and critics.  Today Speck was the keynote speaker at this year’s Lowell Plan Breakfast.  His mission was to review the plan after four years and to suggest some “next steps” for the city. 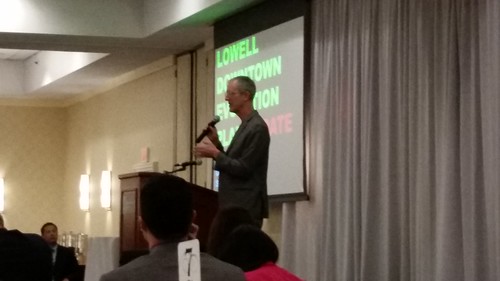 Speck began his remarks by stating that the Lowell Downtown Evolution Plan was the “biggest and most comprehensive plan” he’d ever done.  His experience in Lowell played a large part in him writing a book called “Walkable City: How Downtown Can Save America, One Step at a Time.”  Speck said the book’s publication in 2012 has changed his life, citing a great many lectures and presentations he has given since then.

Focusing on how the plan has been implemented thus far, Speck took up bike lanes first.  He understands that they met with some controversy but that’s always how it is at the start.  He said the new UMass Lowell buildings near Lelacheur Park are fantastic and said the city did a “marvelous job” in implementing two way traffic in downtown.  He said he had assumed that the city “would get it wrong” but that wasn’t the case.  The city even exceeded his plan which had called for a continuation of one way traffic on most of Merrimack Street (the city made it two way for its length).  He did gently chide the city for retreating from two way traffic on Shattuck Street so quickly.  He said he understood that you can’t paint center lines on cobblestones and that there wasn’t enough room for lane-separating barrels, but he said we should have dispensed with the barrels which would have slowed traffic even more.  He urged the city to revisit two way on Shattuck Street in the future.

The next issue addressed in depth was parking.  The starting point, he said, was everyone realizing that parking is not a civil right.  He cited a book by a planner named Donald Shoup titled “The High Cost of Free Parking.”  Both Speck on Shoup advocate letting free market forces rule parking by making the most desirable spots the most expensive.  He urged the city to create a “parking benefits district” in which the revenue derived from higher parking rates for curbside spaces would be funneled back into the streetscape creating a virtuous cycle.

Walkability is always an issue for Speck and he soundly condemned pedestrian walk buttons, saying that walkable cities don’t have them.  The walk buttons incite people to jaywalk rather than crossing in a rational, safe manner.  One of the keys to walkability is to allow the pedestrian to keep moving.  A walk button just causes you to stop and wait for extended periods of time.  He called for a “concurrent regime” that gives the person crossing the intersection a green light at the same time as the cars heading in the same direction get their green light.

Bikes came next.  For those who say they never see anyone using bike lanes, Speck said if you built a bridge only halfway across a river you’d never see anyone using it, either.  To utilize bike lanes, they have to take you someplace so until the city finalizes a fairly comprehensive network of bike lanes, bike usage will not grow significantly.  Speck said the cycling revolution is the biggest planning measure in the most successful American cities many of which are in northern locations with much inclement weather.  Inclement weather is not an obstacle to biking; bad infrastructure is the obstacle to biking.  He said there’s a backlash against bikers underway but explained that the bikers aren’t members of a cult.  There most likely members of the millennial generation, young people who are attracted to city living but only if they can use bikes as a reliable means of transportation. 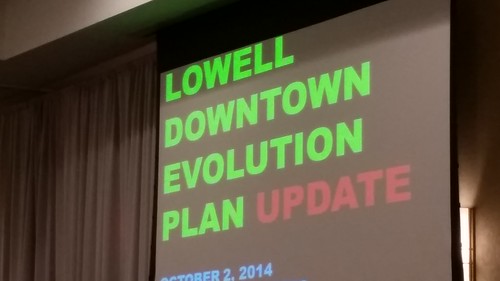 Speck’s next admonition was to “keep it Spic and Span” which does not mean perfection.  He said historic preservation has been great for Lowell but things like sidewalk sandwich board advertisements are not buildings and they should not be regulated as part of the historic district.  That said, he emphatically stated that Lowell’s collection of old buildings is what gives the city its “competitive advantage” and so we should strive to preserve them at all cost.

Looking into the future, Speck said his plan, like most urban plans, is intended to stretch over twenty years.  Don’t be disappointed after only four years.  Don’t lose sight of the big picture.  As for next steps, he urged adding a parking lane to Prescott Street, bike lanes to Arcand Drive and parking and bike lanes on French Street in front of Lowell High.  He also urged Warren Street to be made two way; same with Perkins and Suffolk Streets over near Lelacheur Park.  As for walking, he said to send all the push button to cross fixtures to Lawrence because they were an impediment to walking.  He also emphasized the need to make parking more market based.

Speck closed by urging everyone to understand the trajectory of change.  Happy people are quieter than unhappy people so that’s why you hear about complaints.  Any change has more naysayers than praise.  It’s in the nature of people to be negative.  He said there is crime in downtown but it’s not a risk for an individual to be walking around downtown.  He urged everyone to be positive because perception is so important.  He closed by saying

Lowell is gorgeous.  There’s nothing like it in America.  So much has been done over so long.  Remember that.  And be very positive about it.  See you in 2018.