The Irish in Massachusetts

A few weeks ago I got a look at the final schedule for this past week’s history conference at UMass Lowell.  Done in partnership with Queen’s University Belfast, “The Irish in Massachusetts: Historical Significance, Lasting Legacy” I saw that the conference would cover history, literature and politics with a long roster of world class speakers.  I registered for the entire conference and was not disappointed.  I’ve written an earlier post about the historians and their talks.  Here I’ll cover the politics.  That session occurred on Friday morning and featured a panel discussion with former Maryland Lieutenant Governor Kathleen Kennedy Townsend (the oldest daughter of Robert F. Kennedy); former mayor of Boston and ambassador to the Vatican Ray Flynn; and former Massachusetts House Speaker David Bartley; all moderated by UMass Lowell Chancellor Marty Meehan.  They were all terrific speakers – which is one of the many reasons they were all so successful in politics – and each shared a handful of fascinating stories from their political careers, but what I found most interesting was the things each had to say about politics today.  Below are my notes.  They’re not a stenographic transcript but they accurately capture most of what was said. 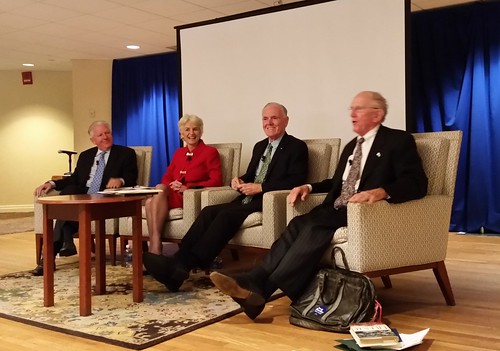 When Marty Meehan asked the panel if confronting injustice was part of the nature of Irish-Americans, Ray Flynn said:

We understand the roots of prejudice, especially against immigrants and poor people.  You can change all the laws you want but laws don’t change people’s hearts.  My message as mayor was inclusion.  This is shortly after busing.  Nothing works if people are divided.  If they don’t feel respected and safe, nothing works.

Kathleen Kennedy Townsend said too few people acknowledge the role of luck in people’s lives.  Here she was referring to the views held by many that being poor is a lifestyle choice or a consequence of laziness.  She said few who are poor share that opinion.  She said President Kennedy understood the importance of luck and illustrated that belief by sharing a story.  Late into his too short presidency, JFK traveled to Europe for some major events including his famous “Ich bin ein Berliner” speech.  On the way home, he stopped in Ireland and visited the village where his grandfather had been born.  Speaking to the assembled work force at a factory in the town he said “If your grandfather had gone to America instead of mine, one of you would be standing here as President of the United States and I would be standing amidst the rest of you as a fellow factory worker.”

Townsend then gave a refreshingly frank prescription for improving politics today: bring back patronage.  Here is what she said:

If you get rid of patronage, the only way people can get involved in a campaign is with money.  There’s no way for the poor to get involved in politics.  Who is going to help the little people when it’s the big people who want tax breaks and subsidies who are able to demand the attention of the politicians because of their financial support.  The campaign contributors are the ones who get the benefits.  The notion that education is the answer to all of society’s problems, that if we somehow better educate our young people, inequality will disappear, that’s just wrong.  We should focus on fairness in the workforce.  That’s what is needed to have a strong, just nation.

We’ve got to get people mobilized in politics again.  When you don’t have average people participating, you turn power over to the people with money who control the media.  The real power in America is with the people, but if they don’t get involved, that power can’t be exercised.

Most people think politics is dirty.  In Maryland, we instituted a Community Service requirement for high school students.  It could be fulfilled by working on a political campaign.  That was an attempt to get young people more involved in politics.  I’d like to see that done more.  Politics is an honorable profession but Republicans have created the impression that politics is bad.  The media has aided in creating this perception.  As a parent, why would you encourage your child to get involved in a dirty profession.  We have to change that perception in order to get more people involved.

Marty Meehan closed the session by recounting his efforts at Campaign Finance Reform.  The early bills were upheld by the US Supreme Court by 5-4 votes with Sandra Day O’Connor as the swing vote in favor of reform.  When she left the court, however, her replacement voted the other way and only then were campaign finance reform laws deemed to be unconstitutional.  Meehan’s point: Who is President matters a lot (because the President appoints Supreme Court Justices).

Yes, elections do have consequences.

The state election is just 37 days away.  That may seem like a long time but in politics, the most valuable commodity is time, more valuable than money even, and for campaigns, time is growing short.  While the governor’s race between Martha Coakley and Charlie Baker is gaining the most media attention, I live right smack in the middle of the 18th Middlesex State Representative District which is the scene of a fascinating campaign which pits Democratic nominee Rady Mom against unenrolled candidate Fred Bahou. 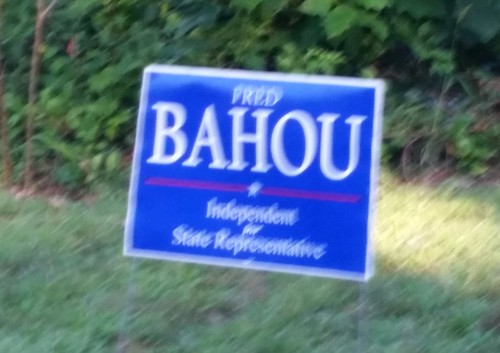 Friday night I attended the Open House of the newly relocated headquarters of the Cambodian Mutual Assistance Association on School Street, just across from the School Street cemetery.  To get there from my house I followed a zig zag route through the Highlands.  I was very impressed with the number of BAHOU signs I saw along the way.  From early morning walks in my own upper-Highlands neighborhood (Ward 8, Precinct 3), I already knew Fred had a lot of signs out.  In fact, almost every house that had a LEARY or DONOVAN (Jim Leary and Brian Donovan, two who lost to Mom in the primary), have now sprouted a BAHOU sign.  But based on signs, Fred’s support isn’t limited to this one neighborhood: he has a strong visible presence in the Lower Highlands and the Acre, as well. Fred was also at the CMAA open house where he worked the crowd and signaled that he wasn’t conceding any group of voters to Mom. 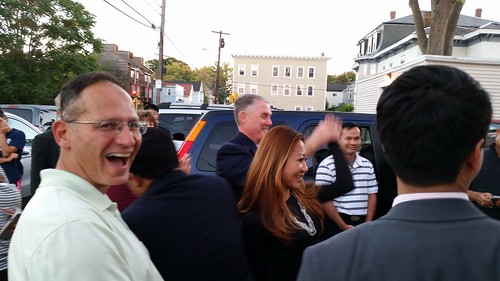 I also had two encounters with Rady Mom this week.  On Thursday after dinner, he rang my doorbell while going door-to-door on my street.  Then last night I attended his fundraiser at the Sompao Meas Restaurant at 450 Chelmsford Street.  This is a huge venue located in the same complex that used to house the Registry of Motor Vehicles.  It’s more like a wedding hall than a restaurant and it was packed last night with supporters of Rady.  Of particular note was the presence of Paul Ratha Yem who sought the Democratic nomination for this same seat with a sticker campaign.  Also present were former city councilors Rithy Uong and Vesna Nuon who had both supported Yem in the primary.  Both Rithy and Vesna addressed the crowd in passionate terms, calling for a united effort to get Rady Mom elected as the first Cambodian-American state representative in the country.  Also in the crowd were former city councilors Matt Donahue and George Ramirez, and Mayor Rodney Elliott extended the greetings of the city and exhorted everyone to get and to stay involved in the political process. 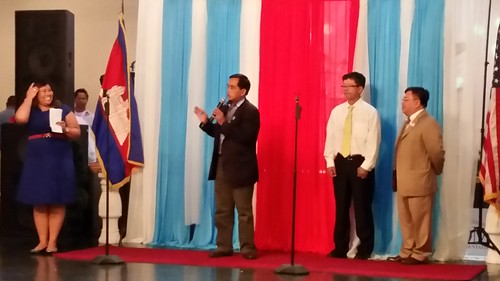 The reason I find this race so fascinating is that there’s no telling how it will turn out.  Both candidates and their campaigns are working hard.  It’s clear both have strategies that they’re pursuing.  Although Bahou is unenrolled and Mom is a Democrat, I suspect that they differ very little on the issues so this election will be decided more on tactics and execution than on ideology.  Because it’s a relatively small district – just one-third of the city of Lowell – a handful of votes can make a big difference.  Whichever candidate finds that handful of votes and gets the voters who will cast them to the polls on November 4 will win this election. 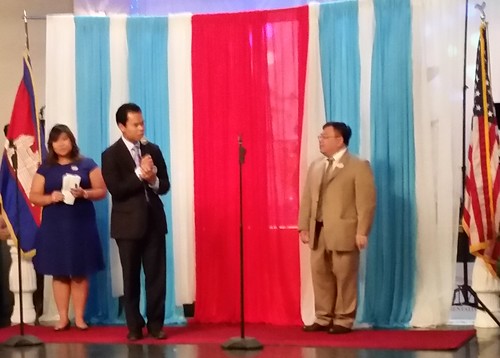 The Lowell City Council met last Tuesday night and for a summer schedule session (i.e., ever two weeks), it was a light agenda and a quick meeting.  I watched the meeting in its entirety and posted my notes with a full account of what transpired.  Perhaps most noteworthy was the appearance of former Mayor and City Councilor Bud Caulfield who addressed his former colleagues on the issue of crime and violence in the city.  Caulfield’s home had recently been broken into.  Short of an extreme crime of violence, I can think of no more intrusive experience than suffering a house break.  Under those circumstances, I thought Bud was remarkably restrained and he also suggested a couple of good ideas.

To me, the highlight of the meeting was Councilor Rita Mercier’s thoughtful remarks on the causes of crime in Lowell.  I wrote a separate post praising her for getting it right, so please read it if you haven’t already done so.  Too often during the tenure of this council, the understandable anger and frustration that is the result of criminal activity in the city has elicited simple-minded outbursts from the council floor, rhetoric that sounds great on talk radio but that ignores the complexity of the problem.  Without acknowledging that complexity, we’ll never have a chance of gaining control of the situation.  Rita is uniquely positioned because of her stature in the community to lead on this issue in an effective way.  She did that Tuesday night.  Hopefully, she’ll continue, and hopefully she’ll pick up some allies along the way.

One Response to Lowell Week in Review: September 28, 2014