Yesterday afternoon’s tornado warning was the fourth of the summer.  I don’t remember that many warnings in the previous 40 years.  Is the weather getting worse or is weather radar and the ability to quickly report its results just getting better.  While the tornado threat faded, a serious thunderstorm passed through the city around dinnertime.  Here in the Highlands we were only grazed by the heavy stuff but Councilor Dan Rourke on Twitter reported that it was pretty intense north of the Merrimack River and co-blogger Paul Marion noted a serious lighting strike close to his home near the South Common.  The structure hit by the lighting turned out to be the smokestack at the Thorndike Factory Outlet.  That building was constructed near the end of the 19th Century by Charles I. Hood as the largest patent medicine factory in the world.  The HOOD on the smokestack has nothing to do with milk and everything to do with sarsaparilla and vegetable pills.  Two years ago I wrote about Charles I Hood and his factory which is shown below.  I’m not sure there’s any legal requirement to repair the smokestack so it might soon disappear from the Lowell landscape. 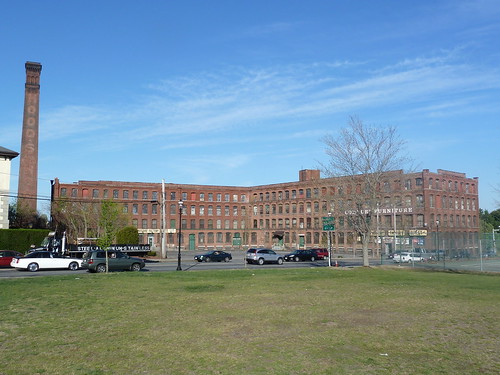 The implementation of two way traffic in downtown Lowell certainly went smoother than I expected.   I’ve quizzed a few people who work downtown and live elsewhere.  They cite a few choke points but praise the overall concept.  There has been a greater volume of complaints about traffic since school started but I think that’s the case across the city.  Last Thursday night when I left my home in the Highlands bound for University Crossing and the state rep candidate debate I headed down Pine Street, intending to turn right on Princeton Blvd and left on Webber to reach Pawtucket Street.  I couldn’t get off Pine.  The traffic heading west on Princeton Blvd heading for the Rourke Bridge was backed up beyond Pine Street.  That backup certainly had nothing to do with downtown traffic patterns.  Once I broke free there I took and alternate route that weaved through the Highlands and Acre and got me to University Crossing in 12 minutes which is about the time it would take to get there at 7am on Sunday.  My lesson was that when it comes to getting around the city, people tend to pile up on certain roads on a familiar route and don’t take advantage of alternate paths.  I suspect that’s partly to blame for downtown jams.  Hopefully as people break out of driving habits of 50 years and take advantage of new routes the traffic will ease a bit.

What a magnificent building!  I spent most of the night in the debate room, Moloney Hall (as in Executive Vice Chancellor Jacqueline and Attorney Edward Moloney whose generosity helped construct that particular room).  I did get a quick look at the interior which has a large atrium at the entrance along with the UMass Lowell bookstore, a coffee shop, a fast food restaurant and many other amenities.  I can’t wait to get back and spend some more time there.  UMass Lowell has been clear that the community is welcome to take advantage of the University Crossing facilities which will be visited by Senator Elizabeth Warren on September 16 and by Piper Kerman (author of “Orange is the New Black”) on September 19.  Both events are free and open to the public.  Check out the UMass Lowell University Crossing webpage for information about these and other events. 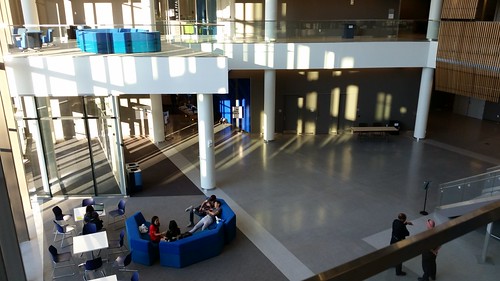 As I mentioned, my first trip to University Crossing was to see the candidates for the 18th Middlesex Representative seat debate.  With the primary election only 48 hours away, it’s time for voters to make up their minds about who to vote for in the Democratic Primary.  The choices are Brian Donovan, Jim Leary, Rady Mom and Dave Ouellette.  Paul Ratha Yem is also running as a write-in or sticker candidate in the Democratic Primary. 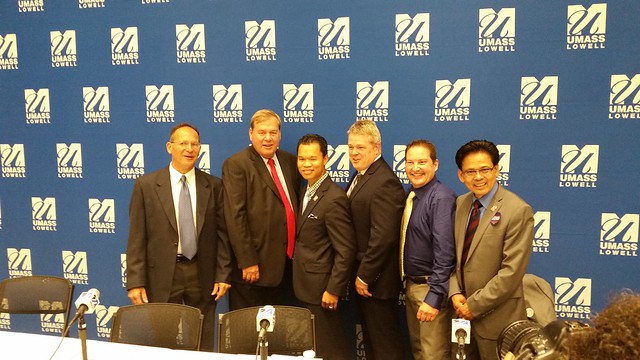 I’ve done two blog posts from each of the debates.  If you’re a voter in this district you might want to skim through them before heading to the polls.  Here are links to the posts:

Notes from the September 4, 2014 debate.  In this post, I tried to capture the gist of every answer given by the candidates to every question asked at the debate.  It’s not a stenographic transcript but it give you a good idea of how each question was answered.

Observations on the Sept 4 debate.  This gives some background info on the debate with pictures

Notes from the August 19, 2014 debate.  I was the moderator of this debate so a few days afterwards I watched the full video replay and took extensive notes.  Again not a verbatim transcript but a pretty good account of what each candidate had to say.

Observations on the Aug 19 debate.  This post provides some photos, an explanation of the debate format and a link to the full video on the LTC website.

I live in the 18th Middlesex District and have known all of the candidates for quite some time.  I’m having a hard time making up my mind who to vote for.  In the two debates, I’ve heard some wise responses but also some that were off the mark; and that was often from the same candidate.  History tells us that the person who wins this election and the one in November (when the Democratic nominee will face unenrolled candidate Fred Bahou) will hold the seat for a long time.  Speaking of history, please check out my blog post on Lowell in the Legislature, an account of all who have held state rep seats in Lowell from 1974 until the present.

While I’ve yet to make up my mind about who to vote for in the state rep race, I do know how I’ll be voting in the contested statewide races in Tuesday’s Democratic Primary.

Martha Coakley for Governor – I first met Martha Coakley in the late 1980s.  She was a new assistant district attorney assigned to the Lowell District Court and I was a new lawyer defending accused criminals.  Through the years we had a number of cases together.  She was a tough opponent mostly because she was smart and extremely well prepared.  But she was always fair.  Since those days I’ve followed her career.  I liked what she did as Middlesex County District Attorney and as Attorney General.  I think Martha Coakley will make an outstanding governor.

Maura Healey for Attorney General – At the height of the foreclosure crisis when abandoned properties were wreaking havoc in neighborhoods in Lowell and other gateway cities, I and my fellow registers of deeds reached out to the Attorney General’s office to offer assistance to their efforts to mitigate this disaster.  The point person in the AG’s office was Maura Healey who was a top deputy to Martha Coakley.  I know from personal experience that Maura Healey’s involvement made a tough situation in Lowell a lot better.  When she decided to run I looked closer at her background in the AG’s office and before and really was impressed.  Back in February I wrote a blog post about her.  Please take a moment to read it.  Maura Healey will be a great Attorney General.

Barry Finegold for Treasurer – We in Lowell have been fortunate to have Barry Finegold representing a neighboring district in the Massachusetts State Senate (he represents Lawrence, Andover, Tewksbury and Dracut).  While we’ve had great representation from Steve Panagiotakos and Eileen Donoghue, it’s always good to have allies and Barry has certainly been that.  He spends a lot of time thinking about the big picture on important issues, but he doesn’t neglect the details so important to an elected representative.  His skills and demonstrated ability to master complex issues will make him a great State Treasurer.

It’s fall and so my Lowell Cemetery tours are set to resume.  They all start at the Knapp Avenue entrance right next to Shedd Park, are free and last about 90 minutes.  I’ve added quite a few new stories to the tour so even if you’ve done it before, please join us again.  Here are the dates and times: