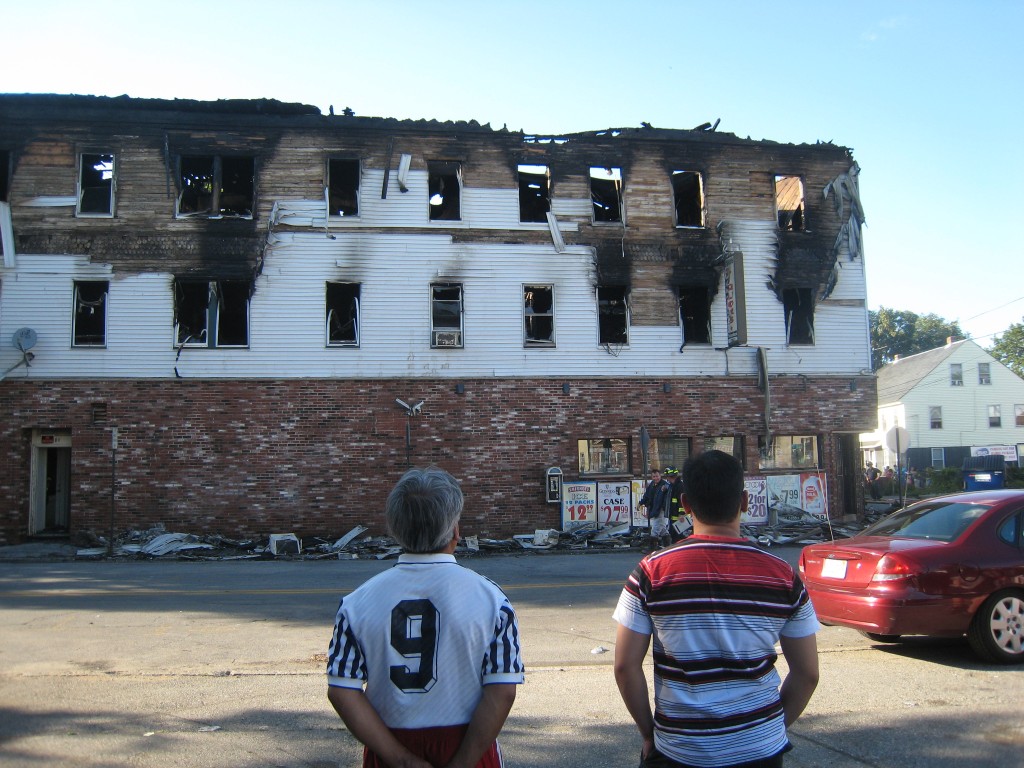 Whatever it was that seemed important in Lowell politics on Wednesday night faded to obscurity on Thursday as news of the tragic fire at 77 Branch Street rapidly spread. I suspect we all have some primal fear of waking in the middle of the night in a smoke filled room and struggling to escape. At that level, at least, we find some kinship with all who perished in the blaze. And anytime a child dies is heart wrenching so this was triply so. Now it’s important to mourn, to aid the survivors, and to be patient until investigators announce their findings as to the cause and contributing factors.

Deadly fires present an opportunity to strengthen fire safety laws where necessary. That’s what happened after tragic fires at the Triangle Shirt Waist factory in New York City, at the Cocoanut Grove in Boston, at the Station nightclub in Rhode Island, and at Providence College where, in December 1977, ten students perished in a late night dormitory fire. Safety is always a trade off. If there had been no fire and someone had proposed mandating the installation of sprinklers in all residential structures with more than a certain number of units, there would be howls of outrage at the cost. But is it realistic to simply say that we cannot place a cost on safety? There’s no way to tell if sprinklers would have reduced the loss of life in this case and requiring their installation would be an enormous expense that would drive up rents that are already unaffordable to so many in this city. The question of safety versus cost is debate that should constantly be revisited and recalculated. In the aftermath of a fire such as this, that’s the kind of conversation this community should have. 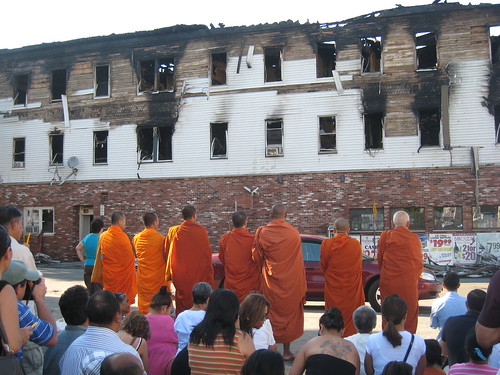 Prayer vigil for victims of fire

There’s also been talk that has leaked into the public arena about living arrangements and the overall number of people residing in that building. Those living at 77 Branch Street are just as representative of the typical Lowell resident as are those who live on half acre lots in neighborhoods on the city’s periphery. If you get out of your car and walk through neighborhoods in the Acre, the lower Highlands, and lower Centralville, big old wooden buildings predominate. Many of their inhabitants face a day-to-day struggle to maintain a place to live for themselves and their families. The best way to help these families long term is to grow an economy that provides plenty of jobs that pay well and the training individuals need to obtain such jobs. That’s easier said than done but in the meantime we are obligated at a minimum to provide safe, secure and affordable housing to our fellow citizens to minimize the chances that another tragedy like this will ever again strike our city.

Before the fire the big issue locally was crime and violence and how to prevent them. As we regrettably see from Thursday night’s stabbing death on Woburn Street, crime and violence will resume center stage in the city by the time the cranes begin demolishing the remains of 77 Branch Street. Coincidentally, the prescription for reducing violence and crime isn’t all that different from what’s needed to prevent a recurrence of Thursday’s tragic fire. I agree that illegal fireworks, unsupervised kids out at night, and less than the optimum number of police officers all contribute to crime and violence, but addressing those things is simply treating symptoms and does not attack the underlying causes of the problem.

If you believe, as I do, that the prime perpetrators of today’s violence in Lowell are older (i.e., 20 & 30 somethings as opposed to teenagers) individuals who have already served prison sentences, you understand that threatening to send them to jail isn’t much of a deterrent. It might make the law-abiding citizen who demands harsher sentencing feel better, but it will have zero effect on curbing crime. People might not want to hear it, but the best way to reduce crime in Lowell is to do a better job of integrating already-convicted criminals back into the community when they wrap up their sentences with better job training, job placement, housing and nearly round the clock supervision by parole and probation officers. Without all of that stuff, it’s predictable that these guys will return to crime because that’s the only strategy they see for surviving on the streets.

A main contributor to our violence is the local drug trade which is mostly heroin. Pretty much everyone accepts that one of the root causes of heroin addiction is gateway addiction to prescription painkillers. A $5 bag of heroin is a cheaper and more available alternative to a much more expensive Oxycontin tablet. That’s one reason why this coming Wednesday’s “unwanted medication disposal day” by the Lowell Health Department is so important.  Take some time to scrutinize your medicine cabinet and get rid of everything that’s expired or unneeded . . . no point in letting it hang around the house.

In other city news, the report at Tuesday’s council meeting on the old Butler School property was interesting. Steve Joncas, representing the developer, reported that two retail buildings will soon be constructed on the site, one on either side of a new road that will bisect the parcel and connect Newhall Street in the rear with Gorham Street in the front.  This new road may take on some outsized importance depending on the ultimate disposition of the old Prince Spaghetti property that’s located on Newhall Street. The foreclosure auction of that property took place a couple of weeks ago but the foreclosure deed has yet to be recorded so we don’t know who the true owner will be. 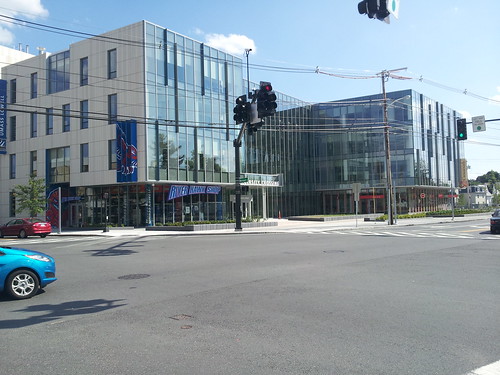 Also at Tuesday’s meeting the council ratified an agreement by which the city will rent 125 curbside parking spaces along Fr. Morissette Blvd to UMass Lowell. The University will use this parking for employees who work in the new University Crossing building (above) which is rapidly approaching completion on the site of the former St. Joseph’s Hospital. I was in that area today and decided to park and take a closer look at the University Crossing building. It looks great and also like it will be ready for its mid-September grand opening. As a bonus, I spotted a nice new park located on what used to be the southerly approach onto the Textile Bridge (below). The bridge is gone now, of course, but the ramp onto it now serves as a scenic overlook of the river. Equipped with four benches set on a cobblestoned patio, this will be a great place to sit and relax while in that area. For now, I’ll call it the Moody Street Overlook although I recall that one end of the former bridge was to be dedicated to Jack Kerouac who featured the bridge in many of his books and the other end to the UMass Lowell students and graduates who died during World War Two for whom the Textile Avenue Bridge had been dedicated after the war. 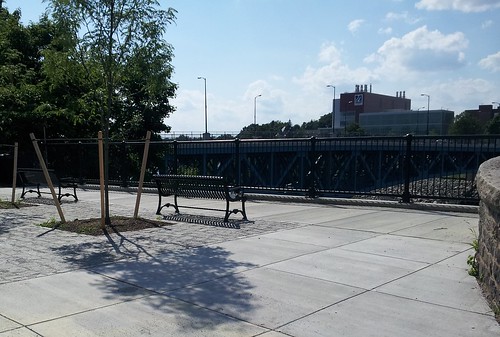