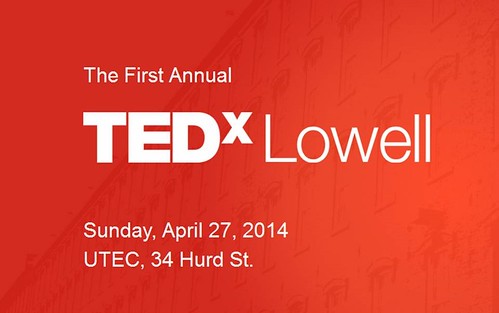 TED started in 1984 as a conference that each year brought people from Technology, Entertainment and Design together for short lectures (no more than 18 minutes) on their favorite topics. The talks were videotaped and made available for free on YouTube. That quickly made TED a global phenomenon.

TED’s motto is “Ideas worth spreading” so in that spirit, TEDx was created with the “x” symbolizing an local, independently organized TED event.
The first ever TEDx Lowell will be held this Sunday, April 27, 2014 at UTEC which is at 34 Hurd Street, right between the UMass Lowell Inn & Conference Center and the Lowell District Court. There are a total of 19 speakers in two sessions (with me being one of them). The first runs from 1 pm until 4:30 pm; the second from 5:30 pm until 9 pm. For more information and to purchase tickets, visit the TEDx Lowell website.

Here’s a list of the speakers and topics for the first session which begins at 1pm:

Alexander Martinez-Forte, Gregory Bohenko, and Aaron Stafford – Owners of Redestar Group and UMass Lowell Students
“Be a Giraffe: Head in the Clouds, Feet on the Ground”

Dan Kennedy – Northeastern Professor, Panelist on “Beat the Press”
“Telling the Local Story: The Fate of Community Journalism in a Time of Cultural Upheaval”

Speakers and topics for the second session which begins at 5:30 pm:

Abby Fichtner – Hacker in Residence, Harvard Innovation Lab
“Do One Thing Every Day That Scares You”