Last week I purposely avoided any mention of Mayor Murphy’s portrait for several reasons. Like the Nativity Scene controversy and to a lesser extent, the controversy over board appointments, I considered it a diversionary tactic used by some to draw attention away from important matter such as the process for selecting a new leadership team at city hall and the overall discussion of public safety. Former School Committee member Alison Laraba felt the same way for she addressed the city council about this very issue at its Tuesday night meeting. I posted Alison’s full remarks but here is the main point she made:

It is time for this council to . . . stop the pettiness and vindictive rhetoric and get to work-you have a city manager to hire-hopefully a professional one not a political one, a city auditor to hire, a budget to approve, taxes to hold down, and public safety issues to address-people have been shot-I know of at least one home that was invaded in broad daylight and this council has been quiet on that front. These are the issues that affect all the residents of Lowell and it is past time for this body to get to work on the business of the people.

The issue of the portrait did come up at the meeting because Councilor Mercier filed a motion to establish “guidelines” for future mayoral portraits. After some discussion, including comments by Mercier that made it abundantly clear that her actions have more to do with her lingering animosity for Patrick Murphy than with history or art, the motion was referred to the council rules committee.

Former Mayor Murphy responded to the council by letter which he allowed me to post on Wednesday. Be sure to read the full letter but here’s the gist of it:

I suppose that it should come as no surprise that what I perceive as forward progress is deemed to be backward by the likes of the paper and its political favorites. I had sought to do a lot of things differently, and that has been difficult for some to accept. If a portrait of me is to be displayed, this is how I would want it: outdoors, in the streets, walking in the community, where the work gets done, with the people who joined me in the journey and kept me going with the work that I loved, in the midst of the neighborhood where my family had first come to live in Lowell.

Also at the council meeting, Corey Belanger criticized Middlesex Community College for a lack of progress at the Rialto Building. Belanger, who is chair of the council’s economic development committee, was similarly critical of Trinity Financial for the pace of development in the Hamilton Canal District at a previous meeting. I transcribed Belanger’s full remarks on the Rialto Building in my post on the city council meeting. 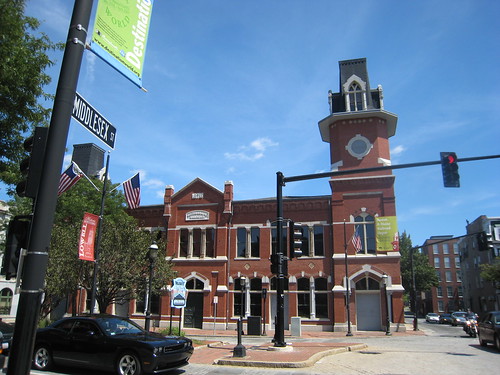 My council meeting notes were a day late because on Tuesday night I was at UMass Lowell’s O’Leary Library leading a discussion on Lowell history for the 30 or so people who ventured out on that cold night. I’ll be late with my notes again this week since on Tuesday, February 4, 2014 I’ll be attending a house party for Maura Healey, a candidate for Attorney General, at the home of Nancy and Richard Pitkin at 26 Waverly Ave in Lowell. It goes from 7 pm until 8:30 pm and anyone who would like to meet the candidate is invited. Although I’ll be late posting my own notes, I’ve found an able substitute who has kindly agreed to take notes in real time that we’ll be able to post later Tuesday night.

I will be home on Monday night to watch the special council meeting that’s been called for 5 pm to discuss (and perhaps select?) a temporary manager to hold the office from the day after Bernie Lynch leaves on March 10 until the new city manager is hired.

One motion of note from last week’s council meeting was by Mayor Elliott that requested City Manager Lynch to refrain from making any board or commission appointments for the rest of his tenure here. Lynch pre-empted any serious discussion of this topic by volunteering that he did not intend to make any such appointments unless there was some dire emergency.

The calm tenor of this discussion was the complete opposite of the heated rhetoric from the previous week when Lynch brought forward appointees to the Library Trustees, the Planning Board and the Board of Appeals. At that meeting the council ratified the Planning and Zoning Appointments but tabled the Library Trustee who happened to be Salmira Mitchell, the spouse of blogger Jack Mitchell. The major topic of my Week in Review post last Sunday was that the councilors behind the shabby treatment of Salmira were “vindictive bullies” who punished her because of harsh blog posts about them by her husband Jack.

The appointment of Salmira Mitchell will come up again this week. The council agenda indicates that Dan Rourke will move to have the matter “taken from the table” so that it can be voted upon. Also on Tuesday night the council will vote on the new anti-panhandling ordinance after holding a public hearing. I expect that a number of people will speak passionately against the proposed ordinance, however, I also expect it to be enacted by the city council by a comfortable margin.

This past Friday, the Khmer Post USA, the city’s Cambodian language newspaper, held its first “Press Club” at the Tepida Khmer Restaurant on Chelmsford Street. The publishers of the paper, Roger and Soben Pin, originated this event in Philadelphia where they previously published. Press Club brings together members of the Cambodian community and local officials to discuss issues of concern to the community over lunch. Friday’s meeting was attended by City Manager Lynch, Mayor Elliott, Councilors Mercier and Belanger, School Committee member Dave Conway and Police Superintendent Bill Taylor. Before any of them got to speak, they heard from several members of the Cambodian community who were frank in their criticisms of some aspects of city government. I took lots of notes and did a full post about the event.

Around the Lowell blogosphere, Lynne on Left in Lowell has several posts about this past week’s council meeting including one on Grand Manor Condominium which was built on contaminated land that was previously owned by the city. She has another on the mayoral portrait issue. Lynne includes video clips of key portions of the meeting that are well worth watching.

On Lowell Live Feed, Jack Mitchell writes about the mayor’s portrait, Kendall Wallace’s Saturday column (which Jack takes to be a pitch for Eileen Donoghue to be the next city manager) and about the process of making public the minutes of executive sessions.

Chris on Learning Lowell has two important posts this week. The first covers the “book solution” for hiring a city manager. The other is a two parter on homelessness in Lowell and what to do about it.

Bernie Lynch writing on the City Manager’s blog shared a letter from former CFO Tom Moses to his former colleagues here in Lowell. Please read the full letter, but here’s a sample of what Tom wrote:

While at the MMA conference this Friday and Saturday, I was struck by the recognition throughout our profession of Lowell’s transformation. Recognition came from management, vendors and elected officials alike. I was humbled by the attention and proud to have been a part of this extraordinary run. It also struck me that the overwhelming sentiment of those who understand the fragility of local governments was of concern for Lowell.

Just to be clear, let’s repeat that last sentence: “It also struck me that the overwhelming sentiment of those who understand the fragility of local governments was of concern for Lowell.”