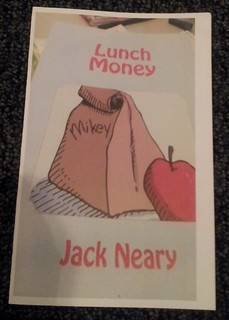 Last night the students of the Lowell High Theatre Troupe took over the Little Theatre to perform three short plays by Lowell’s own Jack Neary before a packed house. The first play, “Talk Back”, featured the director of a play in a post performance question and answer session with the audience being overwhelmed by the inane questions of the audience members. It was very funny and very real as Jack (who was in attendance) confirmed during intermission.

The second play, “Lilacs”, featured two young people in Lowell in 1922. One was named Armand, the other Ruth. This show was poignant and thought provoking. Armand planned to become a priest and Ruth an actress. His last name was Morissette and hers was Davis. She said when she got to Hollywood she intended to be known by her middle name which was Bette.

The third play which was the longest and funniest was called “Lunch Money.” It depicted a high school class doing a mock trial regarding the alleged theft of lunch money by the class bully from the locker of the quiet kid. This one was hilarious both because of the superb writing and the excellent acting. Given my prior career as a trial attorney, I found it particularly amusing and insightful as the kids innocently challenged some of the fundamental tenants of our justice system. 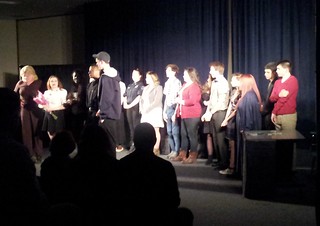 While this show only ran one night, thanks to Jack’s generosity, students from the TV studio recorded the performance so hopefully it will soon be available on Lowell cable’s channel 22. Also, the talented students at Lowell High will be performing the musical Hairspray in the spring. We’ll be sure to publicize the date once it’s announced.

One Response to “Lunch Money” at Lowell High