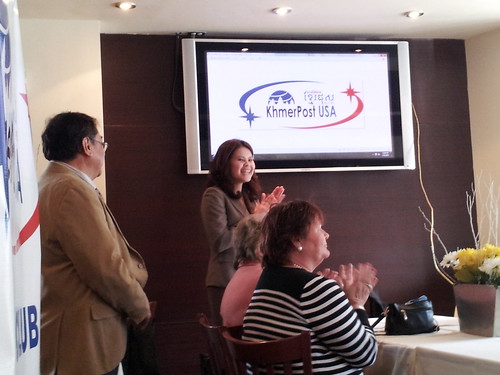 Roger and Soben Pin formerly published the Khmer Post newspaper in Philadelphia before moving to Lowell more than a year ago. In Philadelphia, they routinely held gatherings where members of the city’s Cambodian community and public officials could come together and discuss the issues of concern to the community. Roger and Soben have now brought that practice to Lowell, hosting the first Khmer Post USA Press Club yesterday (January 31, 2014) at the Tepthida Khmer Restaurant on Chelmsford Street. A buffet lunch was served and then members of the local Cambodian community and city officials spoke.

The first community speaker was Bopha Malone who is the chair of the Cambodian Mutual Assistance Association. She explained that CMAA has been in operation for 30 years now and it no longer is dealing with refugees. The two big issues now are care of elders and activities for youth. CMAA is excited about moving to its new site on School Street but is still waiting for the proper permits from the city.

The second community speaker was Sengly Kong who is the chair of the Cambodia Town committee. He opened by quoting former Secretary of State Colin Powell who said “everyone can become great if given the opportunity.” Sengly said that the committee wants to have the opportunity to make Cambodia Town great. He said the Cambodia Town area needs more lights, wider sidewalks and public art that represents the core cultural values of Cambodia, especially from the 12th and 13th centuries. He said there are 240 Southeast Asian run businesses in Lowell. They employ 5000 workers and serve the 35,000 Southeast Asian residents of Lowell. 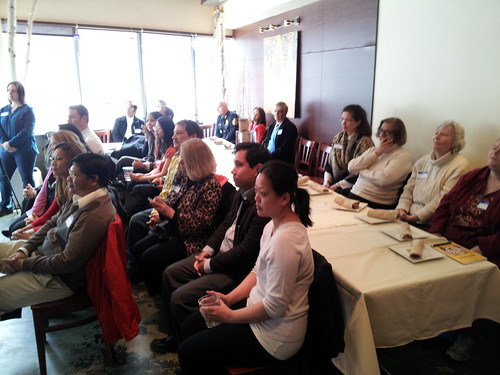 The third community speaker was Adam Pril, owner of One World Pharmacy on Highland Ave. He said he doesn’t get involved in politics but he encountered “many problems” opening his business in Lowell. He went to the city’s website for guidance but didn’t find any. He has another business in Pepperell and had a very different experience. Government in Pepperell is very “transparent” with elected officials promptly answering emails. He says he has been in Lowell for 30 years but has never been to a gathering like this. He thought it was very valuable. He wants to know more about the city councilors, especially how to contact them. They are around at election time and then disappear right afterwards. “If Pepperell can do it, Lowell can do it too.”

City Manager Bernie Lynch was the first city official to speak. He said looking back on his seven plus years as city manager he believed the stability of the city’s finances and long term investments have made Lowell a better place. He’s also proud of the efforts to reach into neighborhoods and ethnic groups. He tells Adam that plenty of people do call city councilors because they then call him. Lynch said he’s proud of the relationship the city has developed and maintained with the Cambodian community. The idea of Cambodia town came out of the city working with the neighborhood. But much more needs to be done. City Government should be more inviting. He has appointed to boards and commissions neighborhood people, women and Cambodians. Still, everyone in the Cambodian community must step forward and get involved by voting, serving in appointed positions and running for office.

Police Superintendent Bill Taylor spoke next. He said that he’s been a Lowell Police officer for 32 years and was happy to report that in the past two years the department has hired four Southeast Asian officers. He said it’s important for the police department to reflect the community. In the near future, he’ll be announcing a restructuring of the police department that better emphasizes community policing with more officers on foot, on bikes and in the downtown, on Segway scooters. A lot of community policing involves the application of common sense in finding ways to better connect the officers to the community. He also said that his new leadership team will have the investigative units in the department focus more on the connections between drugs and gangs.

Rita Mercier spoke next. She said this type of meeting represents “Democracy at its best.” She’s been on the city council for 19 years and enjoys what she does “because I love people.” She said she was a messenger who brings the concerns of residents to City Hall. She said the city is rich in ethnic diversity with many good partnerships. She said he used to live in this lower Highlands neighborhood for 30 years and spent five years working in the very building in which the restaurant was located. Back then, it was Price’s bakery. Rita took credit for convincing Soben and Roger to move their newspaper from Philadelphia to Lowell and for Top Donut expanding into Lowell rather than Haverhill.
Mayor Rodney Elliott spoke next, saying that the City Manager and Rita Mercier had “said it all.” He said to the audience “we are here for you” and that “we want to help new businesses.” He commended the valuable service the Khmer Post provides to the community and said he recognized the importance of the paper during the election by advertising in it.

City Councilor Corey Belanger also spoke. He said he may be a new councilor but that he’s been a business owner in Lowell for twelve years and as such understands the everyday struggles of small businesses very well. He said as head of the economic development subcommittee, his priority will be establishing good communications between businesses and developers and City Hall.

Next, a woman who works as a real estate broker whose clients are mainly Cambodian and African said that many of them want to leave Lowell because of concerns they have about the public schools. School Committee member Dave Conway responded to her saying that safety is a priority which is why he made a motion to have a School Resource (Police) Officer placed in every middle school. He said “you can have the best curriculum in the world but if you don’t have safety you’re not going to have a lot of learning going on.” He then mentioned a motion he made to hire a grant writer which was done largely with private funds and closed by sharing a story about a recent experience he had with the new access security system in place at Lowell High. He entered the building through a “back door” but the security guard controlling access would not let him pass until he produced his driver’s license and received an official visitor pass. He said that rather been being upset by being barred from the building despite being a member of the school committee, he went right to the Headmaster’s office and commended the guard for being so diligent.

With that the event came to a close. As I said, it was a wonderful opportunity for members of the Cambodian community to meet with city officials in a relaxed social setting while at the same time engaging in serious policy discussions. The Khmer Post hopes to make Press Club a regular event in the city.