Geoff Foster of UTEC, who’s coordinating the local effort to lower the voting age in Lowell’s city election to 17 years old, sent the following update on the bill’s progress: 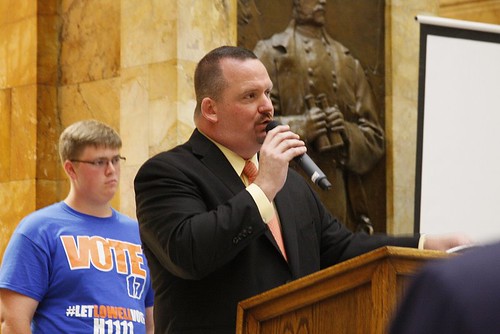 On January 16, 2014, under the leadership of Senator Eileen Donoghue, the Massachusetts State Senate voted 30-7 to add the Vote 17 effort as an amendment to the Senate’s election reform bill. The amendment allows for a referendum to be placed on Lowell’s upcoming ballot which, if passed by voters in Lowell, would allow 17 year olds to vote in Lowell’s municipal elections. This effort was launched by youth organizers from the United Teen Equality Center in 2009 and was most recently supported 9-0 by Lowell’s City Council.

The Senate bill was later passed by a vote of 37-1 advancing Lowell youth’s efforts to a Conference Committee where the Senate’s election reform package will compete with a House version passed in November of 2013 which did not include the Lowell youth’s effort. If included by the Conference Committee in its final version, the Governor (who has previously expressed support) is expected to sign the effort into law.

Last Monday, the Conference committee was named: Senator Barry Finegold, Senator Sal DiDomenico, and Senator Bob Hedlund alongside Representative Michael Moran, Representative James Murphy, and Representative Paul Frost. The UTEC organizers are optimistic that this conference committee could include Vote 17 in its final version due to Senator Finegold and Representative Moran both being public supporters of the effort (both spoke at a State House rally on the effort in 2012 vowing to get Vote 17 passed the legislature). If passed by the legislature, the matter would appear on the 2015 Lowell municipal ballot as a binding question.

UTEC will be hosting a celebration of the Senate passage on Tuesday February 11th at their center on Hurd St. beginning at 6pm. Senator Donoghue will be attending to address the youth who refuse to give up. Lowell Representatives Kevin Murphy, David Nangle and Tom Golden have all previously supported the effort. This is the furthest any effort of its kind has reached in the state legislative process.

Lowell residents interested in supporting the effort are asked to call members of the conference committee including Representative Moran at 617-722-2014 and ask that they please keep Vote 17 in the conference committee’s final election reform bill. UTEC youth are supported by national researchers who agree that Lowell is the ideal place to pilot a lowered voting age as it would increase voter turnout, create lifelong civic habits and increase youth participation in civic matters.

[Photo is of Representative Michael Moran (D-Brighton), Senior Ranking House Member on the Conference Committee to finalize the Election Reform Bill – Speaking at the Vote 17 State House Rally in June 2012]