I’m transcribing the discussion at tonight’s Lowell City Council meeting and the first hour was taken up by a motion to restore the city’s manger (i.e., nativity scene) to city hall. It was an interesting discussion so I decided to post it separately here. Be sure to read all the way to the end to catch the City Solicitor’s comments: 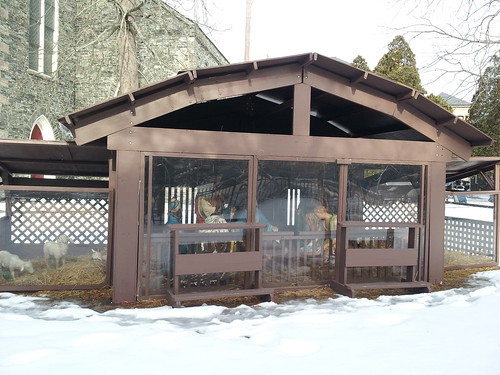 Council suspends the rules to take two motions out of order:

Council support placing manger at JFK Plaza & CM find ways and means to allow residents to donate to a fund to renovate the manger scene:

George Koumentzelis speaks: “I’m here at the request of Council Mercier. I expressed my concerns to her yesterday and she urged me to come here and speak about it. I support both of the motions. As a child my family came to see it not as a religious experience but as a shared cultural experience. I believe that whoever it was that complained about the manger being at City Hall is on shaky ground. This is a precedent that people of this community be they Christian or atheist have all supported this in the past. Everyone thinks of that as a Christian diorama but legally speaking it is not a Christian manger. We live in an ethnic city. We are a microcosm of the United States. That manger is actually pre-Christian. If you look at the manger what do you see. You see a barn with animals. Pagans can relate to that. God wanted the Israelites to be at one with nature. God relinquished that because God is a soft-hearted liberal. This natural tradition goes back to the native Americans who worshiped nature. Then you have Mary, Joseph and Jesus. They weren’t Christians. In the Christian faith, you have to be married to have children. Were Mary and Joseph married? No. So Jesus Christ was an illegitimate child. To be Jewish your mother have to be Jewish. The three wise men were sorcerers who practiced magic. So to the person who complained about this as a Christian symbol, it’s not a Christian symbol. Everyone can related to it. This person offends me. They’re trying to compare apples to apples not pumpkins or grapes. They don’t have a faith. We shouldn’t hide away the manger. The manger should be moved back. I agree with Councilor Mercier. [Editor’s note: I’m not making any of this up].

Next speaker is a pastor, didn’t catch his name. Says his church is made up of 20+ nationalities. We support this motion. We should not fear this. We should have faith that the Father will protect us if we continue this tradition. All religions around the world respect the manger, even Muslims (he’s from Lebanon). Please consider prayerfully and faithfully to bring it back.

Christina Cavalho: The Lord is moving me and the Holy Spirit is moving me to speak about the manger. I was saddened when I noticed it gone until I saw it at the church. I thought it was funny that no one said anything about it in the Lowell Sun. It was only after Christmas when I read in the Lowell Sun that Rita Mercier was saddened by it. But that’s how we are in this country. Jesus is being pushed aside. This country was founded on Judeo-Christian values. If George Washington was alive today he’d be mortified. We don’t want to lose our Christianity. I don’t want to talk about politics but I’m here to fight for my savior. This is why Lowell is so unique. It wasn’t because of great men it was because Jesus found favor with us. I don’t make a lot of money; I’m on a fixed income; but I’ll be happy to contribute my money to support this renovation.

Rita Mercier: There are many reasons for this motion. When I filed it, it was before Christmas. It was about putting Christ back in Christmas, in finding the true meaning of Christmas. I thank St. Anne’s for housing it but why it ended up there is beyond me. If we are sued, it’s one lawsuit we should fight all the way. The Lowell Sun had a survey about this and 61% said it was “political correctness run amok.” I agree. It’s easy for people to trash God. No wonder we have so much trouble in society. It’s bizarre that one letter can crush the nativity scene. I don’t care what other people think. I want a roll call vote on this motion so I know who is with me on this. This is our custom. This is our right. If anyone else wants to join us and be over there like a Menorrah, I don’t object to that. This motion is to have my colleagues go on record in support of this. Mr. Manager, you told me a while ago that the manger would be put in a better, more central place. I had a hard time finding it. When I did, it was in total darkness. She offers to donate $100 for the renovation of the manger.

Corey Belanger: I wholeheartedly support this motion and thank the speakers for enlightening us. We’ve all been in the city and seen this display for many years. I always saw it as a celebration of Christmas. It belongs there. Let’s not forget that we had thousands of people who gather there for the city of lights parade. A concern that I have is that it experienced theft and vandalism. I don’t want the community to spend a lot of money on it unless there’s a way to make it more secure and safe that would be great.

Ed Kennedy: To the city manager: can you explain why the manger was moved? It was moved this year for the first time. We received complaints last year. We consulted case law and found that cities had been found liable for placing it on city property. This year we felt we were playing Russian roulette with a law suit so we thought a more appropriate place to display it would be at St. Anne’s, a historic church in the city. We thought it would be more visible for people who were walking through downtown. We know it needs repairs and better lighting. Kennedy: Was there a communication to the council about this? Lynch: No. Kennedy: Why did we change? Where did the complaints come from that caused us to move it? Lynch: In the locations where it has been upheld, it’s part of a much more comprehensive display with snowmen, igloos, a Menorah. This was just a standalone structure on city property. We did not simply say it can’t go up. We found a place for it that people could see it without it being on public land.

Kennedy: Was there a group that threatened to take us to court? Lynch: we got letters from several individuals. Kennedy: I have to think that there are communities where it has been allowed to stand by itself. This is a good motion and we should stay with it. If the law department thinks we need to be more careful about doing it we have time to react.

Milinazzo: I’ll support the motion and thank Councilor Mercier for bringing it up. If you recall about four years ago when we used to open our meetings with the Lord’s Prayer and representatives from everyone in the city approached us and asked us to change that. We did by working cooperatively. We should do the same thing with this to try to make it more representative of the city.

Samaras: I’m a traditionalist and I see its historic value. Perhaps this is the time to amend the motion to make it more inclusive so that every group is represented on the grounds of city hall. We are a nation that is very accepting and we should be a city that’s very accepting. Amends the motion to have the manager work with law department to come up with ways and means to accommodate other groups.

Mercier: I have no objection. We hear about separation of church and state. To me, that means the state can’t establish a religion. This is just celebrating a tradition. Every time we turn around, they’re taking God out of things. If you don’t want to mention God when you’re saluting your country, go to some other country. I’m tired of shaking in our boots any time someone complains about this.

Rourke: It’s a good motion. I’m going to support it. To the manager: Was an attempt made to reach out to other groups to make displays? Lynch: It was more to make a more secular display. we didn’t reach out to other groups. Rourke: It’s a central place that might be set up as a place for people to bring their children in a way that protects the city.

City Solicitor: It isn’t just about avoiding lawsuits; it’s about following the law. It’s very clear that the way we have the manger set up is a violation of the law. In respect to the effort to bring other symbols on board, there is a case that allowed it but it’s not been adopted by Federal courts in Massachusetts and it might not be. Every year, the city has received complaints from residents who are upset by a religious display at city hall. Once you open up government public space to religion, it’s open to all so you have no control over what gets erected.

Roll call: All nine councilors vote in favor of placement at city hall.

Roll call on motion to receive money to renovate: All nine vote yes.

24 Responses to Away in the (Lowell) manger