The polls open in 72 hours. The sprint to the finish line in the city election is upon us. Here are some observations from this past week.

Most noteworthy about the endorsement was the very mixed message it sent. Accurate or not, there’s a perception in the city that there are two distinct groups of council candidates. Factors that contribute to that perception range from positions on whether a city manager should have a contract to whose signs are grouped together in certain yards.

The eight candidates endorsed by the Sun are almost evenly split between those two groups (I’ll leave it to each reader to decide the distribution). The candidates who weren’t endorsed can be similarly split. So what message is the newspaper sending? There was an opportunity by the roster of candidates endorsed to embrace a clear vision one way or the other. Instead, the message was distinctly mixed, more suggestive of tradeoffs by those individuals participating in the endorsement process than a unified institutional embrace of a coherent strategy for the city’s future (“If I can’t have Rodney Elliott, then you can’t have Bill Martin.”)

Someone else who sees two distinct groupings among the council candidates is Kendall Wallace. After cataloging all of the good things happening in the city right now (“Maybe it’s because these are, in fact, the best times for the city government and for the city as a whole that I have seen in decades. “), Wallace, in this week’s Saturday Chat, says this:

In two articles on consecutive days this week, Lyle Moran wrote about each council candidate’s position on contracts for city managers. I summarized and linked to the two articles in a blog post. Chris and Aurora of Learning Lowell also have a post called “Second Thoughts on Sun Debate” that provides more information on where the candidates stand on this issue

I think it’s important for a city manager to have a contract, preferably a long one. Rather than cause complacency, a contract provides the kind of job security that allows a city manager to look beyond the results of the next council election and pursue strategies that have greater long term benefit for the city. I suspect one of the reasons Lowell’s political culture is so ambivalent about contracts for city managers is that most of our city managers have been former elected official who had long before becoming city manager grown used to living with the relative job insecurity of holding elective office (i.e., the voters could oust you every two years). Having learned to live with that uncertainty plus having the self-confidence in your ability to win people over that is almost a pre-condition to running for office makes the former-elected-official-as-city-manager more willing to roll the employment dice on a contract-less position than would someone who by education and job experience is a trained governmental administrator. Those in the latter category treat holding managerial positions in government as part of a career and are understandably desirous of a reasonable degree of job security.

While the debate over the best approach to public safety will undoubtedly continue past the election, perhaps having the election over with will make that debate more productive than it has been over the past month. Another factor that might be beneficial would be the selection by the city manager of a permanent police superintendent, whomever that might be. Back on October 24, the city manager hosted a “listening session” to allow the community to share its ideas about what characteristics the new police superintendent should possess. Fortunately for us, Chris and Aurora of the Learning Lowell blog were both in attendance and filed a report on their website.

Flyers at the front door

Here’s what arrived in the mailbox or doorstep this week from city council candidates:

Plus literature dropped on Saturday at our door by

Also in the mail from school committee candidates:

Bill Samaras has a notable ad in today’s Sun. It’s a photo of him and Ed Davis, the just departed Boston Police Commissioner who served as Police Superintendent in Lowell before that. In the ad, Davis says that Samaras will bring the same commitment to safety to the city council that he demonstrated at Lowell High. 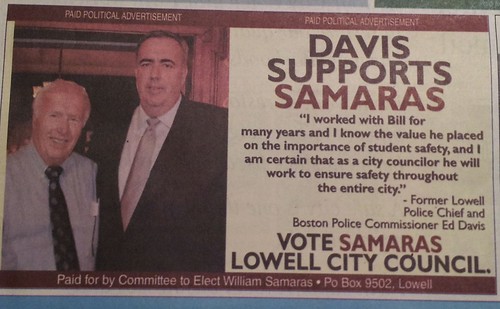 The Cambodian Mutual Assistance Association had a large crowd at its 29th Anniversary celebration on Saturday night. There are more than 7000 people with Cambodian surnames registered to vote in Lowell. I’m not sure many of them voted in this year’s preliminary election, but Cambodian people were a big component of the coalitions that helped Elizabeth Warren and Ed Markey win Lowell by double digits in the last two US Senate elections. I also believe they were decisive in Vesna Nuon’s election to the council two years ago. How Vesna and also Van Pech do this Tuesday relative to their performance in the preliminary will be an important measure of the willingness of the Cambodian people to engage in the local election.

The Sun’s political column today leads with the Greater Lowell Vocational High School superintendent process and then jumps past Tuesday’s election to speculate on who might be the city’s next mayor. According to the Column, the two front runners now are Rodney Elliott and Ed Kennedy with Marty Lorrey the dark horse.

For election returns on Tuesday night, please tune in to Lowell cable channel 8 on LTC (or www.ltc.org if you’re outside the city). State Senator Eileen Donoghue will anchor an LTC production live from the Blue Shamrock. She will be joined by former State Senator Steve Panagiotakos, the Lowell Sun’s Chris Scott, and me to discuss the election and to analyze the returns as they come in.

Mark your calendars for Saturday, December 7, 2013 for the First Annual Lowell Social Media Conference at LTC (246 Market St) from 10 am until 1 pm. The event is free but advance registration is requested. (Register by emailing me your intent to attend at DickHoweJr@gmail.com). One of the topics of discussion will be the use of social media in the city election. For more information, check out my blog post about the event.

Finally, it’s often been said that the most effective political commentary is satire. Following the city council fantasy draft on the Sons of Franky Cabot website this week strongly supports the accuracy of that statement. If you want to know what this election is really about, check out their entire series of posts on the council candidates. Be sure to scroll all the way down to Round 1, Selection 1 and start there to get the full effect.