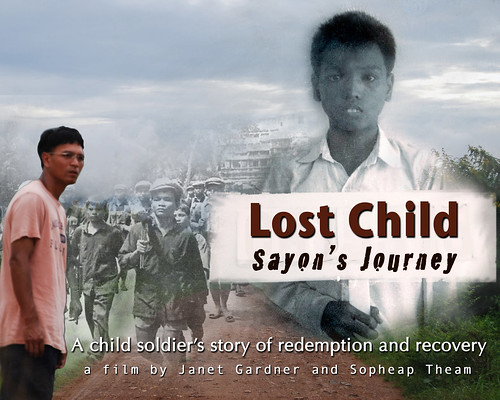 I saw “Lost Child – Sayon’s Journey” at it’s Lowell premiere. It’s an excellent film that provides important insight into the experience of many of our Cambodian neighbors here in Lowell. Please consider attending this free screening at UMass Lowell. The film’s website is here and the following release tells more about the film:

In the film, Soeun confronts his childhood experiences during Cambodia’s darkest hour; revealing for the first time what he witnessed and struggled with as he came of age during the Khmer Rouge genocidal regime.

Soeun was abducted at age 6 and exploited by the Khmer Rouge – his family life and education stolen. His recovery and redemption from unimaginable evil entails his transition from an orphanage in a refugee camp to his adoption by a loving American family in Connecticut. Now in his 40s, Soeun directs a charity called Light of Cambodian Children in Lowell, Mass., where he lives with his wife and child.

The 2013 film, winner of a CINE Golden Eagle Award, follows Soeun’s return to Cambodia where he finds family members who had lost but never forgotten him. Director and co-producer Janet Gardner says Soeun’s story shows “how children can be so easily exploited in war. I admire his ability to redeem himself from unimaginable evil and turn his life around after being a witness to so much genocide.”