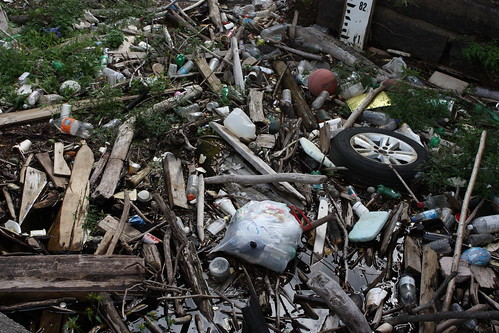 The sign says “Hamilton Canal Wasteway” and boy, is it aptly named. I was wandering around downtown Lowell with my camera late yesterday preparing for an upcoming tour I’m leading for a UMass Lowell class. I circled from the Lower Locks garage through across East Merrimack and Bridge to the Boott Mills. Then cutting through Lucy Larcom Park, I passed by the National Park Visitor Center on Market Street and cut through their Dutton Street parking lot to emerge at the Lord Overpass end of the Hamilton Canal District. I really enjoy visiting the Hamilton Canal District. Every time I do it seems one more building has been renovated and trying to envision what the new courthouse will look like on the big open space at the end of Jackson Street is always a challenge.

Wandering down Jackson Street past new apartments, the Lowell Community Health Center and the Edward Early Parking Garage, I turned in to the parking lot that leads to Loft 24, a great condominium complex that’s tucked away next to the Pawtucket Canal. I’d visited someone living there previously and had made a mental note to return with my camera to photograph the exterior of the building. To get to Loft 24, however, you have to pass the old Adden Furniture mill building which has yet to see any renovations. Next to it is the end of the Hamilton Canal. The Hamilton comes off the Pawtucket Canal at the Dutton/Fletcher Street intersection then flows down alongside Jackson Street, providing in the days of active mills, power for the Appleton and Hamilton Mills. Before reaching Central Street, however, the Hamilton Canal narrows and makes a 90 degree turn to the left where it flows underground past the Loft 24 building and back into the Pawtucket.

Right where the Hamilton makes that left turn which is the last part of it that is above ground, there is an enormous concentration of debris ranging from tree limbs to a giant stuffed teddy bear, all congregating right at the entrance to the Loft 24 facility. It’s a stunning sight, and not stunning in a good way. I’m not sure who is responsible for that end of the canal, but the size and scope of the debris would have to quality as a public nuisance. Someone who I took to be a resident of Loft 24 who walked by as I was photographing this debris made some comments that made it clear the people in that complex are very angry and frustrated by this situation. For all the money being spent on the Hamilton Canal project, it doesn’t make sense to have one of the gateways to the area looking like this. 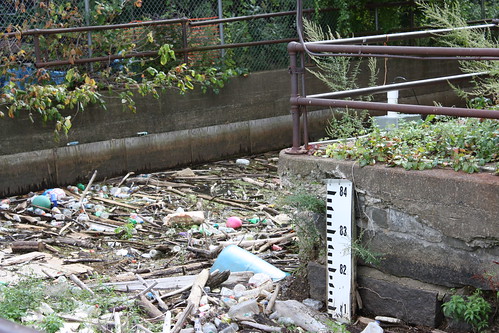 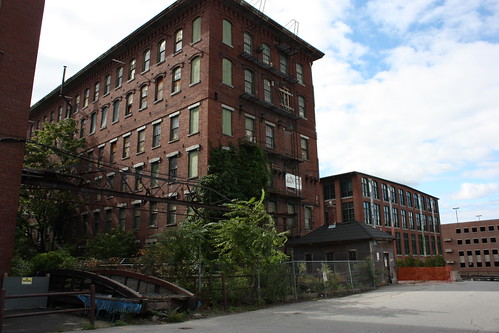 “Wasteway” within fenced-in area in foreground, then Adden Furniture building. Loft 24 in background. Back of Market Street parking garage to far right.

One Response to Hamilton Canal Wasteway