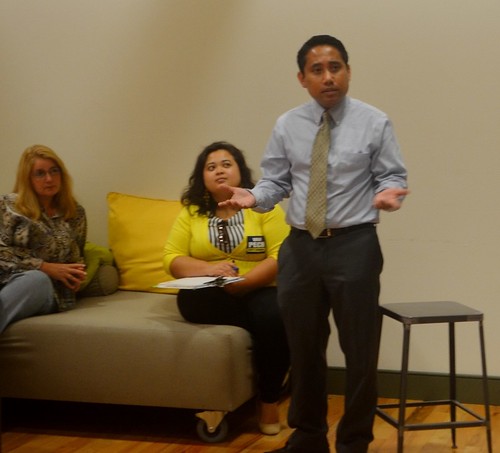 Van Pech, a candidate for Lowell City Council, hosted a listening session for artists on August 21 at the Appleton Mills on Jackson St. His campaign shared the above photo and the below press release. (Campaigns may email similar information to DickHoweJr@gmail.com for posting):

The arts and culture scene is often cited as among the City of Lowell’s greatest resources. But can local elected officials be doing more to support and cultivate the very drivers of the creative economy? That was the question council candidate Van Pech sought to answer Wednesday night at a special listening session and discussion dedicated to exploring the needs of Lowell’s vibrant artist community held at the recently renovated artist live-work lofts at Appleton Mills on Jackson St.

“When people talk about the different communities in Lowell, they often focus on ethnic groups or physical neighborhoods,” Pech remarked. “Every year it becomes clearer that the artists, and creative people in general, are an important community of their own with specific needs and issues. If we want the city’s creative economy to be an economic driver, we need to listen to those who are doing the creating.”

Attendees spoke to several concerns they have as artists working and living in the city, ranging from keeping housing affordable, to the reality of dwindling grant opportunities, to the impact of public safety and the city’s overall perception on the cultural sector. Pech’s campaign expressed a desire to support several existing efforts designed to help artists including Mayor Patrick Murphy’s recent motions to explore “a percent for the arts” and incorporating public art into the City Manager’s Neighborhood Impact Initiative. But for many in attendance, simply having a council candidate listen to their concerns as artists was something new.

“I have heard a lot of candidates and politicians talk about supporting artists, but Van Pech is the first candidate to actually come to speak to me and seek out my specific issues as an artist trying to make a living in Lowell,” said Appleton Mills resident, Oscar Alberto Brogan, a visual artist and teacher. “That is very impressive.”

Van Pech’s experiences as the current chair of the Southeast Asian Water Festival and a former co-chair of the Lowell Cultural Council, give him a particularly in-depth perspective on Lowell’s cultural sector amongst council candidates. He also cited how the cultural scene has grown in recent years and, that with the proper support, could thrive as a pipeline for the next generation.

Peter Veth, a Lowell resident fashion designer and dancer who was featured on the MTV show, America’s Best Dance Crew, also attended the listening session and described Pech’s commitment to the arts as inspiring and forward-looking. “It feels like a new beginning. We need to continue to reach out to the young people in Lowell and encourage them to explore their creativity. I believe Van will help make that happen.”