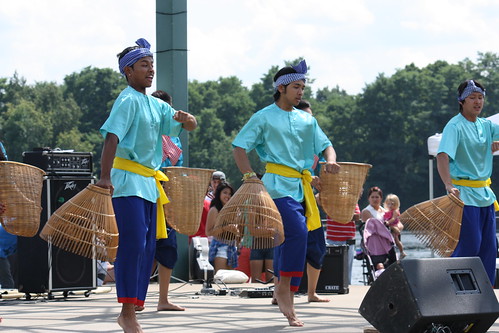 From the several hours I spent along the banks of the Merrimack this afternoon, I would judge the 2013 Southeast Asian Water Festival to be one of the best yet. More than 75 vendors set up booths and, judging from the canopy tents the lined the Vandenberg Esplanade, the vendors came from all over the eastern United States (Ohio State Buckeyes, New York Giants, Duke Blue Devils and UMass Minutemen were some I noticed). Walking through the Festival was a voyage of discovery between the retailers, food vendors and community organizations that were participating.

I had a huge helping of fried rice for lunch and washed it down with my first-ever fresh sugar cane juice drink. And it was fresh. As you can see from the photo below, one of the purveyors fed a two-foot long stick of sugar cane into the back of a silver appliance (see photo below). Out the front came the empty husk and out the side came a spurt of coffee-with-cream colored juice which trickled through a strainer and into a half-gallon plastic pitcher. Another worker would grab the pitcher and pour the fresh juice into a pint-sized plastic glass that was filled with ice. A cover was slapped on and a straw slipped into it. That was it. The liquid was very sweet and the drink was refreshing, especially on such a warm, sunny day.

Besides the food and retail there were musical and dance performances on the stage of the Sampas Pavilion and then the famous boat races that draw everyone’s attention to the river every time a heat began.

I won’t try to guess how many attended this year’s festival other than to say it was packed, mostly with families. And everyone appeared to be having a good time. If you’ve never been before, mark the third Saturday in August on your 2014 calendar and save the date. Finally, I’ve made a video slide show of some photos I took today. It can be seen at the very bottom of this post. 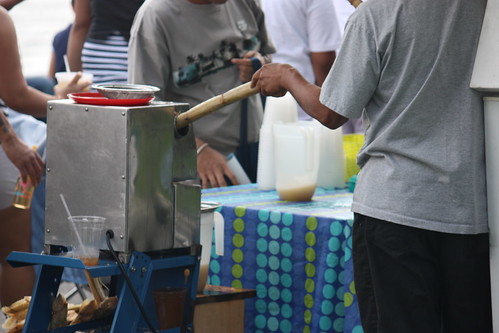