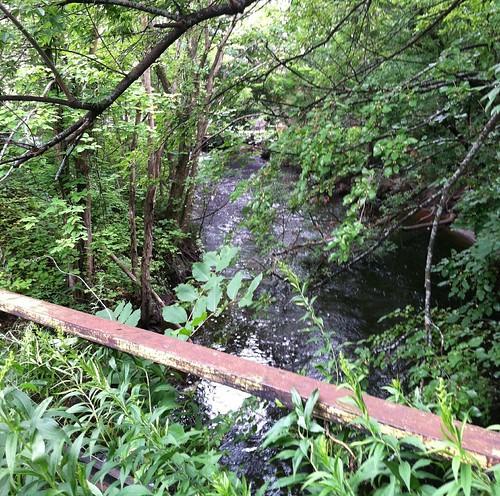 The other week my family took a trip out to Carlisle where Hale’s Brook begins in a quiet cranberry bog. We followed the brook from there through Great Brook State Park, and later Mill Pond, and continued on until we reached its start in Lowell at Cross Point. I’ve been walking in and around the brook, looking for the best way to connect a bike and pedestrian path from the Bruce Freeman Trail through the Highlands, Ayers City, the Bleachery and the Flats to the end of Hale’s Brook at the Concord River, as one of the last links in a statewide network. For my family, which settled and worked and played near the brook for nearly a century, it’s enormously important. The history of the brook in Lowell, however, has been a troubled one, with a number of industries contributing to its polluted condition for generations. Slowly, it has gotten better, but it is a project I am excited to work on.

Naturally, distraction from this work is what I find most frustrating about politics. So much energy is wasted each week on what is least important to the people we represent. I am not without fault. I am responsible for my own words. At a kickoff event for Van Pech the other week, I spoke of Van’s vote on the Zoning Board to allow a methadone clinic its special permit as the “lone vote that sought to do the right thing.” While I do believe that he reached the right conclusion—a belief that even the Sun’s May 28th editorial acknowledges—it should not be inferred that all the votes in opposition had knowingly done the wrong thing. I do not and did not think that the Zoning Board had acted improperly as a whole, but when one member receives a substantial campaign contribution ($250) from an opponent of the special permit only days before he is to rule on the matter, that gives the appearance of a conflict.

Much of my brief political career has been aimed at reducing the influence of money in politics. Indeed, I remain convinced that when a few use money as “political speech” the many lose the full power of their voices. I have certainly been paddling against that current. I have run for office without raising money, and won by spending less than any other successful candidate. We asked that people who wanted to donate, donate instead to local non-profit and charitable groups, which together received over $3500. We knocked on doors. We engaged our neighbors and shared ideas on how to make the city better. And when elected, I did my best to follow through. If that model were to be followed–even if somewhat modified–by many candidates, that’s bad news for the newspaper. It means less money for advertisements in the paper. It means less influence for the paper to wield in order to get more candidates to advertise in the paper.

In fact, we were told in my first run for City Council that I needed to play the game. Exactly four years ago tomorrow, Jim Campanini wrote to my brother, “The city is very divided politically—like it has been for awhile—and I don’t see any change in the near future. Maybe Patrick can reverse a bad trend: lack of leadership. But I don’t see it
happening without Patrick raising money and gaining name recognition throughout the city. Older voters don’t read the Internet.” In other words, you need to buy ink in the paper to win.

The Sun wants to swing away at “hypocrisy” and campaign finance “issues” which really amount to a clerical error not listing that the few donations made to my campaigns were, as the Sun has often reported during the campaigns, made by myself. It is a situation rarely seen by the Office of Campaign and Political Finance, which quickly considered the issue resolved with a few clicks on the computer. But here again is another distraction from the real and larger question of money in politics: Why should individuals with business before the city, be allowed to contribute to candidates and incumbents who might be in a position to influence decisions affecting their business? Does it not cease to be “political speech” when an individual spreads thousands of dollars around to more candidates than could possibly win? Does that not make it even slightly less likely that the public interest will win out over private interests? These are the questions that my proposed “Pay-to-Play” Ordinance sought to answer, that many of my colleagues thought unnecessary, that the newspaper—the original “pay-to-play” organization—did not want answered.

So there you have it. I have not played with the paper; I have paid their price for not doing so. But to remain silent about how money and influence and power are traded throughout this city, only serves to ensure that it continues. A critical editorial (is there any other kind?) or perhaps a chat some time ago actually warned about the paper being able to “buy ink by the barrel.” The underlying suggestion, I assume, is that there is nothing intrinsically truthful about the ink in the paper; that ink is but a commodity to be bought and traded by the barrel, in lieu of the truth if need be; that it matters not what is being written, but how much you can afford to pay for people to read it. Instead, my career has been staked on the belief that the truth, good ideas and a bit of indefatigability can make up the difference.

As I get ready to leave elective office, I remain hopeful for Lowell. While there have been decisions in its past that have negatively impacted our natural resources and quality of life in our neighborhoods, I have worked with many good people in our city government, and have seen what good work can be done in just a short time. This city is resilient and resourceful. Perhaps politics in Lowell may, in some ways, mirror the waters of Hale’s Brook which with stricter regulation is as clean as it has ever been in recent times. Yet let’s be clear—both could be cleaner still—and as long as I am here, I am willing to work to make it so.