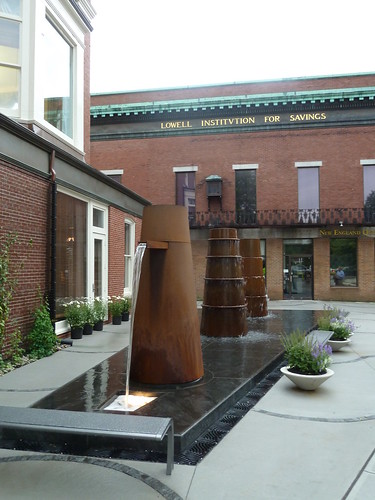 The city’s newest park was officially dedicated tonight. Named for the founder of the Enterprise Bank & Trust Company, George L. Duncan Park sits alongside the bank’s main branch at the corner of Merrimack and Shattuck Streets. More of a public art installation than a greenspace, the Park was designed by George and Carol Duncan’s daughter Alison who is a landscape architect. The construction of Duncan Park represents the story of the city of Lowell. The three steel “stacks” represent the city’s rapid industrialization, their “weathering” finish (i.e., they rust) symbolizes the period of its decline, the flowing water represents the rivers and canals which are the reason the city exists, and the overall design captures the city’s revitalization and the Enterprise Bank’s very central role in that revitalization.

The plaque that is mounted next to the park, designed by George and Carol’s son Andrew, reads as follows:

Lowell was founded upon the confluence of the Merrimack and Concord Rivers to become a nineteenth-century textile manufacturing empire. The city later faced urban decline when industry left the region. On January 3, 1989, George L. Duncan, a community banker and entrepreneur, founded Enterprise Bank here in the heart of downtown Lowell marking a rebirth of commerce and community involvement. This park, designed by George’s daughter, Alison C. Duncan, Landscape Architect, celebrates the many expressions of water and industry that have shaped Lowell’s history and represents its renewed energy and hopes for the future. Dedicated on June 18, 2013.

With rain threatening, several hundred attendees crowded into the bank’s first floor for the dedicatory program which featured remarks by Arnold Lerner (Vice Chair of the Bank’s Board of Directors), Jack Clancy (Chief Executive Officer) and Nancy Donahue (Honorary Director) as well as an explanation of the park’s design by Alison Duncan and finally, a personal reflection from George Duncan himself.

So next time you’re downtown, walk over the Shattuck Street and check out George L. Duncan Park, a fine addition to the streetscape of Lowell.