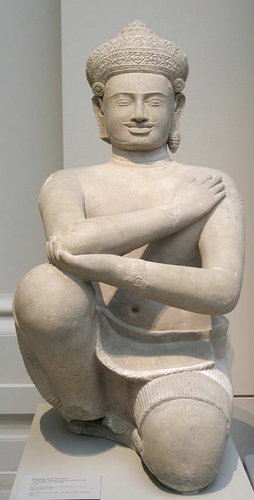 Many of us in Lowell have for years admired the beauty, grace and vitality of Cambodian culture. It seems like the rest of the United States is catching up. This past Saturday, the New York Times featured two separate stories about different aspects of Cambodian culture. The first explained how New York’s Metropolitan Museum of Art has agreed to return two prominent sculptures called “Kneeling Attendants” to Cambodia after determining that they were improperly removed from that country during the Khmer Rouge reign in the 1970s. The story, “The Met Plans to Return Statues to Cambodia,” offers much praise to the art museum for rapidly investigating the path taken by the statues from Cambodia to America and in refraining from litigating the issue of ownership by resolving any doubts in favor of Cambodian ownership. The statues will be returned to their original site, the Kor Ker temple which is 180 miles northwest of Phnom Penh.

The second story was a detailed review of the Royal Ballet of Cambodia’s performance of “The Legend of Apsara Mera” and the Brooklyn Academy of Music. The article explains much of the deep historic symbolism inherent in Cambodian dance while praising the intricacies and subtleties of the performance.