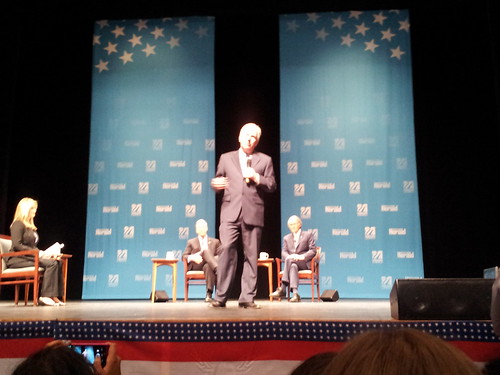 UMass Lowell continued to cement its reputation as a center of political activity in Massachusetts last evening with a debate between US Senate candidates Steve Lynch and Ed Markey at Durgin Hall (the three Republican candidates had been invited but chose not to participate). While the debate was not broadcast live on TV, it was streamed live on the Boston Herald’s website (the paper and UML frequently team up on political events like this). In the photo above, UMass Lowell Marty Meehan, a former Congressional colleague of both candidates, welcomes the crowd to UML. To the far left, is moderator Jaclyn Cashman. To the immediate left of Meehan sits Steve Lynch while Ed Markey is to his right. Out of the picture frame (and sorry for the fuzzy picture but the theater lighting confused my phone’s camera) sat three UML students, Corey Lanier of Lowell, Maria Cristina Garvin of Acton, and John Asagba of Ghana. The format consisted of a question from a student to one of the candidates who had one minute to respond followed by a rebuttal from the other candidate. Questions submitted through Twitter were also asked by the moderator who sometimes used her prerogative to ask follow-up questions.

Questions touched on the Affordable Care Act, reproductive rights, the affordability of college, opportunities for bipartisan action, and the “people’s pledge” about keeping outside money out of the race. Both candidates did well and things never got heated or dramatic. I’ve supported Ed Markey since the start of this race so I’m biased, but I did think his overall delivery was smoother and more consistent. Lynch gave some excellent answers but he seemed to struggle with a few of the questions.

The primary election is just three weeks from today on April 30. My guess is the turnout will be very low. Because I’ve been involved with the Markey campaign from the start, I have some insight into the strategy being employed. For Lynch, I can only discern what any other interested observer can see. I do think that two very different strategies are being employed and so the outcome of the race here in Greater Lowell might have some influence on the opinions local political activists will hold on what works better. As anyone driving around can see, the Lynch campaign has many yard signs up creating a great deal of visibility. In contrast, the Markey campaign has devoted its volunteers and resources to door-to-door canvassing (Markey is not using lawn signs). While there are certainly other factors that will effect this low-turnout race, the two distinct local campaign styles will invite comparisons after April 30. 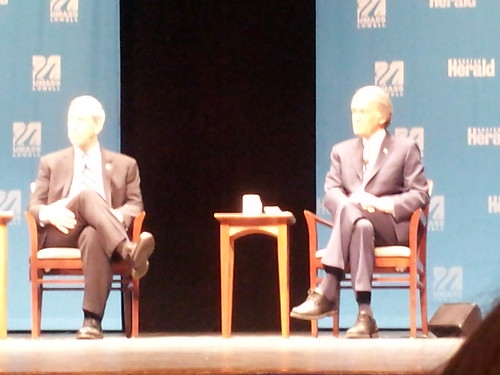