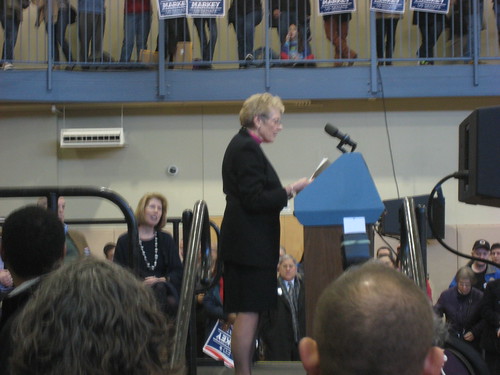 An early speaker at the Ed Markey announcement event who I found quite impressive was a woman named Ann Anderson. She told of how in 1972 her four year old son Jimmy was diagnosed with a rare form of leukemia. As Jimmy received treatment, Ann discovered that several other kids in their Woburn neighborhood had contracted the same cancer. She knew that the cause had to be either the air or the water and since Woburn’s water was notoriously bad, she focused on it. She spoke to many public officials back then, but their response was uniformly insensitive and uncaring. She was accused of being a hysterical mom. And then she met Ed Markey. He was Congressman Markey by that point and he asked for a meeting with her. At a time when no one talked about “the environment”, this was not a career enhancing move by Markey who asked only “what can I do?” Ann said that Markey’s sincere concern lifted a weight off her shoulders and they have been good friends ever since. Markey held Congressional hearings in Woburn and helped “lift the shroud of darkness from toxic waste in Woburn.” Markey went on to advance the cause of Super Fund legislation in Congress and has been a champion of environmental issues throughout his career. But to Ann Anderson and the families devastated by toxic drinking water, he is a hero. Jimmy Anderson died in 1981 at age 13. For those of you who ride the Lowell line on commuter rail into Boston, you know the familiar refrain from the conductor, “North Billerica . . . Wilmington . . . Anderson . . .” That last one is the Anderson Regional Transportation Center in Woburn. It was built in 2001 on top of a capped Super Fund site. It is named for Jimmy Anderson.