This coming Tuesday, January 29 at 7:00 p.m., Marie Sweeney and I will be hosting an informational meeting about Ed Markey and the coming special election for the U.S. Senate. Our meeting will be held in the ground floor Community Room of Lowell’s Pollard Memorial Library at 401 Merrimack Street. The purpose of the meeting is to learn about Ed Markey’s background, position on the issues, and voting record in Congress. We will also discuss the likely timetable for the special election to fill the U.S. Senate seat now held by John Kerry.

Because John Kerry has yet to be confirmed as Secretary of State, there is no Senate vacancy now so neither Ed Markey nor any of the other potential candidates have formally announced for the office. Consequently, this meeting is not part of the official campaign. Instead, it is an effort by two active Democrats, Marie and myself, to get an early start on the coming campaign. After all, the election will be held less than five months from today.

Ed Markey has represented Massachusetts in Congress since 1976. He has a long and distinguished record but few outside his Congressional District, which is centered in his home town of Malden, know him very well. I’ve studied Ed Markey’s record very closely and I like what I see. I will be enthusiastically supporting him in this race. As I’ve talked about his candidacy, many people in Greater Lowell have told me they would like to know more about him. That’s the purpose of this meeting. Even if you’re on the fence, please join us and listen to what we have to say. There’s no commitment and everyone is invited.

If you are interested in the campaign, please go to the “Lowell for Ed Markey” page on Facebook and “like” us. That’s the best way to get information and to follow events. If you want to communicate with me directly, send an email to DickHoweJr[at]gmail.com. Thanks, and I hope to see you Tuesday night. 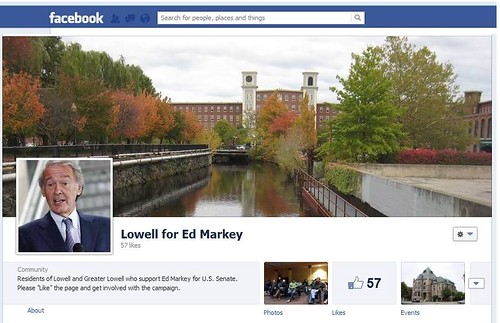